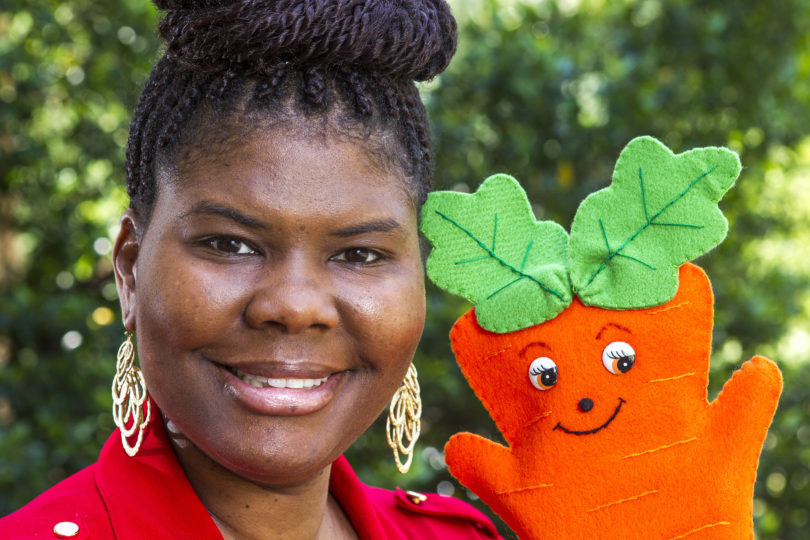 When Caree Cotwright was in kindergarten, she was asked to return to her Atlanta preschool to give a graduation speech. At 5, it was Cotwright’s first experience on stage. Ever since, she has loved all forms of the arts—from church plays to dance. It’s no surprise then that while studying nutrition in graduate school at UGA, Cotwright wrote a rap song and a play to teach African-American elementary school students about healthy eating and exercise.

During the past 10 years, Cotwright has used the arts to teach children ranging from preschool to middle school about nutrition and fitness. Now, the UGA alumna has returned to Athens to research childhood obesity prevention. Cotwright joined the UGA faculty last fall and plans to use arts-based techniques, such as puppet shows, to encourage healthy living.

“I’ve always had that creative side along with my scientific side,” said Cotwright, who is an assistant professor of foods and nutrition in the College of Family and Consumer Sciences and a member of UGA’s Obesity Initiative.

For her master’s thesis, Cotwright wrote a show called Lil’ Red Ridin’ Thru ‘da Hood, with advice from UGA theater and nutrition professionals. In the play, Gran’ma Jackson, loosely based on Cotwright’s mom, teaches characters Big Boy and Lil’ Red about the importance of healthy eating and exercise. The play showcased her nutrition rap, which features catchy lyrics like “Gotta cut the fat so I can do my body good, so I keep eatin’ fruits and veggies like I know I should.”

Cotwright partnered with UGA’s Black Theatrical Ensemble to produce the play in elementary schools in Atlanta and Athens. She paired the play with a follow-up curriculum and found that after the entire intervention, students said they would choose healthier snacks and more active hobbies.

“We saw overall that the students, the teachers and the parents loved the method of theater,” Cotwright said. “If the characters took a break between shows to eat, the kids were banging on the window while they were eating, saying ‘We want to see Lil’ Red!’ ”

Lil’ Red Ridin’ Thru ‘da Hood went on to tour in Philadelphia and Boston, and the rap, “What’s Best 4 Me,” is the theme song for a mobile produce market in Chicago.

Cotwright has since developed arts-based interventions for other ages. The Atlanta Falcons Youth Foundation, which funded her play while it toured in Atlanta, asked if she could do something similar for middle school students in Atlanta Public Schools. Cotwright made the project her doctoral dissertation and worked with students to create a health-related dinner theater performance.

“I think that putting something into a form that the students can respond to and relate to makes the message stronger,” said Freda Scott Giles, an associate professor in UGA’s department of theatre and film studies and the Institute for African American Studies. “You could say those same things in a lecture, but when you put it in the terms of a performance that people can enjoy, then it makes the message come through more clearly.”

After finishing her doctorate in 2008, Cotwright traveled to Baltimore to develop an arts-based intervention for yet another age group: preschoolers. The program used skits about a dog name Lil’ Lexie to teach preschoolers in the city’s Head Start program about food and physical activity.

Cotwright’s work with preschoolers landed her a job communicating obesity prevention guidelines for child care providers as a part of first lady Michelle Obama’s Let’s Move! Child Care initiative. Now, at UGA, Cotwright hopes to bring arts back in the mix as a way to help child care providers in Georgia give children a healthy start.