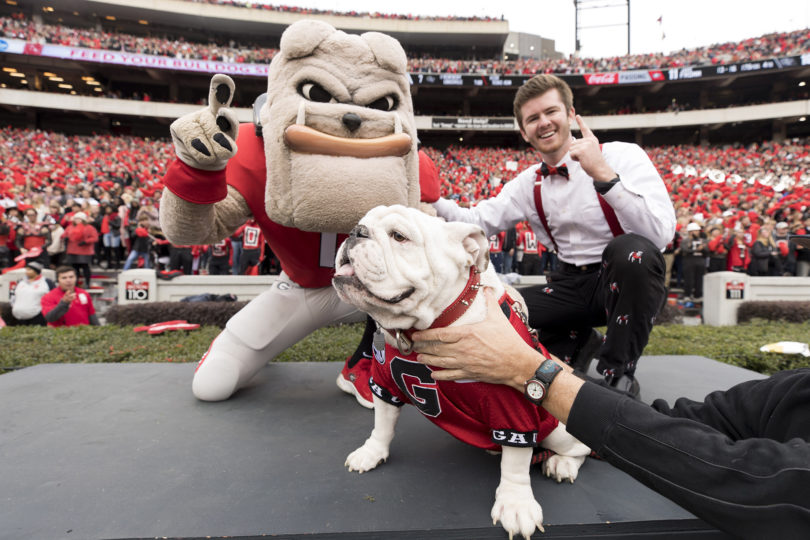 Chip Chambers has good company on the sidelines of UGA football games: Uga X and Hairy Dawg. Chambers has served as Mic Man for the last four years. (Photo by Andrew Davis Tucker/UGA)

(This story originally ran on Dec. 6, 2019. Chip Chambers has since made plans to attend the University of Pennsylvania Perelman School of Medicine in the fall.)

Chip Chambers has never been good at sitting still.

That’s why he dances all four quarters of University of Georgia home football games—and has for the last four years.

Decked out in suspenders and a bow tie, Chambers might be better known as the Mic Man, the hype man who fires up the fans and shows off his fancy footwork in front of the student section at Sanford Stadium.

And what most people don’t know about him is that he’s actually a scholar who spends a decent amount of his free time in the library or coffee shops. “My form of procrastination is reading health policy and theology,” he said. “Which is a really nerdy thing to say.”

Chambers is graduating this December with degrees in economics and biology; a minor in health policy and management; and certificates in interdisciplinary writing, and personal and organizational leadership.

A Foundation Fellow and a teaching assistant in UGA’s Honors Program, Chambers next plans to attend to medical school. He won’t sit still there either. He aims to get a dual degree—either a Master of Public Health or Master of Business Administration along with his medical degree.

Chambers draws his unrelenting energy from crowds—be it fourth quarter on game day, Honors prom or running into his friends on campus. 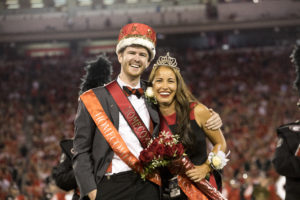 Chip Chambers was named Homecoming king in 2018. He is pictured with Avalon Kandrac, Homecoming queen. (Photo by Dorothy Kozlowski/UGA)

First and foremost, Chambers is a football fan. Growing up in Watkinsville as a third generation Bulldog, red and black is in his blood. He got discovered for his Mic Man role his freshman year. He’d been attending basketball games and, for better or worse, had built a reputation as that crazy dancing guy that just wouldn’t sit down. The athletics department took notice and asked him if he wanted to try out for the Mic Man position, which works in conjunction with the cheerleaders. Starting his sophomore year, Chambers joined the ranks of about a dozen Mic Men in UGA history.

“The first key to being a good mic man is to keep a pulse on pop music. You’ve got to know every song and you’ve got to know all the main dances. It doesn’t mean you have to be good at them,” he said. “Sometimes my sister or my roommates will text me a video and tell me there’s a dance I’ve got to learn.” For games, his go-to dance moves are the Dougie, the two-step, the stanky leg and hit the woah. 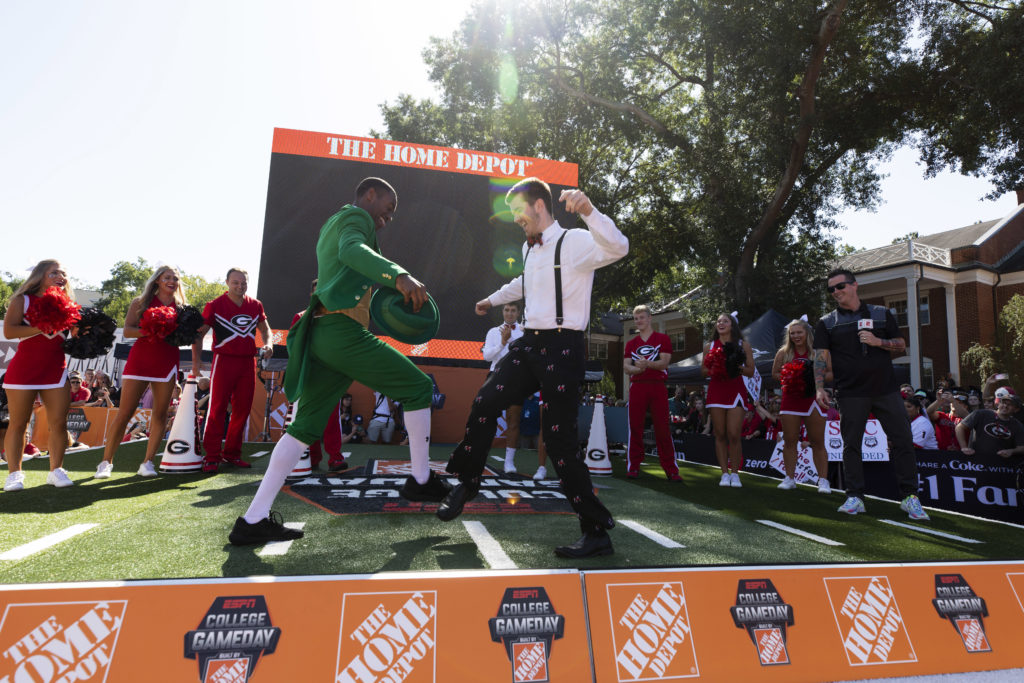 After four seasons at the gig, he said he’s learned to pace himself so “every time we score, I can act like we just won the national championship.” It’s all about a steady effort, while still giving it his all. “I don’t want to walk off that field with an ounce of energy left or with my voice still intact. So, if I’m not raspy the next morning, that means I’ve done something wrong.”

He worked in UGA’s Terns Lab for four semesters researching CRISPR-Cas, a genetic engineering technology. Through UGA’s Honors Program, he interned at the Greater New York Hospital Association. This past summer, he interned at Emory Healthcare in Atlanta working in its office of quality improvement and patient safety, and learned a lot about how to make the health care system more efficient, equitable, safe and patient-centered. For six years, he’s volunteered at Mercy Health Center, which serves the uninsured. 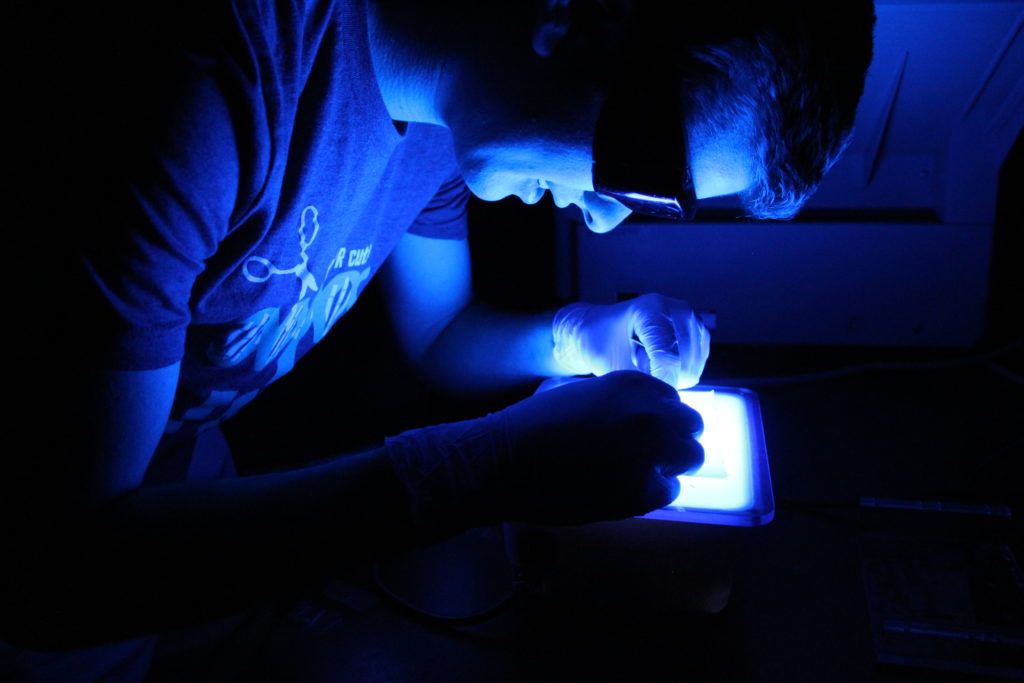 Chip Chambers has done research through the Center for Undergraduate Research Opportunities for several semesters. (Photo by Stephanie Schupska)

“Ultimately, I want to be a doctor because it’s the intersection of my interests in the life sciences and economics as well as an opportunity to join people at their absolute lowest,” he said. “Health care meets people at some of their worst moments in their life and I think as a doctor you have the opportunity to walk into a room where someone’s experiencing tremendous hurt and pain and say, ‘I think I might be able to help.’ And that’s pretty appealing to me.”

And as his time at UGA comes to an end, Chambers thinks back to lessons he’s learned both in the classroom and on the sidelines. “Almost nothing matters nearly as much as you think it does. I’m TA-ing a class for first-year students and I see them getting worked up about a lot of the exact same things I used to get worked up about,” he said. “I’ve been trying to learn the difference between what’s urgent and what’s important. Nobody on their deathbed says, ‘I wish I would have gotten a 93 instead of an 86 on that quiz.’ But people say, ‘I wish I would’ve spent more time with family,’ so I want to concentrate on my faith and being a curious, kind individual.” 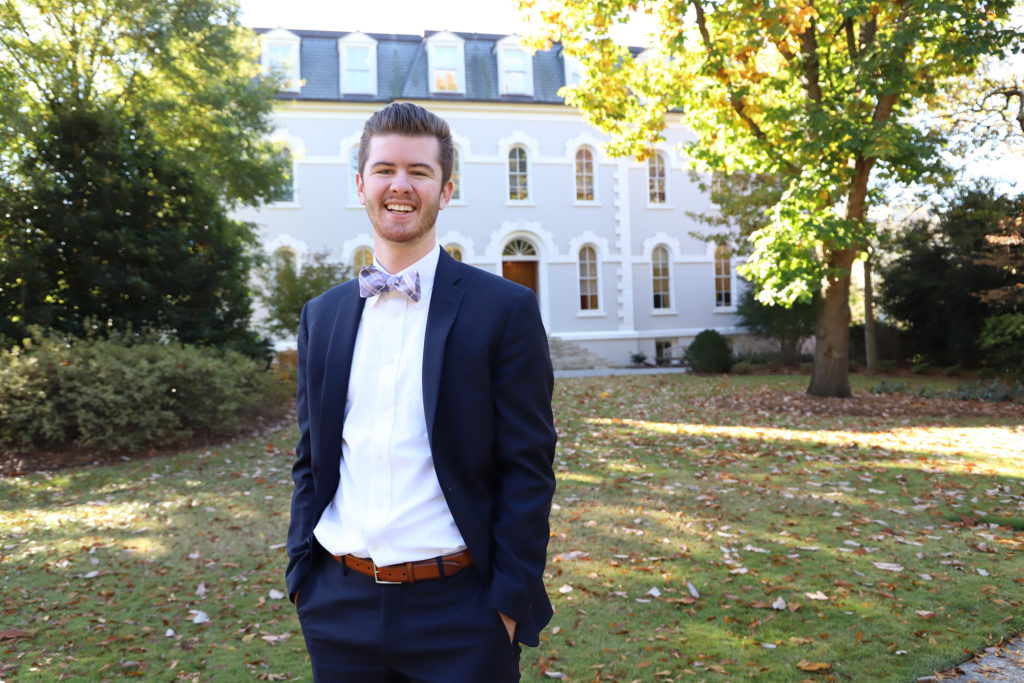 Chip Chambers is a Foundation Fellow. “I’ve learned that the most effective leaders are the people who started as just one of the people that they’re leading and ultimately still identify as one of those individuals,” he said. “So for me, I’m just another student. I’m not anywhere close to the level of Hairy Dawg who is held on a pedestal. But being an effective leader requires a sense of humility and a sense of staying down to earth.” (Photo by Stephanie Schupska)