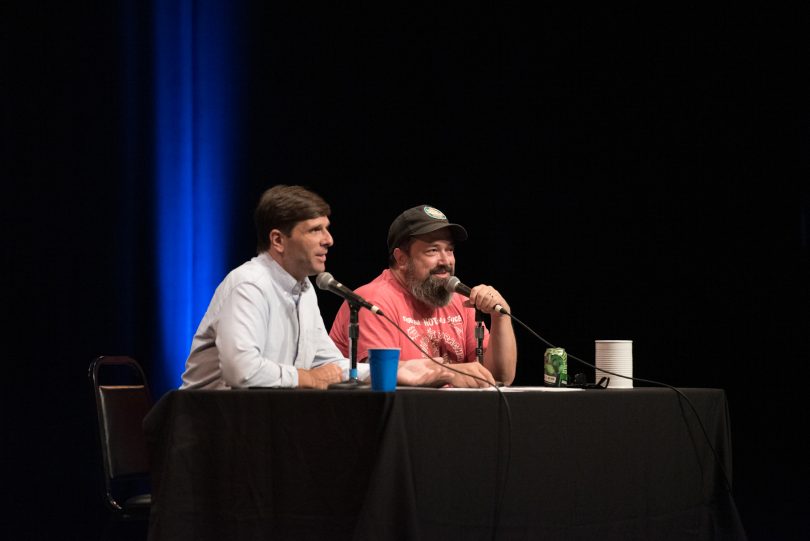 Chuck Bryant ABJ '95 (right) and Josh Clark M '00 not only co-host the popular podcast Stuff You Should Know, they also make frequent speaking appearances--like this 2019 event in Chicago. Those in-person appearances will be starting up again as the country emerges from the COVID-19 pandemic. (Photo by iHeartRadio/Vanessa Buholzer)

Stuff You Should Know is a podcast that educates listeners on a variety of topics ranging from science and history to pop culture and conspiracy theories.

How did you get into podcasting?

Josh Clark M ’00: Chuck and I started out as writers for the website HowStuffWorks. The guy running the site said, ‘You know what? Not everybody reads articles on the web all day long. So, let’s take these great, well-researched, well-written articles and turn them into something else.’

Did you meet while at UGA?

Clark: We shared a common wall at HowStuffWorks. We would do the prairie dog thing–we’d pop up and tell the other person the interesting things we just learned.

What is your favorite part about podcasting?

Chuck Bryant ABJ ’95: The immediacy and the connection. Podcasting is a very personal medium. Oftentimes we’re literally in people’s ears while they’re exercising, cleaning the house, or doing chores. I like to say we’re all friends and family; we just haven’t met yet.

What’s your favorite episode of Stuff You Should Know?

Bryant: I can’t think of an individual one, but it’s cool to shine a light on things that you didn’t learn in school or history class growing up. Many stories are not necessarily lost to time but just aren’t as well-known as they should be.

Clark: The episodes I find gratifying are about everyday topics that people think they know everything about. Then we explain all the interesting stuff about it. For that reason, I’m going to say the episode about ballpoint pens. That’s my current favorite. 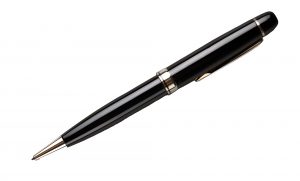 Have you seen a major change or shift in digital media over the last year because of the pandemic?

Clark: There was an enormous disruption in people’s habits. There was a fear that people would not  listen to podcasts as much, but we found the opposite. People who would never listen to a podcast before the pandemic found podcasts because they heard they might cheer you up or be a good distraction. I’m proud that we were able to help people feel a little bit better during the pandemic. It helped me keep working.

Bryant: As a company, we were able to shift quickly to remote recording our shows. And that’s one of the cool things about podcasting—people have been doing it in their basements from the beginning. So, making that transition was not bad.

What was it like writing a book for the first time? And congrats on it being a New York Times best-seller!

Bryant: Writing a book is something we wanted to do for a long time. We found a good publishing partner that made it really easy on us. It was a really fun experience.

Clark: It was an enormous challenge. I’ve always considered myself a writer, and when I became a podcaster, I didn’t write as much. I was glad to be doing it again.

Listen to Stuff You Should Know