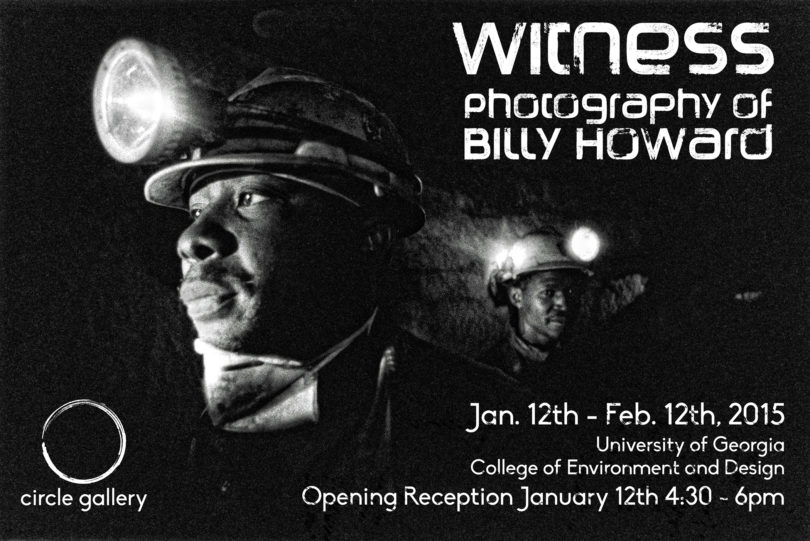 The Circle Gallery at the University of Georgia College of Environment and Design will host the exhibit "Witness: The Photographs of Billy Howard" Jan. 12- Feb. 12.

Athens, Ga. – The Circle Gallery at the University of Georgia College of Environment and Design will host the exhibit “Witness: The Photographs of Billy Howard” Jan. 12- Feb. 12. The opening reception, which will include a brief gallery talk by the artist, will be Jan. 12 from 4:30-6 p.m.

The images portrayed in “Witness” represent people in their environments, their land, their homes, their schools-where they belong. “There are no tricks of placement, just an attempt to represent both the person and his or her surroundings honestly,” said Howard, a documentary photographer, writer and videographer in Atlanta. “In these portraits I have tried to use the person’s environs to add to the viewer’s understanding of the subject.”

Howard received a 2011-2012 Rosalynn Carter Fellow in Mental Health Journalism and has spent decades creating portraits of people across the globe in extenuating circumstances. Past projects include an exhibit on people with HIV/AIDS with the Smithsonian Institute Folklife Festival; two group exhibits with Vogue Italia in Milan, Italy; contributions to documentaries for “Frontline” and HBO; a featured interview on CNN’s photo blog; and an exhibit on the blind and visually impaired, “Blind/Sight: Conversations with the Visually Inspired,” which is currently on tour. His exhibit “Witness” was chosen as the first work to be exhibited in the Centers for Disease Control and Prevention’s David J. Sencer Museum Lobby Gallery.

Howard’s work is in the collections of the Library of Congress, the CDC and the Carter Center, among others.

The Circle Gallery is located in the Jackson Street Building at 285 S. Jackson St.