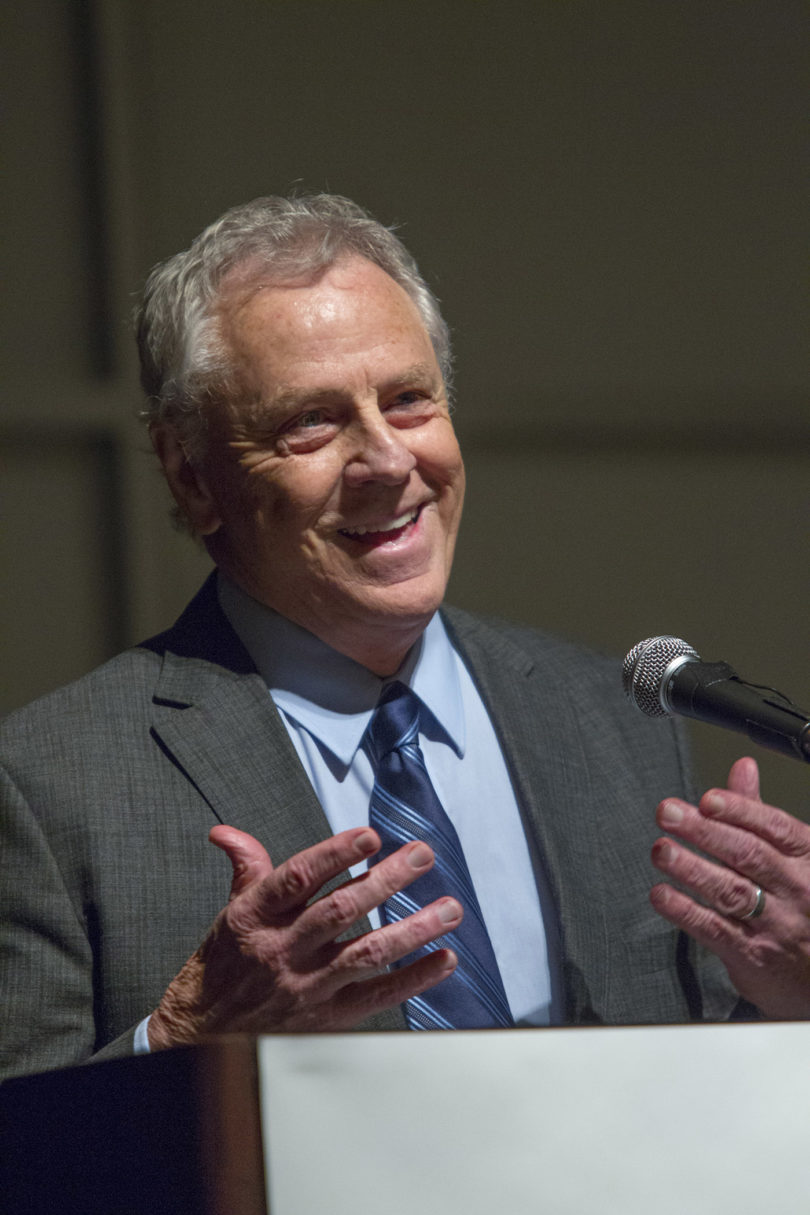 Morris Dees, co-founder and chief trial attorney of the Southern Poverty Law Center, had a challenge for the university community audience April 3 during the Donald L. Hollowell Lecture in Mahler Hall of the Georgia Center for Continuing Education.

The struggle for civil rights did not begin with the Brown v. Board of Education ruling, Dees said, and it didn’t end when Martin Luther King Jr. was assassinated in 1967. Instead, there are still social justice issues that need to be addressed including those involving immigrants, sexual and gender orientation, and bullying, he said.

“The march for justice continues,” Dees said. “You students who are here tonight, and the adults also, have a front row seat to that march for justice. I challenge you not to keep that seat but to get up and get involved.”

Dees, a native of Shorter, Ala., is best known for winning multimillion dollar lawsuits in discrimination cases against hate groups. After the bombing of an Alabama church in 1963 killed four African-American girls, Dees and fellow lawyer Joseph Levin Jr. began providing free legal representation to victims of prejudice. The pair co-founded the SPLC in 1971. In the decades since, the center has removed barriers to equality for African-Americans, women, the disabled and the LGBT community, and advocated for humane treatment of incarcerated youth, immigrant workers and other marginalized groups.

During the lecture, Dees recounted stories of discrimination perpetrated by the Ku Klux Klan in the South-including a lynching case against an African-American man in Alabama and a case of harassment against Vietnamese immigrant fishermen in Corpus Christi, Texas.

In both cases, the legal system worked to provide justice for the wronged. Dees said the heroes in these cases were the “foot soldiers for justice” who agreed to be plaintiffs in court to stop discrimination for future generations.

In closing the lecture, Dees predicted the current class of students is poised to help create a better and more diverse America. One day, Dees said, there will be a book written about this generation.

“I think it’s going to be a book about America’s greatest generation,” Dees said.

Dees met with students after the lecture to talk about how create a more inclusive and friendly campus.

The Hollowell Lecture is named for the attorney who led the legal battle that brought about the desegregation of UGA in 1961. Louise Thornton Hollowell, the 100-year-old widow of Donald L. Hollowell, was in attendance and received a standing ovation from the audience when her name was called.