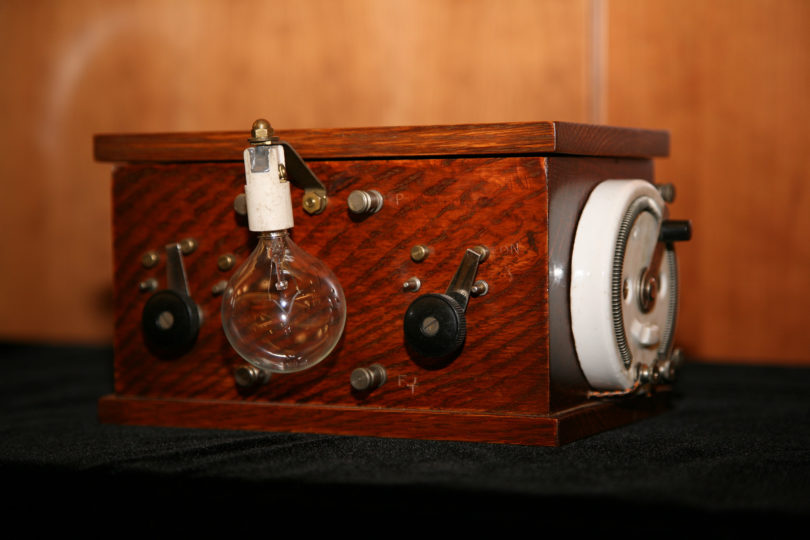 An exhibit of radios from the early 1900s

Athens, Ga. – An exhibit of radios from the early 1900s, the beginning of the age of electronic mass communication, will open Feb. 20 at the University of Georgia Richard B. Russell Building Special Collections Libraries.

The Pennington Radio Collection features tube radios, external speakers and other artifacts dating from 1913 to 1933, restored by the late Claude L. Pennington Jr. of Macon. A physician who specialized in microsurgery of the inner ear, Pennington was fascinated by another intricate mechanism: the tube radio.

“The triode vacuum tube, invented in 1906, sits at the headwaters of the electronic age,” said archivist Mary Miller of the Brown Media Archives and Peabody Awards Collection. “These radios, many of them exemplars of the design sensibilities of their era, offered a dynamic and immediate connection to the modern world and set the stage for the television and information revolutions that would follow.”

Radios on exhibit, many approaching 100 years old, were crafted of materials such as mahogany, brass and bakelite and are in working order. The exhibition will be on display until the end of the year.

A program celebrating the exhibition opening will be held Feb. 20 at 3:30 p.m. in the auditorium of the Russell Special Collections Building. The event will feature period music from one of the radios in the collection, which was donated to the UGA Libraries by Pennington. The program begins with a tribute by Pennington’s longtime friend Bill Jackson and comments from Jay Hamilton, an associate professor in the Grady College of Journalism and Mass Communication. Hamilton will discuss the role of radio in the culture of the 1920s and 1930s. The event is open free to the public.