When Madison took her first tentative steps as a 1-year-old, her parents noticed she seemed to favor her right side and tended to swing her left leg around as she ambled across the floor.

It’s not uncommon for children to struggle a bit when they’re first learning to walk, so Madison’s pediatrician suggested they wait to see if she improved.

But the problem persisted for months, and she was eventually sent to a specialist. That’s when her parents learned that Madison had cerebral palsy.

“When we got the diagnosis, it honestly hit me like a ton of bricks,” said Courtney Brown, Madison’s mother. “You have all the hopes and dreams for your child, and now you wonder what the future holds.”

But Madison’s parents were not going to let this diagnosis define their child. 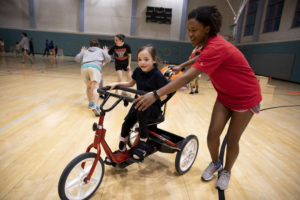 “We want her to set her limits,” Brown said. “If she wants to achieve something, she’s going to do it, and we’re not going to let this condition stop her or dictate what she can and can’t do. For her, the sky’s the limit.”

“Madison is one of the best parts of my week,” Hollingsworth said. “Working with her one-on-one was so much fun, and I hope she remembers what she learned from the clinic.”

Since she started working with Hollingsworth, Madison has learned to swim, her mobility has improved and she can walk on a balance beam with very little assistance. But perhaps the most noticeable change has been in Madison’s confidence. 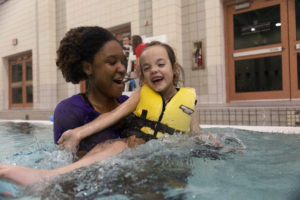 “When she first started, she was really, really shy; if a stranger talked to her she would hide behind me or her dad,” Brown said. “It’s a big confidence booster to see her come out of her shell. They’re pushing her to do things that she didn’t think she could do, and they support her and say, ‘Yes, you can do this, let us help you figure out how you best do it.’”

The clinic, which is part of UGA’s College of Education, has been in operation for more than 40 years, and it was developed by Ernie Bundschuh, professor emeritus of physical education.

It is a nine-week program held each fall and spring semester that is open to individuals with disabilities age 2 to 14. Each child is paired with a UGA student enrolled in an adapted physical education class who develops an exercise program that is supervised by faculty and graduate students.

The program is $30 per child, per semester, and enrollment is limited depending on the number of UGA students enrolled in the class.