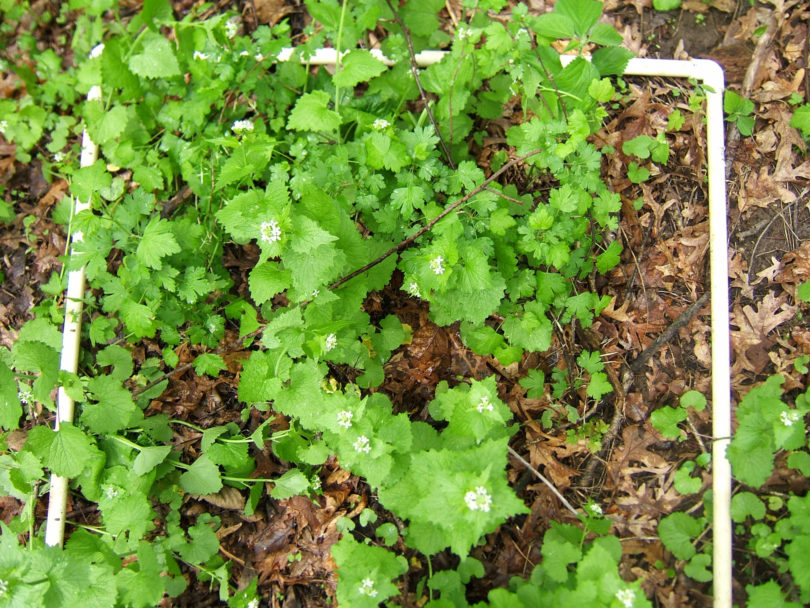 Garlic mustard was introduced to the U.S. from Europe roughly 150 years ago

Athens, Ga. – Invasive species such as kudzu, privet and garlic mustard can devastate ecosystems, and, until now, scientists had little reason to believe that native plants could mount a successful defense.

A new University of Georgia study shows that some native clearweed plants have evolved resistance to invasive garlic mustard plants—and that the invasive plants appear to be waging a counterattack. The study, published in the early edition of the journal Proceedings of the National Academy of Sciences, is thought to provide the first evidence of coevolution between native and invasive plant species.

“The implications of this study are encouraging because they show that the native plants aren’t taking this invasion lying down,” said study author Richard Lankau, assistant professor of plant biology in the UGA Franklin College of Arts and Sciences. “It suggests that if you were to take a longer view—a timescale of centuries—that exotic species could become integrated into their communities in a way that is less problematic for the natives.”

Garlic mustard (Alliaria petiolata) was introduced to the U.S. from Europe roughly 150 years ago first in New York and Virginia and then to the Chicago area. The noxious plant continues to spread rapidly throughout the Northeast, Midwest and Southeast. “It’s a pretty well-hated plant,” Lankau said, because it can form dense carpets in forest understories and, even after being physically removed from an area, can reestablish itself within a year.

Much of the plant’s success is a result of the chemical warfare it wages with a compound known as sinigrin, which kills fungi that help native plants extract nutrients from the soil. The chemical is relatively new to North America, and this novelty gives garlic mustard a huge competitive advantage.

Through a series of greenhouse and field experiments conducted over three years in five states, Lankau has shown that invasive garlic mustard produces more sinigrin in areas where more local plants are present. He found that native clearweed (Pilea pumila) plants, which were chosen for the study because they occupy the same forest understory habitat, show higher levels of resistance to sinigrin in areas where the two species have a longer history of coexistence.

“It looks like the native plants have evolved in response to the traits of the invader,” Lankau said.

In addition to transplanting clearweed seeds back to their sites of origin, Lankau also planted them in all of the other study sites and monitored their growth. Each site has its unique soil chemistry and climate, and Lankau said he expected the plants to exhibit a home-field advantage. Instead, he found that native plants resistant to the invader did best in heavily invaded sites, regardless of where they originated. Surprisingly, he found that plants resistant to sinigrin actually did worse than their less-resistant-plant counterparts in areas where there was little or no garlic mustard.

“It’s not all good for those populations that are evolving tolerance,” Lankau said. “Because they are less successful in the absence of garlic mustard, their resistance to the invasive species comes at a cost.”

Taken together, the findings suggest that the native and invasive species could reach equilibrium over a long period of time. Lankau said the study also raises the possibility that humans can help speed the adaptation of ecosystems to invasive species. He explained that removing invasive species and replanting natives often results in failure but replacing invasive species with native plants from an area where the plants have had time to adapt to the invader could be more effective. Rather than replanting clearweed from a recently invaded site in Michigan, for example, land managers could use plants from New York that are more likely to be resistant to garlic mustard.

“When people talk about evolution, it’s usually in the past tense,” Lankau said. “But one of the important messages from this study is that it’s an ongoing process that can happen fast. And this study suggests that we might be able to jumpstart that process through evolutionarily informed management.”

The research was supported by the National Science Foundation.