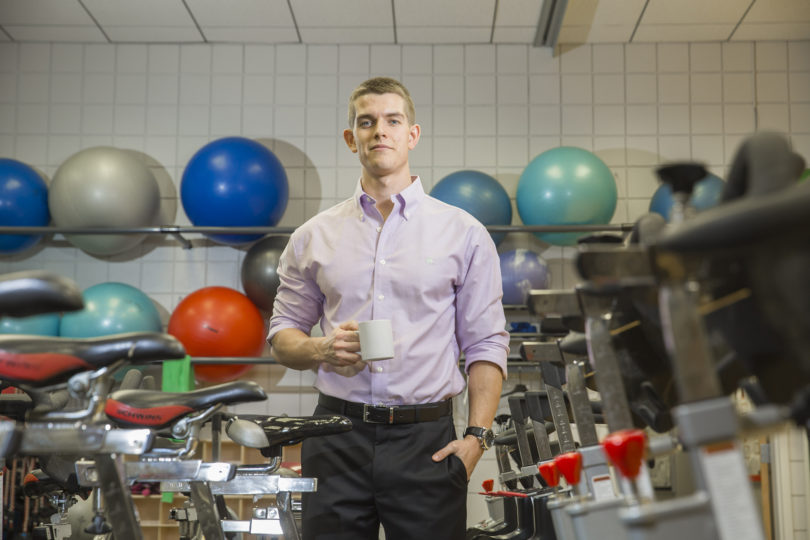 Simon Higgins is studying caffeine—particularly from coffee—and how it may improve endurance performance. (Credit: Peter Frey/UGA)

Athens, Ga. – The caffeine in a morning cup of coffee could help improve athletic endurance, according to a new University of Georgia review study.

Authored by Simon Higgins, a third-year doctoral student in kinesiology in the College of Education, the study was published in this month’s issue of the International Journal of Sport Nutrition and Exercise Metabolism.

To research the issue, Higgins reviewed more than 600 scholarly articles and screened them for those that focused only on caffeinated-coffee conditions, measured the caffeine dose and measured an endurance performance. Of these, nine randomized control trials specifically used coffee to improve endurance.

“Previous research has focused on caffeine itself as an aid to improve endurance,” Higgins said. “Coffee is a popular source of caffeine, so this paper looked at the research surrounding its ergogenic benefits.”

Looking at the nine trials, Higgins found that between 3 and 7 milligrams per kilogram of body weight of caffeine from coffee increased endurance performance by an average of 24 percent. The amount of caffeine in a cup of coffee can vary from 75 mg to more than 150, depending on the variety and how it’s roasted and brewed.

“This is helpful for athletes because coffee is a naturally occurring compound,” Higgins said. “There’s the potential that getting your caffeine by drinking coffee has similar endurance benefits as taking caffeine pills.”

In the nine trials, participants either cycled or ran after drinking coffee. They then exercised vigorously and the results were measured. In a majority of cases, endurance was noticeably improved after the use of coffee.

“While there is a lack of high-quality research on coffee as a source of caffeine, there is an abundance of research on pure caffeine,” he said. “It’s surprising how little we know about caffeine from coffee when its endurance effects could be just as beneficial as pure caffeine.”

Higgins said that coffee shouldn’t be dismissed as less beneficial for endurance. He found that coffee appears to be just as helpful as taking caffeine in the form of powder or tablets.

“There’s a perception that coffee won’t give you the same benefits as pure caffeine,” he said. “New research could mean that athletes could have a cup of coffee versus taking a pill.”

Higgins says that more research is needed before giving official recommendations to athletes, especially since the amount of caffeine in a cup of coffee can vary depending on how it’s prepared.

“There is a caveat to athletes using coffee: Be careful because you don’t know how much caffeine is in some coffee, especially when it’s prepared by someone else,” he said. “Athletes should run their caffeine use through their sports dietician as the NCAA lists it as a banned substance.”

Co-authors of the paper are Richard D. Lewis, UGA Foundation Professor in Family and Consumer Sciences, and Chad R. Straight, previously a graduate student at the University of Georgia.

An abstract of the study, “The Effects of Pre-Exercise Caffeinated-Coffee Ingestion on Endurance Performance: An Evidence-Based Review,” is available at http://www.ncbi.nlm.nih.gov/pubmed/26568580.