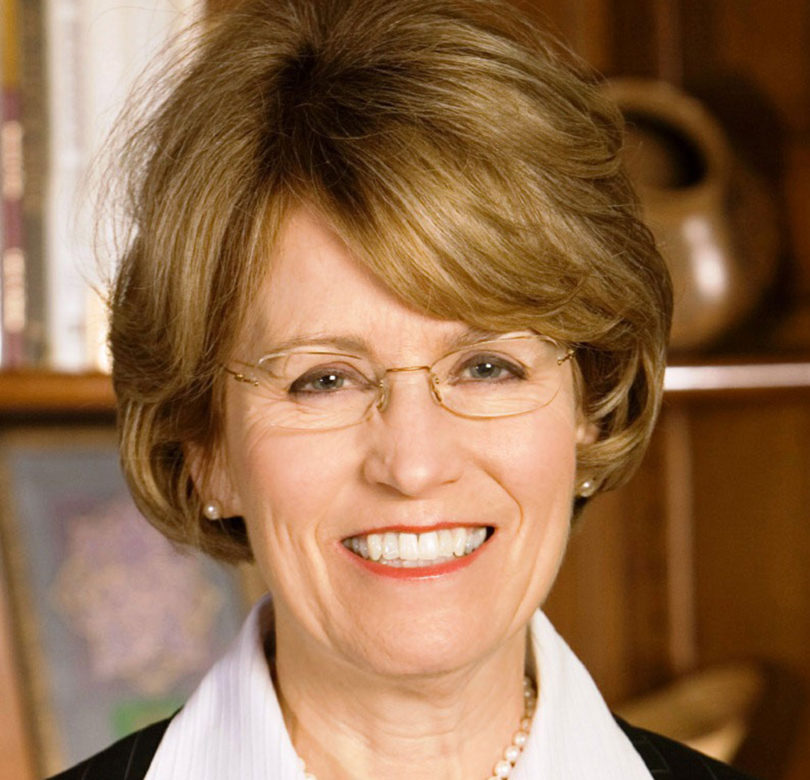 Athens, Ga. – Mary Sue Coleman, president emerita of the University of Michigan, will present the 26th Annual Louise McBee Lecture Dec. 2 at 11 a.m. in the University of Georgia Chapel. The event is free and open to the public.

Coleman will speak on “Public Higher Education in the 21st Century: Can America Continue to Lead?”

“Dr. Coleman’s career is exemplary of what the McBee Lecture stands for-integrity, leadership and innovation in higher education,” said Libby V. Morris, director of the Institute of Higher Education and Zell Miller Distinguished Professor in Higher Education. “We are delighted that President Coleman has agreed to share her experiences and observations regarding public higher education with the university community.”

Coleman served as the 13th president of the University of Michigan from August 2002 until July 2014. Under Coleman’s leadership, the University of Michigan launched and expanded academic partnerships with universities in China, Ghana, South Africa, Brazil and India. She also announced a groundbreaking partnership between the university and Google, which enables the public to search the text of the university’s 7-million-volume library and opened the way to universal access and the preservation of recorded human knowledge. In 2009, Time magazine named her as one of the nation’s “10 best college presidents.”

Her leadership positions in higher education have included membership on the National Collegiate Athletic Association board of directors and the Knight Commission on Intercollegiate Athletics. She was chair of the Association of American Universities, which encompasses 61 leading public and private research universities in the United States and Canada. She also served as chair of the Internet2 board of trustees.

Elected to the Institute of Medicine, Coleman also is a fellow of the American Association for the Advancement of Science and of the American Academy of Arts and Sciences. She co-chaired a major policy study of the Institute of Medicine, examining the consequences of uninsurance, and has become a nationally recognized expert on the issue. She also is a trustee of the Gerald R. Ford Foundation, and she serves on the boards of directors of Johnson & Johnson and the Meredith Corporation. A biochemist, Coleman built a distinguished research career through her research on the immune system and malignancies.

Founded in 1989, the McBee Lecture is one of few in the U.S. focused solely on higher education. The annual event, sponsored by the Institute of Higher Education, honors Louise McBee, a former UGA vice president for academic affairs and a former state representative from Athens. During McBee’s 25-year tenure at UGA, she served in a number of positions, including dean of women, dean of students and acting vice president for academic affairs. Following her retirement in 1988, the Board of Regents of the University System of Georgia named her vice president emerita for academic affairs. McBee was elected to the Georgia House of Representatives in 1991 and served six terms before stepping down in 2004. In her last term, she was chair of the House Higher Education Committee. For more information on the McBee Lecture, see http://ihe.uga.edu/events/louise-mcbee-lectures.