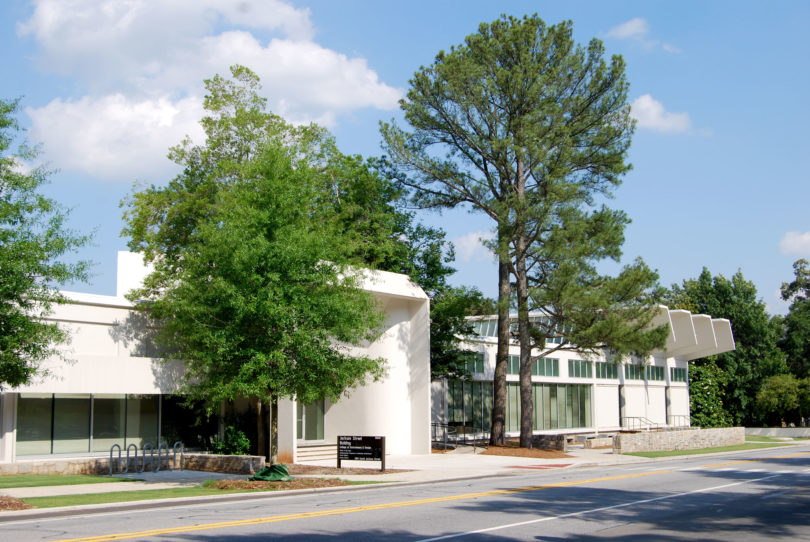 Athens, Ga. – The University of Georgia College of Environment and Design’s Jackson Street Building has received LEED Gold Certification. The building is the first historic building on campus to earn the designation.

LEED, or Leadership in Energy and Environmental Design, is an independent, third party verification that indicates a building project meets standards for sustainability set by the nonprofit U.S. Green Building Council. The LEED program is a points-based system that encourages lower operating costs, waste reduction, and energy and water conservation among other criteria.

The building was designed by Atlanta architect Joseph Amisano, who is also credited with the design of Lenox Square Mall and the Peachtree MARTA station, among many other projects. When it opened as the School of Art in 1962, it was called as “The Ice Plant” because of its stark white exterior when compared to other buildings on North Campus. It was also referred to as “Dodd’s Folly” because Lamar Dodd, art school dean at the time, approved the then unpopular building. Now over 50 years old, the building is an example of mid-century modern and one of only two modernist buildings at UGA (the other being the College of Pharmacy). The building was renovated in 2012 to become home for the College of Environment and Design. It is now one of the most energy and water efficient buildings on campus.

Solar panels installed on the southern facing skylight shields have made it the first building on campus with solar collectors. The panels were purchased through MAGE SOLAR USA, a Dublin-based complete system provider and producer of U.S.-assembled and American Recovery and Reinvestment Act-compliant solar photovoltaic-modules. Prior to renovation, the building lost significant heat in the winter and gained heat in the summer due a number of large glass windows. All of the windows have been replaced by energy-efficient glass that transfers less heat.

The building has energy-efficient heating and cooling systems that cool or heat by convection. The systems include an experimental chilled beam system that transports cold or hot water through small pipes near the ceiling. A 28,000-gallon cistern in the back of the building collects both rainwater and water that condenses in the cooling system and stores it for later re-use. The water is cleaned sufficiently to use for toilet flushing and to provide water back into the cooling system’s tower, reducing wastewater by 90 percent.

Additional factors that contributed to LEED designation include: a green cleaning program, recyclable collection, reuse and rehabilitation of an existing building, a stormwater collection and management system, public transportation access and community connectivity.