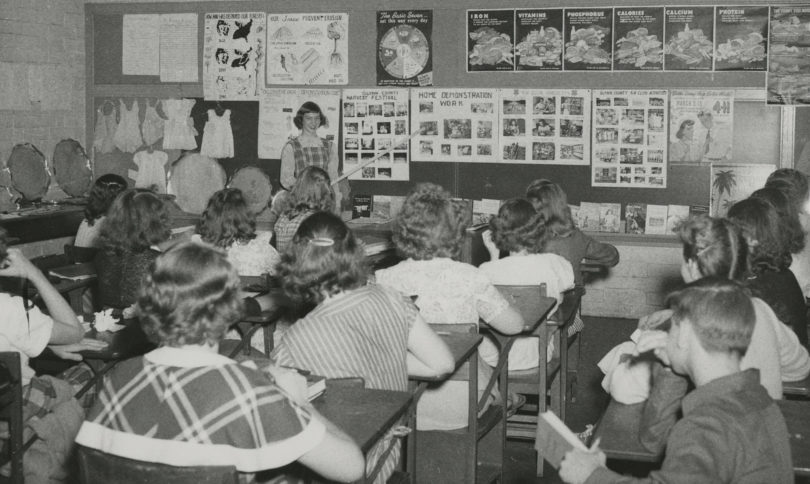 The College of Family and Consumer Sciences started as the Division of Home Economics and now offers a variety of majors, ranging from financial planning to fashion merchandising to nutritional sciences.

The first 12 female undergraduate students enrolled in the college in 1918.

Although women were unofficially students at the University of Georgia as early as 1903, they didn’t find a home here until after World War I.

With a nationwide food shortage raging, women were officially admitted to UGA as undergraduate students in 1918. They took their classes in the home economics and education departments.

A bachelor’s degree for women was approved within the Division of Home Economics, part of the UGA College of Agriculture, in February 1918, and the first 12 female students enrolled in the college that September. Mary Creswell was named director of the new division.

“Those women who went before us were driven to learn and understand more, to do more with their education and to contribute more to improving the lives of others,” FACS Dean Linda Kirk Fox said.

Championed by College of Agriculture President Andrew Soule, the Division of Home Economics eventually became the College of Family and Consumer Sciences.

The college now offers a variety of majors, ranging from financial planning to fashion merchandising to nutritional sciences.

These areas of study fall under four departments: foods and nutrition; textiles, merchandising and interiors; financial planning, housing and consumer economics; and human development and family science. The college also is home to the Institute on Human Development and Disability.

With an alumni base of nearly 20,000, the college is celebrating its centennial throughout 2018 with several events and opportunities for engagement.

One of the key features of the centennial celebration is the launch of a special website, fcs.uga.edu/about/centennial, that includes timelines, oral histories, photos and biographies of the “FACS 100 Centennial Honorees,” people who brought strength and commitment to the ideals of the profession. The bios of the honorees are at fcs.uga.edu/alumni/awards-casc-centennial-100. They were nominated and selected by a committee of faculty, staff, alumni and students.

The Centennial Honorees along with members of the Honor Hall of Recognition, the highest honor given by the college, attended the FACS 100 Gala: A Centennial Celebration.

“I am proud to join with others in recognizing these individuals who have embraced and influenced the ideals to which our college aspires, including student-centered education, research to improve the human condition, generosity and a spirit of public service,” Fox said. “All of the Centennial Honorees and the members of the Honor Hall of Recognition are to be applauded for their contributions to our success.” 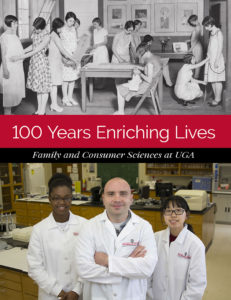 A book about the college’s history is being published by University of Georgia Press.

The honorees also are recognized in a 140-page pictorial history book, “100 Years Enriching Lives: Family and Consumer Sciences at UGA,” which is available through the University of Georgia Press.

The growth of family and consumer sciences at UGA also was the subject of a semester long exhibit at the Richard B. Russell Building Special Collections Libraries.

The exhibit, “Open Doors: 100 Years of Family and Consumer Sciences at UGA,” also focused on how the field has grown and adapted over the decades.

The exhibit included publications, manuscripts, period clothing from the college’s Historic Clothing and Textile Collection, along with photographs of the first women admitted to UGA, food preservation classes, needlework demonstrations, World War II military on the UGA campus and other moments from the past 100 years.