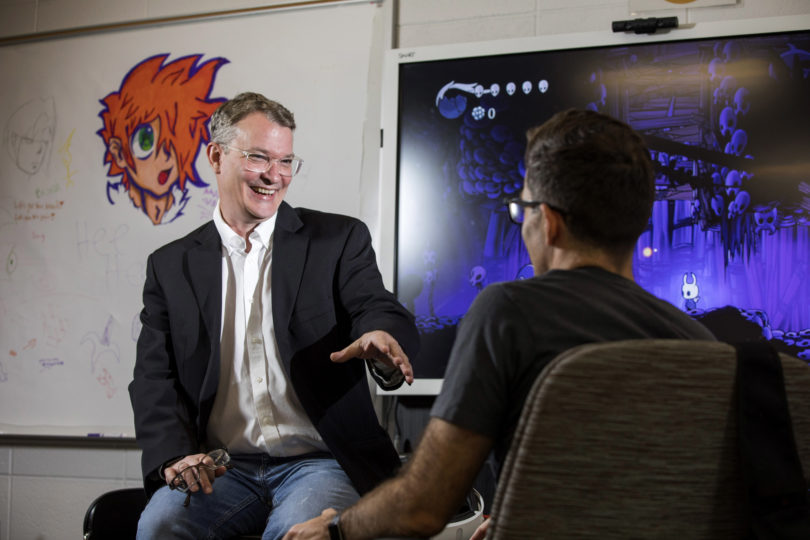 In his role as director of the College of Education’s Innovation in Teaching and Technology initiative, Nicholas Holt focuses on what’s next. (Photo by Dorothy Kozlowski) 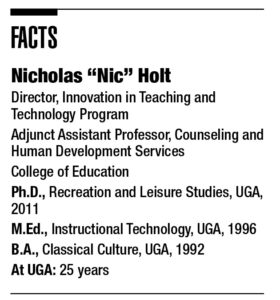 Nicholas Holt’s work as director of the Innovation in Teaching and Technology initiative in the College of Education includes all those roles and more, but it all boils down to one thing—what’s next?

“We live in a world that privileges specialization, but the world right now needs more generalists,” Holt said. “We need people who live at the intersections between domains and can understand the different languages that different professions and academic communities speak and to find more ways to bring them together.”

Holt grew up in Athens and has a deep appreciation for its culture. In fact, he’s worked with R.E.M. and helped start the Kudzu Film Festival, directing and producing it through 2001. But it was an interest in MIDI—Musical Instrument Digital Interface, which allows instruments to “talk” to computers—that he explored as an undergraduate that inspired a career in technology.

After what Holt called a “transformative” study abroad program in Tunisia, he graduated from UGA with his first degree—he’s a Triple Dawg—and took a temporary position with the Carl Vinson Institute of Government, a public service and outreach unit, doing geographic information systems work.

Once he completed his master’s degree, he started a company to help doctors, lawyers and schools convert paper records to digital formats.

Later, a friend mentioned that there was an innovation and teaching laboratory in the College of Education, the Learning Performance and Support Lab, that needed a manager. In that position, which he held for six years, Holt got to work with early virtual reality equipment.

Holt wanted to explore what people learn from their hobbies. For example, what does someone who is an avid gardener learn about botany and entomology simply by gardening regularly? This type of “collateral learning” became the subject of his dissertation exploring what individuals collaterally learned while playing video games.

Technology continues to be at the heart of his work at UGA. He’s been in his current position for seven years where he plans the annual Innovation in Teaching conference. He also leads two Innovation in Teaching and Technology academies each year. Held once per semester, participants cover a variety of topics during the 12 total hours that are meant to address their own pedagogical and technological needs and issues.

The original purpose of the academies was to help faculty keep up with technological changes, but Holt also sees these sessions as opportunities to break down departmental silos and help participants to work and collaborate across academic disciplines.

“I enjoy building these longer-term relationships,” Holt said. “I really thrive in that spirit of cooperation and collaboration.”

Holt continues to learn about “what’s next” by attending the Consumer Electronics Show and InfoComm and brings that information back to help faculty incorporate it in their own active learning practices.

“I strongly believe in the College of Education, the University of Georgia and the Athens community,” Holt said. “There is nowhere I would rather be.”