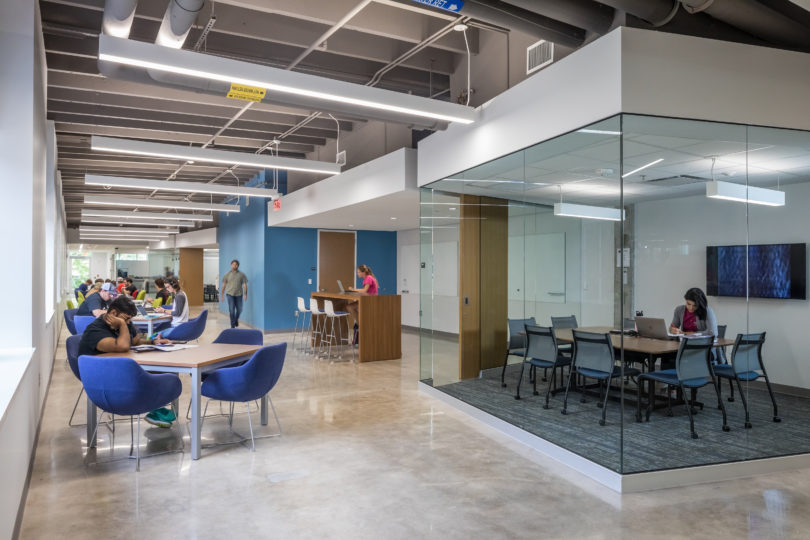 This photo shows the commons area in the renovated section of the building with spaces for studying and team projects. The renovation includes two “huddle rooms” (the glassed-in area to the right) where groups of students can meet and work together. (Photo by Jonathan Hillyer, courtesy Cooper Carry)

The University of Georgia College of Engineering celebrated the completion of a major renovation of the Driftmier Engineering Center with a ribbon-cutting ceremony on Sept. 13.

The project, completed in time for the beginning of fall semester classes, has transformed 21,000 square feet of 1960s-era classroom, laboratory and office space into state-of-the-art instructional labs and classrooms. The renovation also provides students with new study areas and spaces designed to promote project-based learning and teamwork.

“These new classrooms, laboratories and other enhancements truly reflect the energy of our college and its students,” said Donald Leo, dean of the College of Engineering. “The project demonstrates UGA’s commitment to engineering education and serves as a dynamic launch pad for the future of our growing college.”

The $5.5 million project was funded by the university and the college with support from private donors and industry partners. The renovation work includes a significant expansion of the college’s laboratory capabilities in support of its eight undergraduate and seven graduate degree programs. In addition, the project provides students with three new modern classrooms with a total of 2,700 square feet and more than 100 seats.

The renovation also has allowed the College of Engineering to reallocate existing space in the Driftmier Engineering Center to enhance the student experience. A new Student Success Center now houses the college’s experiential learning, academic advising, prospective student outreach and K-12 outreach programs. Previously, those functions had been split between Driftmier and the Paul D. Coverdell Center. The college has converted an existing computer lab into a new Professional Development Center, which will host employer recruitment events, career counseling sessions and career workshops.

The Governor and General Assembly have approved funding for a second round of renovations at Driftmier, scheduled to begin in January 2020. This phase of the work will include new classrooms and instructional spaces, including a modern auditorium. The project is scheduled to be completed in time for the beginning of fall semester 2020. 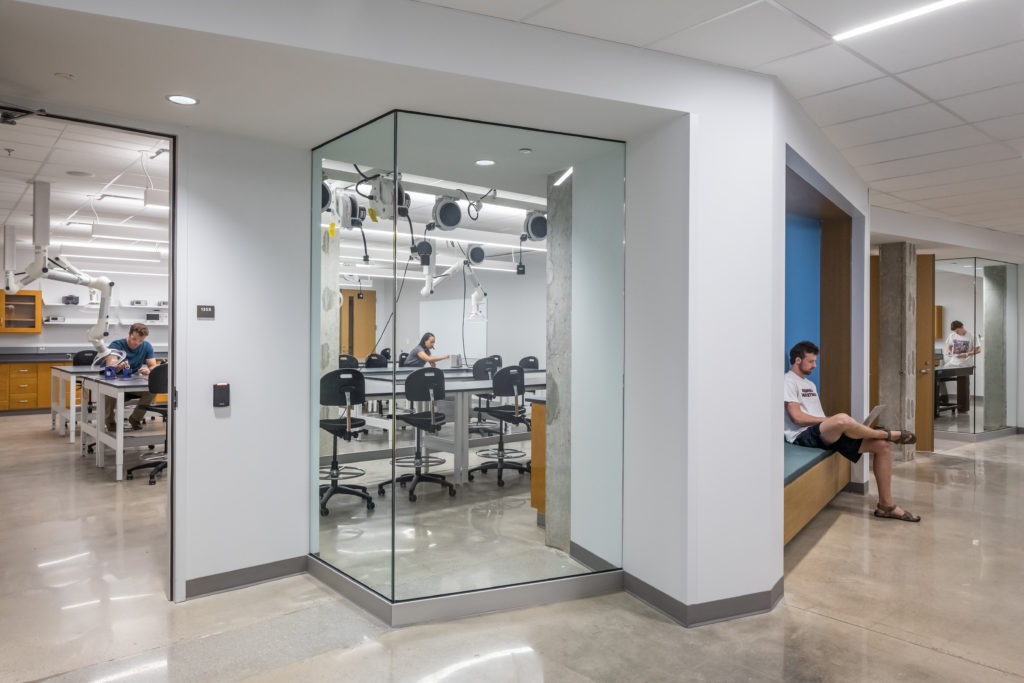 This photo shows the hallway outside the Process Automation Laboratory, where students can explore the use of sensors, motors, robots and other devices. (Photo by Jonathan Hillyer, courtesy Cooper Carry)

The college’s research enterprise is expanding along with enrollment, logging a 300% increase in external funding over the past five years.

A working engineer, Driftmier partnered with Roy Hitchcock, an architect, to design and oversee construction of more than 15 buildings at UGA, including many of the federally funded Public Works Administration buildings constructed in the late 1930s. Driftmier also was the supervising engineer for the University System of Georgia. Along with Hitchcock, he helped create 80 buildings at 16 schools in the system.

“This project will significantly enhance the student experience by providing more state-of-the art spaces for collaboration, design work and teamwork,” said Leo. “With the help of the university, our alumni, friends and industry partners, I believe we’ve positioned our college to better serve our students and our state well into the future.”