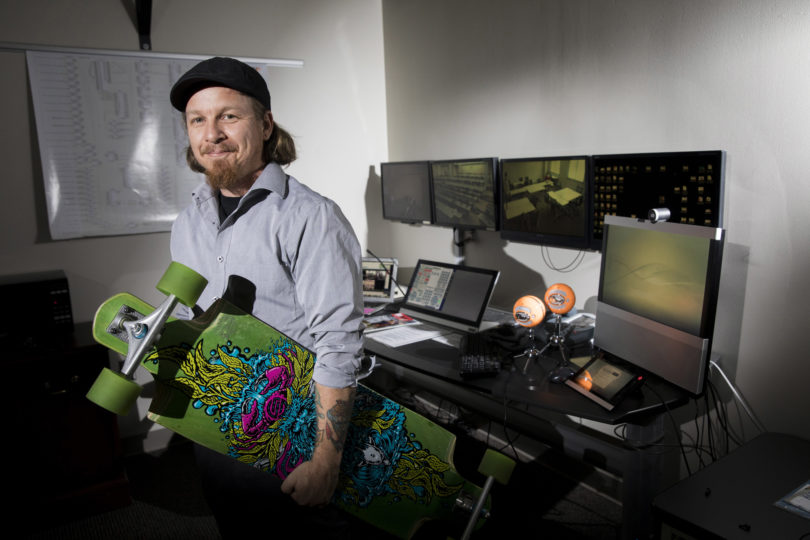 Chris Duran, who manages audiovisual equipment for the College of Pharmacy, has had an interest in technology since childhood. (Photo by Dorothy Kozlowski) 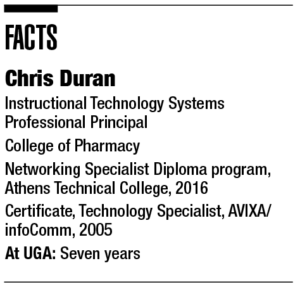 The College of Pharmacy extends across four campuses—Athens, Albany, Augusta and Savannah—and Duran connects them by managing audiovisual equipment across all the campuses. He repairs, replaces or builds new equipment, occasionally driving to other campuses to meet their technology needs.

“When [the technology] doesn’t work, that is where I kick it into high gear,” Duran said. “Every time that happens, I do everything in my power to make it work. Then I’ll come back after the fact to do a full repair and typically have it ready for the next class. It’s a lot of quick thinking and problem solving. It can be pretty crazy.”

For Duran to make these technology connections, he works in the control room in the College of Pharmacy. He calls the hub of the control room the “master brain” of everything in the South Campus building and has dubbed the technology in individual rooms as “miniature brains.” From the control room, he monitors classrooms on any of the campuses and can control the classroom’s equipment. When faculty members have an issue with the technology, he can use a microphone to talk them through the problem, or he can help them by controlling the technology from his laptop.

“You never know what campus is going to call you and tell you that a projector or a camera has some type of issue,” he said. “That’s what I like about the job. I’m not always just sitting there pushing buttons all day.”

Duran’s interest in technology and equipment started in his childhood.

“When I was really young, I played music. I didn’t come from a very wealthy family, so I had to fix my own equipment when it would break,” he said. “I would tinker with it all the time and learn how it worked and learn how to fix stuff. Then it became more of taking stuff apart to see how it worked. The older I got—after changing careers a couple times—I found a place where I could cater to my love of tinkering with things.”

Before coming to UGA, Duran worked for TSAV, a full-service technology consulting firm in Athens. At that job, he installed technology in classrooms, arenas and many other types of venues, and he was one of the managers for installing the equipment in the College of Pharmacy before he worked at UGA.

Duran helped develop the instructional technology systems in the newly renovated facilities at the Augusta and Savannah campuses. There, he is in charge of making sure that everything is compatible with the standards of the campus, particularly if it is a hospital campus, as security practices are different.

“A lot of times, you’re learning on the fly,” he said.

While his job can be frustrating if he can’t immediately solve a problem, he enjoys the challenge and loves helping people.

“I like that every day can potentially be different and that there is always a challenge to work through,” Duran said. “Even when you have your normal day-to-day activities, you’re typically always looking forward towards a new project, and as technology is always changing and developing, you’re always studying the next new thing and where you need to go.”