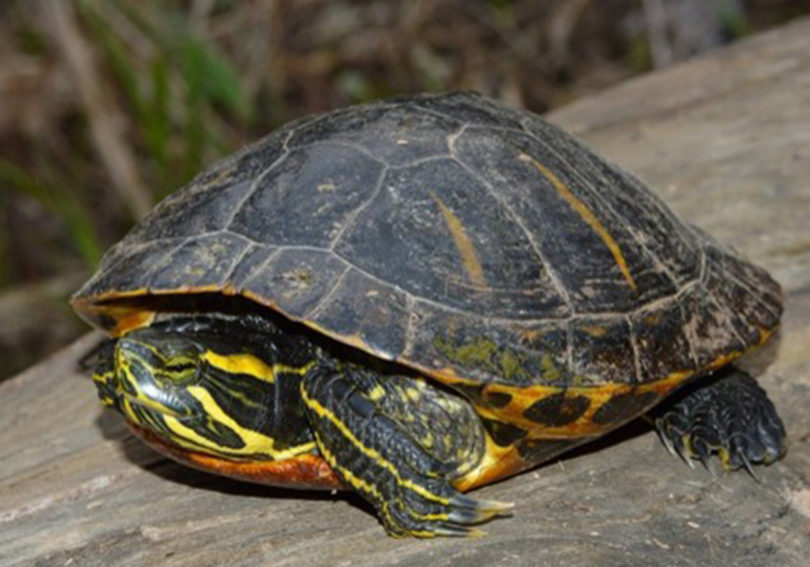 Aiken, S.C. – Coal combustion waste is well documented as an environmental pollutant. The United States produces over 130 million tons of coal combustion residues, or CCRs, every year, with 40 percent of these wastes placed in aquatic settling basins. These basins are attractive environments for wildlife, placing them at risk of exposure to potentially toxic levels of trace elements.

Now scientists at the University of Georgia have confirmed that exposure to CCRs lead to higher levels of trace elements in yellow-bellied sliders, a freshwater turtle native to the Southeastern U.S. In addition, the researchers found exposure to certain trace elements may have a beneficial effect on turtle immune system response. The study was published recently in the journal Environmental Pollution.

Haskins worked with Tracey Tuberville, an associate research scientist at SREL and Warnell, to obtain the samples from two groups of turtles captured at the U.S. Department of Energy’s Savannah River Site near Aiken, South Carolina.

“It is normal for trace elements to be present at low levels, as they aid an organism to function, but they can have negative effects on development, survival and reproduction when they exist at elevated levels,” he said.

“Due to their long life span, turtles have the potential to be exposed to and accumulate contaminants for decades,” Tuberville said. “We were very interested in studying the contaminated basin and wetland area in this study because there is a well-documented history of contamination. That meant the potential for long-term exposure exists.”

The results from the claw samples were similar. Arsenic, cadmium, copper and selenium ranged from 216 to 6,647 percent higher in the claws of contaminated-area turtles compared to claw samples taken from turtles in the uncontaminated area.

Contrary to the team’s expectations, two turtles from the uncontaminated area had significantly higher levels of chromium in their blood than any of the turtles. Haskins believes that because the element was only elevated in the blood, indicating recent exposure, these two turtles may have taken a short journey to the area surrounding the contaminated wetlands.

The team expected the contaminated-area turtles would have a weakened or compromised immune system that could not fight bacteria, but when they examined the immune system, they saw the unexpected.

“When we looked at the two groups, we discovered that turtles from the contaminated area had a stronger immune system to fight off bacteria,” Haskins said. “We then speculated that exposure to certain trace elements may have a beneficial effect on turtle immune system response.”

Haskins and Tuberville called for further exploration of the potential effects of CCR-associated contaminants on turtle immune function, including investigation of influencing factors such as age, stress, temperature, season and gender.

“It may be that some health effects of contaminants only become apparent or problematic when other stressors, such as disease outbreak or drought, are present,” Tuberville said. “Our first goal was to get a baseline of their health.”

The study results indicate there was no significant difference in the presence of parasites between the two groups, so long-term CCRs exposure did not make the turtles more vulnerable to parasites.

Haskins said that although most freshwater turtles are imperiled, the eye-catching yellow-bellied slider is common.

“These turtles are abundant in the region and present in almost every aquatic habitat on the SRS,” he said. “Conducting research on the yellow-bellied slider allowed us to obtain the needed data without impairing species that are already at risk.”