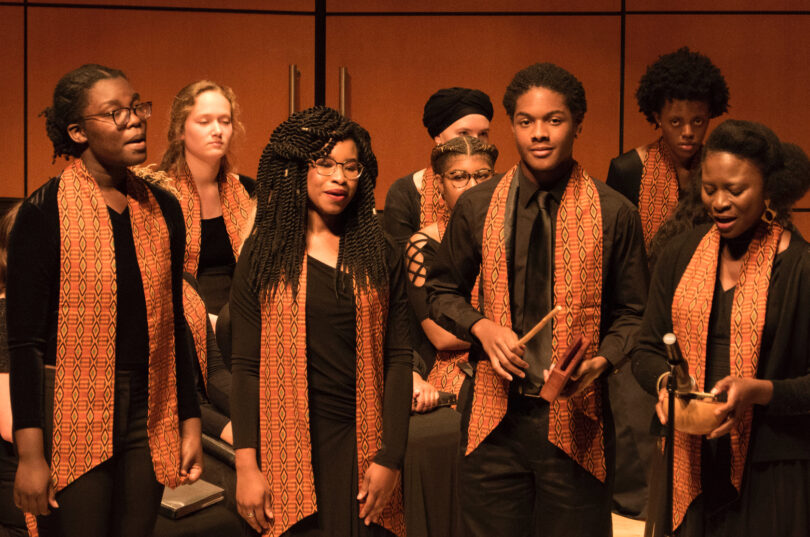 The African American Choral Ensemble, above, and the UGA Wind Ensemble will share the stage for a combined concert on Nov. 19 at 7:30 p.m. in Hodgson Concert Hall. (Submitted photo)

Join the African American Choral Ensemble and the UGA Wind Ensemble as they share the stage in a combined concert on Nov. 19 at 7:30 p.m. in Hodgson Concert Hall.

“The composers leave us their thoughts and ideas in black on white and only request that we communicate their intended messages in high-definition technicolor passion,” said Gregory Broughton, director of AACE

From its rich beginnings in the early 1970s as the Pamoja Singers, the AACE has endeavored to keep concert halls and churches filled with the powerful sounds and wealth of indigenous musical treasures birthed from the African American experience.

Led by associate professor Jaclyn Hartenberger, the Wind Ensemble has earned an international reputation for its artistry, precision, sensitivity and musicianship. Membership, determined each semester by blind audition, includes the most accomplished graduate and undergraduate UGA music majors. Employing flexible scoring, the Wind Ensemble (one musician per part) performs chamber works as well as large-scale compositions, fresh ink and classics, and music from around the world.

Tickets are $12 for adults and $3 for students. Live streaming is available at www.music.uga.edu/live-streaming for those unable to attend.