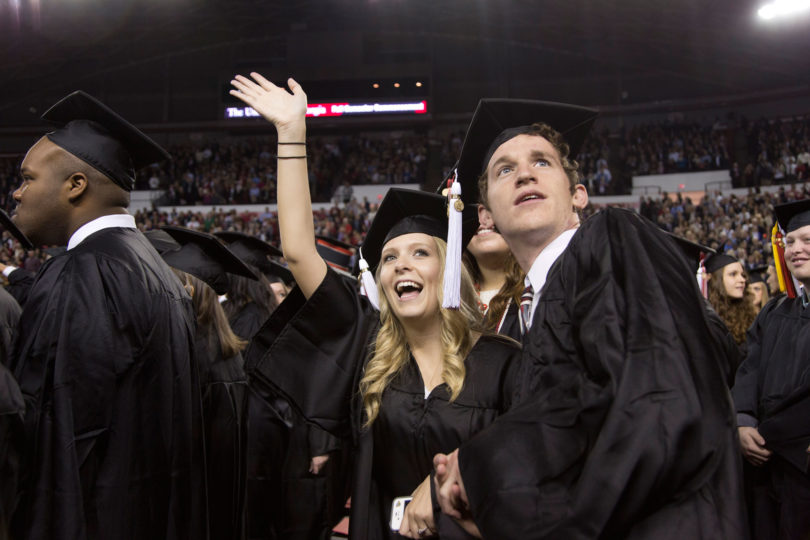 Anna Alexander (left) of Fayetteville and Ryan Prior of Warner Robins wave to family members during the Commencement processional.

Countless hours of reading, writing and even some complex arithmetic paid off for scores of UGA students on Dec. 14 as they attended Commencement ceremonies at Stegeman Coliseum for the conferring of their degrees.

About 2,265 students were eligible to receive their diplomas for the fall Commencement -ceremonies.

Nearly 1,800 of those degrees were for undergraduates. Many of those students and their families filled Stegeman Coliseum for the morning Commencement ceremony, featuring an address by philanthropist and Atlanta Falcons owner Arthur M. Blank.

During the ceremony, UGA President Michael F. Adams spoke about the academic chops of this crop of graduates.

“I truly believe that we are producing people here who can compete with young people from any place in the world,” he said. “Because of that, the future of this state, this region and this nation is very bright.”

Blank, the co-founder of Home Depot and chairman of the nonprofit Arthur M. Blank Family Foundation, offered his own hard-fought business experience as advice to the graduates. He challenged them to “be bold, adapt to change, cultivate your -relationships, treat everybody with dignity and respect and give back to your community.”

He noted that technology was rapidly changing the job market, leaving uncertainty about what kind of jobs would be the leading careers of tomorrow, but he reassured students in their ability to succeed.

In addition to the degrees conferred on UGA graduates at the ceremony, Adams also bestowed on Blank an honorary doctorate of laws, making him the 78th -individual to receive such a distinction in the institution’s 227-year history.

In conferring the honorary degree, Adams called Blank “one of this state’s most influential and devoted philanthropists.”

“Honorary doctorates allow universities to recognize individuals for extraordinary service and superior achievement,” he said. “They are reserved for individuals whose accomplishments and contributions have in a fundamental and lasting way helped improve society and the state of mankind.”

The Blank Family Foundation has donated more than $250 million to community programs since its establishment in 1995.

One student also was singled out during the ceremony for her academic achievements. Kelly Ann King, who graduated with a bachelor’s degree in biological sciences, was recognized as a First Honor Graduate for completing her degree requirements with a perfect 4.0 GPA.

Graduating students received another rousing address from one of their classmates. Tunji Adebayo, a dietetics graduate from the College of Family and Consumer Sciences, was the student speaker from the undergraduate class. He offered bold words of encouragement to his peers.

“Attack life with the same ferocity that you attacked (earning) your college degree,” he said. “UGA has been a journey to lead us to a door of opportunities-whether that means being the CEO of a Fortune 500 company or starting your own nonprofit-do not be afraid to knock on that door and, if necessary, knock it down. Because we are Dawgs and have come way too far to take ‘no’ for an answer.”

Keeping true to tradition, many undergraduate students decorated or bedazzled the tops of their graduation caps with a Georgia “G,” the sign of the Arch and more.

Matthew Walter, who was receiving his degree from the Warnell School of Forestry and Natural Resources, fastened the skull of a coyote to his cap. The morbid attachment, he explained, was inspired by a class project.

A separate afternoon ceremony at Stegeman Coliseum was held for students earning their master’s and doctoral degrees.

Fran Teague, a Meigs Distinguished Teaching Professor and University Professor of the Arts for English and theatre and film studies, delivered the graduate Commencement address. In it, she argued that the true value of graduate education is learning how to teach one’s self as well as others.

Teague referred to a “paradox” in graduate education in which students acquire a large “body of esoteric knowledge” that in reality has “a short shelf life.”

In other words, Teague said, the knowledge and theories that students learn in master’s and doctoral programs eventually will become outdated as new theories and ideas surface. But, she said, graduate programs not only prepare students to learn new material, they also prepare them to discover new ideas.

“You will generate the knowledge that the next generation of students will be learning,” she told the degree recipients. “You will rewrite the books that are new now.”

President Adams told the same group of students, “When you leave us at this level, you truly take the academic reputation of this place with you. We salute you for what you have accomplished up to this point.”