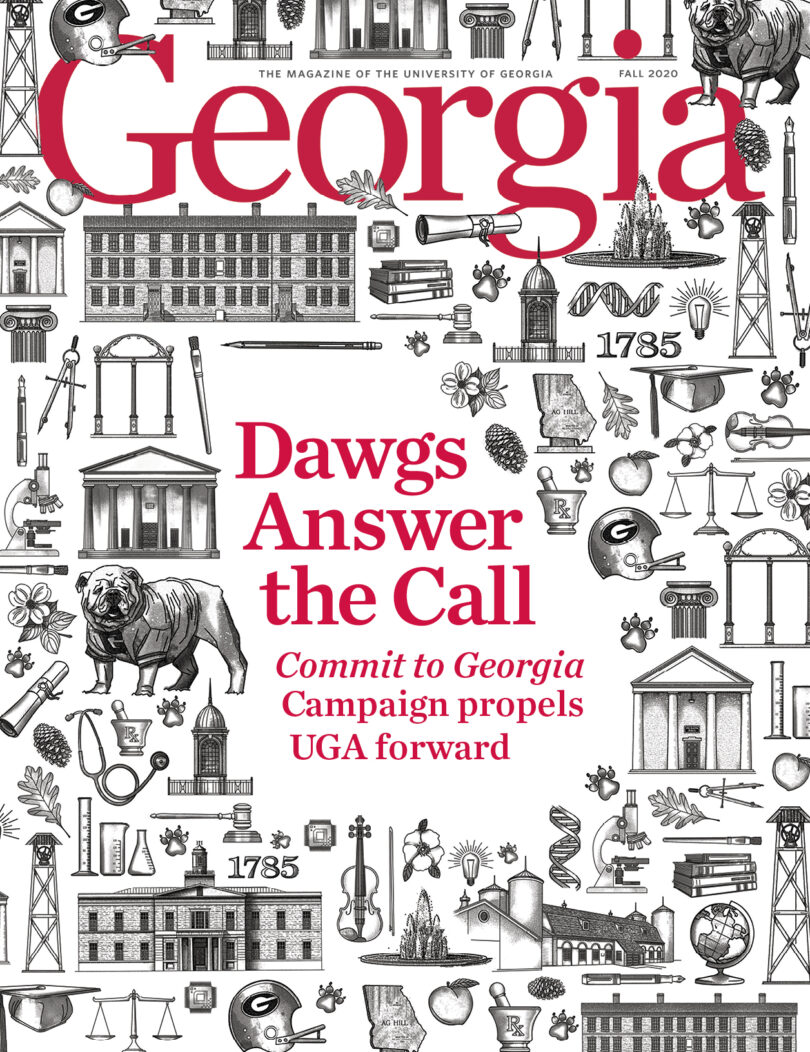 The University of Georgia surpassed its $1.2 billion goal for the Commit to Georgia Campaign 16 months early, and we never would have achieved it without supporters like you. (Illustration by Seth McWhorter, art direction by Jackie Baxter Roberts/UGA)

When the Commit to Georgia Campaign launched, the University of Georgia called on Bulldogs everywhere to help UGA remove barriers to higher education, enhance our learning environment, and solve the grand challenges of our state and world.

UGA leadership set an ambitious goal—$1.2 billion by 2020—and the result was something amazing: Donors gave $1.45 billion, a record-breaking amount for the university.

Then everything changed. The COVID-19 pandemic shook the world, infecting millions and ripping safety and normalcy from the daily lives of millions more. In the midst of the pandemic, sustained protests across the country cast a harsh spotlight on racial injustice in America. In the face of an uncertain future, with the unknown around every corner, the question naturally arose: Why does a fundraising campaign matter? Because it’s a foundation to build solutions to problems as big as the ones we’re facing.

The campaign supports a promise to every student and community the university serves. Most of all, it’s proof that when Bulldogs come together, success is more than assured—it’s historic.

Why does a fundraising campaign matter? Because it’s a foundation to build solutions to problems as big as the ones we’re facing.

“We have faced enormous challenges this year, but the University of Georgia is well positioned to withstand difficult moments like these due to the strong support of the state of Georgia and the generosity of our alumni and friends,” says President Jere W. Morehead JD ’80. “The Commit to Georgia Campaign was a great success, as it simultaneously brought this institution much closer to where we want to be and helped make us the institution that the world needs us to be.”

“When you look at a campaign, there are a lot of big numbers, and while we’re proud of those, I tend to think the most important number is one: one professor making a research breakthrough, one scholarship making a dream come true, one donor making the choice to give,” says Kelly Kerner, vice president for development and alumni relations. “Those individual stories are where you can most clearly see the impact of this campaign.

“Every person who gave has their own important story that inspired them to give, and their giving created an important story in someone else’s life—an effect that touches that recipient’s family and community, future recipients, and the university as a whole.”

One decision to make one gift, repeated 613,495 times, led to a period of significant growth across a multitude of areas: over $80 million committed to need-based aid, more than 900,000 square feet of new learning and activity space, and 94 new endowed faculty positions, to name a few. But, for students like MiMi Tran, it’s less about numbers and more about the life that gifts allow them.

“Donors are so selfless to help people they don’t know fulfill their education,” says Tran, a Georgia Commitment Scholarship recipient from Atlanta majoring in exercise and sport science. “That really changes lives, and I’m forever thankful for it.”

For many students like Tran, receiving such a transformative gift drives them to give as well. In this way, campaign donors’ impact is generational—not just through the gifts they make but also the people they help.

A scholarship sent Natalie Morean BSFCS ’19 on a four-week service-learning trip to Ghana where she shadowed local health care workers. That experience inspired her to pursue a master’s degree in nonprofit management and leadership from UGA’s School of Social Work.

“When you donate, it creates a cycle. Many donors were students at some point,” says Morean, who now gives to the university herself. “And while they were here, they had access to opportunities because of donations from those who came before them. I want to invest in the future. That’s very important to me.”

In a world where UGA is called to remove more barriers, build new learning environments, and solve increasingly complex challenges, that cycle is reassuring. The University of Georgia reached new heights during the Commit to Georgia Campaign because the UGA community rallied like never before. Now, as the university faces unprecedented challenges, the unwavering support of its committed network of alumni and friends will continue to help sustain it and enable UGA to persevere.