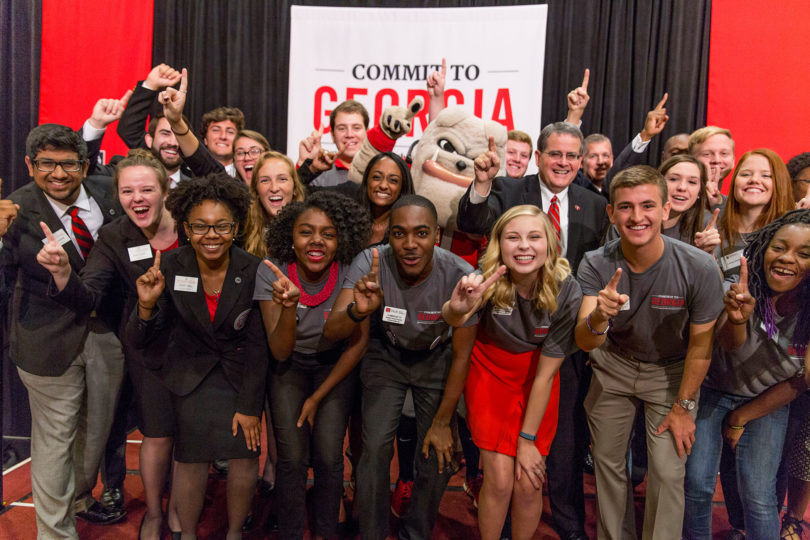 Commit to Georgia Campaign off to strong start

In the year the public phase of the Commit to Georgia Campaign was announced, the University of Georgia is on course to set yet another new record in annual fundraising, breaking last year’s historic total of $183.8 million by a significant margin. This achievement would mark the fourth consecutive year that a new record has been established.

“Our alumni and friends have rallied behind this ambitious campaign to support the university at unprecedented levels,” said President Jere W. Morehead. “While much hard work remains in the final three months of the fiscal year and in the years ahead, I am pleased with the surging momentum driving the campaign forward. Typically, the year the public phase is announced is the peak year, and we are excited to be on track in that regard.”

Morehead noted that the campaign already is making a positive difference in the lives of UGA students, especially through additional scholarship support. Donors have responded enthusiastically to the new Georgia Commitment Scholarship Program, through which the UGA Foundation will match any gift to the university in the amount of $50,000, $75,000 or $100,000 to endow a need-based scholarship.

Nearly 70 new need-based scholarships already have been established since the program was unveiled during the annual State of the University Address just over two months ago, and more than 40 of these scholarships already have been awarded for the fall 2017 semester to admitted students with unmet financial need. For the recipients, a scholarship may remove significant financial barriers and make it possible to choose UGA over another institution.

“The scholarship I have received over the past two years has made me realize that all of my hard work was not for nothing,” said Hauser. “It really made me feel that somebody believed in me and knew that I had the potential to do great things.”

The Commit to Georgia Campaign also is helping students to participate in high-impact learning experiences that align with their academic goals and career aspirations. Alumni and friends have established an endowed scholarship fund to support the university’s new experiential learning initiative, which took effect for the incoming class of fall 2016. This endowment recently distributed inaugural awards to nearly 80 students, who now can pursue world-class experiential learning opportunities such as interning on Capitol Hill, studying finance in New York City or conducting infectious disease research abroad.

The Commit to Georgia Campaign also is helping to fuel the university’s growing research enterprise, which has seen expenditures climb by 21 percent over the last two years. Since the start of this fiscal year, UGA donors have committed funds to establish nine new endowed faculty positions. The total number of endowed faculty positions on campus is now 275, which represents an increase of 34 percent since the start of the campaign. These endowed positions, such as the one held by Jose F. Cordero, the Gordhan L. and Virginia B. “Jinx” Patel Distinguished Professor in Public Health, provide critical financial resources to help faculty leverage their expertise and research activities against the grand challenges facing the state, nation and world.

“The endowment provided by the Patel Distinguished Professorship in Public Health will be instrumental in expanding research and service opportunities in maternal and child health and will lead to healthier babies and mothers in Georgia and throughout the world,” said Cordero.

On the road to achieving the $1.2 billion goal by 2020, the Commit to Georgia Campaign will continue to create more opportunities for students, faculty, and staff and will expand the university’s overall impact.

“Our donors are passionate and have responded well to the opportunity to make a difference,” said Kelly Kerner, vice president for development and alumni relations. “The objective of this campaign is helping to fuel the future of this university, so we cannot slow down.”

Play a role in UGA’s success-make your annual gift and/or monthly salary contribution today at give.uga.edu.