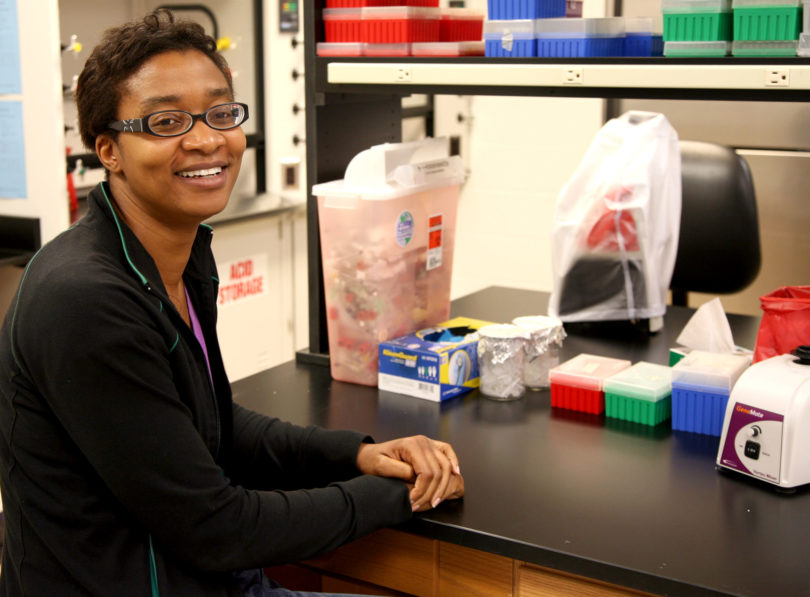 Athens, Ga. – New research is revealing surprising connections between animal microbiomes—the communities of microbes that live inside animals’ bodies—and animal behavior, according to a paper by University of Georgia ecologist Vanessa O. Ezenwa and her colleagues. The article, just published in the Perspectives section of the journal Science, reviews recent developments in this emerging research area and offers questions for future investigation.

The paper grew out of a National Science Foundation-sponsored workshop on new ways to approach the study of animal behavior. Ezenwa, an associate professor in the UGA Odum School of Ecology and College of Veterinary Medicine department of infectious diseases, and her coauthors were interested in the relationship between animal behavior and beneficial microbes.

Most research on the interactions between microbes and their animal hosts has focused on pathogens, Ezenwa said. Less is known about beneficial microbes or animal microbiomes, but several recent studies have begun to explore these connections.

“We know that animal behavior plays a critical role in establishing microbiomes,” she said. “Once they’re established, the microbiomes then influence animal behavior in lots of ways that have far-reaching consequences. That’s what we were trying to highlight in this article.”

Bumble bees, for example, obtain the microbes they need through social contact with nest mates, including consuming their nest mates’ feces-a not uncommon method for animals to acquire microbes. Green iguanas establish their intestinal microbiomes by feeding first on soil and later on the feces of adult iguanas.

“There are a lot of behaviors that animals might have that allow them to get the different microbes they need at different points of their lives,” Ezenwa said.

Microbes, in their turn, influence a wide range of animal behaviors, including feeding, mating and predator-prey interactions.

One recent study found that fruit flies prefer to mate with others that have microbiomes most similar to their own. Another found that African malaria mosquitoes were less attracted to humans who had a greater diversity of microbes on their skin, possibly because certain microbes produce chemicals that repel these mosquitoes.

Other studies have focused on understanding the mechanisms by which microbes influence behavior.

“Recent experiments have been able to assess the molecules that are involved in communication between microbes in the gut and the brain of mice, showing that microbes are associated with shifts in things like depression and anxiety in these mice,” she said. “There are huge implications in the role these microbes play in regulating neural function.”

Ezenwa’s own work involves investigating how social behavior and interactions between organisms might increase their likelihood of acquiring parasites and pathogens. She is starting a new project examining animal behavior and microbiomes in relation to infectious disease.

“As in the example of the bumble bees, behavior might control the microbes an animal acquires, and those microbes might then influence the animal’s vulnerability to pathogens,” she said.

The authors conclude that it will take a combination of molecular and experimental approaches to answer questions about the complex interactions between microbiomes and animal behaviors.

“This is a new, emerging topic that’s worthy of much more investigation,” Ezenwa said.

The article’s coauthors are Nicole M. Gerardo of Emory University; David W. Inouye of the Rocky Mountain Biological Laboratory and the University of Maryland; Monica Medina of the University of California, Merced; and Joao B. Xavier of the Memorial Sloan-Kettering Cancer Center. The full article is available at http://www.sciencemag.org/content/338/6104/198.full?sid=45ad6fa3-c906-4289-9bdb-4da1815ab59a.