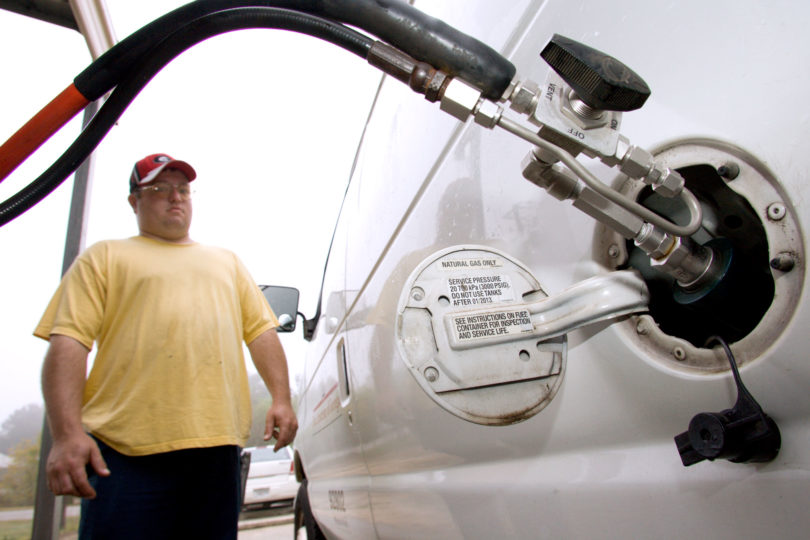 Fuel prices have dipped from their record highs of earlier this year, but you don’t need a crystal ball to know that they’re likely to rise in the future.

And so next time you’re filling up at the pump and watching the numbers roll ever-higher, consider what your costs would be like if you had 1,600 vans, cars and trucks to fuel, plus 47 buses with 140-gallon tanks.

At the University of Georgia, Ralph Johnson, associate vice president for physical plant, and Ron Hamlin, campus transit system manager, are looking for ways to keep the university’s transportation fuel bills low to free up money for other uses on campus. Increasingly, they’re looking to alternative fuel sources such as ethanol and biodiesel.

Johnson points out that alternative fuel use isn’t new at UGA. A decade ago, the university used clean-burning compressed natural gas in some of its vehicles. Six CNG vehicles are still in operation, donated to the university by BellSouth.

Johnson said the impetus for using CNG was a desire for reduced air emissions. Now, the university has another good reason to look at alternatives to gasoline and diesel.

“The cost of fuel has escalated so much that the financial side has become a greater driver in looking at alternative fuels,” Johnson said. “Of course, we also want to do the environmentally correct thing as well; we don’t want to take a step backward.”

To accomplish both goals, the university will run more of its vehicles on E85, a blend of 85 percent ethanol and 15 percent gasoline. Because ethanol is derived from crops-usually corn but also sugarcane and sugar beets-it is a renewable fuel source. It’s also cleaner burning than gasoline.

The Georgia Environmental Facilities Authority, a state agency that promotes energy efficiency and renewable energy, is scheduled to install a 1,000-gallon E85 tank at the university’s Vehicle Transportation and Maintenance Facility early next year.

Older vehicles can’t run on ethanol because the alcohol can damage the seals and o-rings of engines. But newer cars designed as flexible fuel vehicles can run on either E85 or gasoline.

The university already has a dozen flexible fuel vehicles in its fleet, and Johnson said physical plant plans to purchase more as older vehicles are replaced.

Campus buses are ahead of a 2007 federal requirement that mandates a switch to less-polluting ultra-low sulfur diesel. In coming years, they might run on renewable fuels. In spring of 2006, the university ran a bus on a blend of 5 percent biodiesel and 95 percent diesel in a pilot program. Biodiesel is manufactured from vegetable oils, animal fats or recycled restaurant greases. Hamlin said the pilot program was a success.

“The driver of that bus was very happy with the way it performed, and she noticed there was a distinct reduction in the black smoke that came out of the stack,” Hamlin said. “We’d love to be able to do it again.”

Hamlin said the main roadblock to the wider use of biodiesel is that there’s currently not a state contract for biodiesel purchasing. He explained that the university has a state-imposed purchasing cap of $100,000 for local contracting, which-at the current price of fuel-is about a two-month supply.

“The current contract expires in November,” Hamlin said. “And we’re hoping that when the new contract comes out there’ll be an option for biodiesel.”