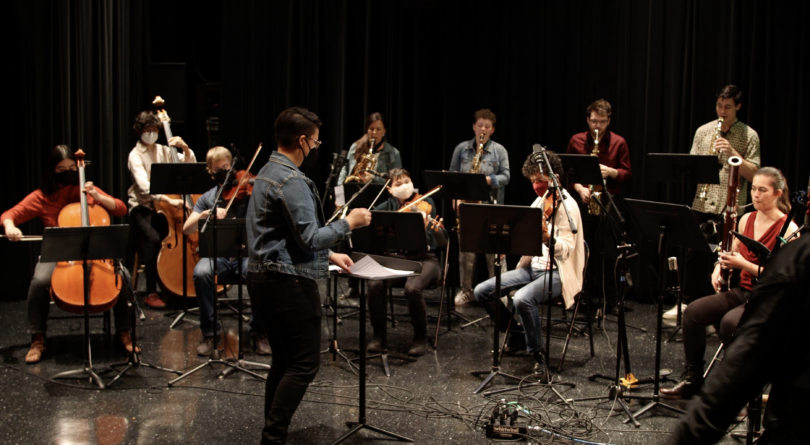 The University of Georgia Contemporary Chamber Ensemble will perform “Stay On It” Feb. 22 at 7:30 p.m. at Ramsey Hall in the UGA Performing Arts Center. (Submitted Photo)

The University of Georgia Contemporary Chamber Ensemble presents a free concert titled “Stay On It” Feb. 22 at 7:30 p.m. at Ramsey Hall in the UGA Performing Arts Center.

Performing the music of today, tomorrow and the recent past, CCE is co-directed by Brandon Quarles and Connie Frigo, professors at the Hugh Hodgson School of Music.

Curated and conducted by Quarles, “Stay On It” will feature the works of Luis Fernando Amaya, Julius Eastman and Michael Gordon.

“For my first concert as one of the co-directors of CCE, I wanted to share music that has meant a lot to me with our community here in Athens,” Quarles said. “Michael Gordon’s Low Quartet kicks off the concert with a bang with four bass instruments pounding out an intense groove. Gordon, along with David Lang and Julia Wolfe, founded the composer collective Bang On A Can, which was a huge influence on my own style and is one of the most influential groups in contemporary music.

“Luis Fernando Amaya is a close friend of mine, and I’m very excited to share his haunting ‘Tinta Roja, Tinta Negra (Red Ink, Black Ink)’ with our audience. For this piece, Amaya uses a Mexican string instrument called a jarana as a resonating chamber for a prerecorded electronics part. CCE will be playing along with this singing jarana, creating a texture where it is almost impossible to tell the different instruments apart. I am grateful to Pablo Duncan and everyone at the UGA Latin American and Caribbean Studies Institute for helping us obtain this jarana,” Quarles said.

“I learned about Julius Eastman and his piece titled ‘Stay On It’ through my mentors Eighth Blackbird, a Chicago-based contemporary chamber ensemble. This piece allows our musicians to improvise and create a version of the work that is unique to our ensemble,” Quarles added. “I am very proud of the students for diving into these pieces, learning styles and techniques that many of them had never explored before. Improvising was new to many in the ensemble, and now they are fearlessly making their own sounds.”

Over the past 30 years, Gordon has produced a strikingly diverse body of work, ranging from large-scale pieces for high-energy ensembles to major orchestral commissions to works conceived specifically for the recording studio. Transcending categorization, this music represents the collision of mysterious introspection and brutal directness. The Low Quartet opens the concert with a burst of energy. Scored for any four low instruments, CCE’s version features two baritone saxophones, a bassoon and a cello. The instruments imitate and chase each other throughout the piece, weaving an infectious groove along the way.

Born in Aguascalientes, Mexico, Amaya is a composer and percussionist currently based in Barcelona. Topics such as collective memory and the relationship between humans and non-humans (plants and animals, imaginary or not) are commonly present in his work. In “Tinta Roja, Tinta Negra (Red Ink, Black Ink),” Amaya employs a jarana as a resonator for electronic playback. The piece takes its inspiration from ancient Mexica (an indigenous people of Mexico) texts, grappling with the fact that those ancient voices have been silenced and lost to perpetuity.

Until recently, Eastman’s music was rarely performed. Born in 1940, Eastman was active in New York’s “downtown” music scene during the 1970s and early 1980s. After being evicted from his apartment in the early ‘80s, almost all of his scores were lost, and he tragically died in 1990 after years of homelessness. Through recordings and the work of researchers such as Mary Jane Leach, Eastman’s music has seen a renaissance over the last several years. A proudly Black and gay composer, Eastman’s music often challenged the norms of classical music and of society. In “Stay On It,” Eastman sets up a repeating vamp that slowly morphs over time as the players improvise around the groove. A violent deconstruction of the theme gives way to a solemn, hymn-like coda.

“I chose to close the concert with ‘Stay On It’ because it speaks to me of the variety of human experience—joy, madness, suffering, gratitude and many more emotions bubble out of this piece,” Quarles said.