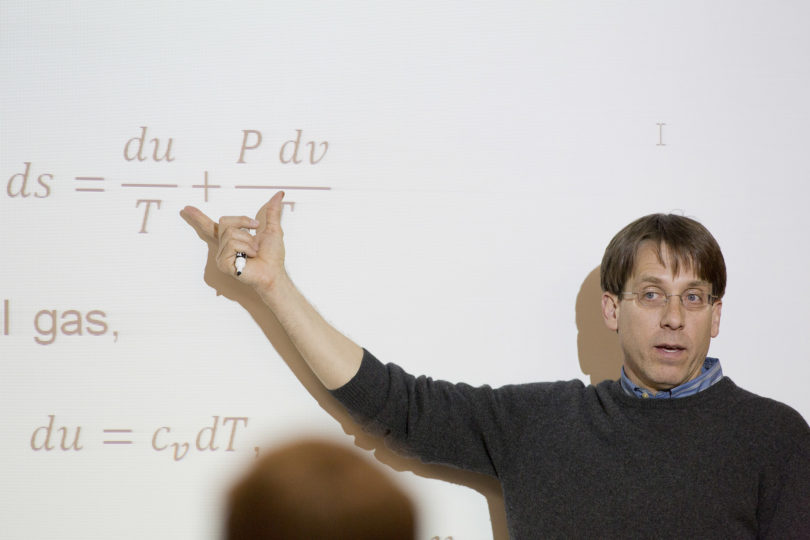 Athens, Ga. – Unless humans slow the destruction of Earth’s declining supply of plant life, civilization like it is now may become completely unsustainable, according to a paper published recently by University of Georgia researchers in the Proceedings of the National Academy of Sciences.

“You can think of the Earth like a battery that has been charged very slowly over billions of years,” said the study’s lead author, John Schramski, an associate professor in UGA’s College of Engineering. “The sun’s energy is stored in plants and fossil fuels, but humans are draining energy much faster than it can be replenished.”

Earth was once a barren landscape devoid of life, he explained, and it was only after billions of years that simple organisms evolved the ability to transform the sun’s light into energy. This eventually led to an explosion of plant and animal life that bathed the planet with lush forests and extraordinarily diverse ecosystems.

The study’s calculations are grounded in the fundamental principles of thermodynamics, a branch of physics concerned with the relationship between heat and mechanical energy. Chemical energy is stored in plants, or biomass, which is used for food and fuel, but which is also destroyed to make room for agriculture and expanding cities.

Scientists estimate that the Earth contained approximately 1,000 billion tons of carbon in living biomass 2,000 years ago. Since that time, humans have reduced that amount by almost half. It is estimated that just over 10 percent of that biomass was destroyed in just the last century.

“If we don’t reverse this trend, we’ll eventually reach a point where the biomass battery discharges to a level at which Earth can no longer sustain us,” Schramski said.

Working with James H. Brown from the University of New Mexico, Schramski and UGA’s David Gattie, an associate professor in the College of Engineering, show that the vast majority of losses come from deforestation, hastened by the advent of large-scale mechanized farming and the need to feed a rapidly growing population. As more biomass is destroyed, the planet has less stored energy, which it needs to maintain Earth’s complex food webs and biogeochemical balances.

“As the planet becomes less hospitable and more people depend on fewer available energy options, their standard of living and very survival will become increasingly vulnerable to fluctuations, such as droughts, disease epidemics and social unrest,” Schramski said.

If human beings do not go extinct, and biomass drops below sustainable thresholds, the population will decline drastically, and people will be forced to return to life as hunter-gatherers or simple horticulturalists, according to the paper.

“I’m not an ardent environmentalist; my training and my scientific work are rooted in thermodynamics,” Schramski said. “These laws are absolute and incontrovertible; we have a limited amount of biomass energy available on the planet, and once it’s exhausted, there is absolutely nothing to replace it.”

Schramski and his collaborators are hopeful that recognition of the importance of biomass, elimination of its destruction and increased reliance on renewable energy will slow the steady march toward an uncertain future, but the measures required to stop that progression may have to be drastic.

“I call myself a realistic optimist,” Schramski said. “I’ve gone through these numbers countless times looking for some kind of mitigating factor that suggests we’re wrong, but I haven’t found it.”

The study, on “Human Domination of the Biosphere: Rapid Discharge of the Earth-Space Battery Foretells the Future of Humankind,” will be available online at www.pnas.org/content/early/recent the week of July 13.