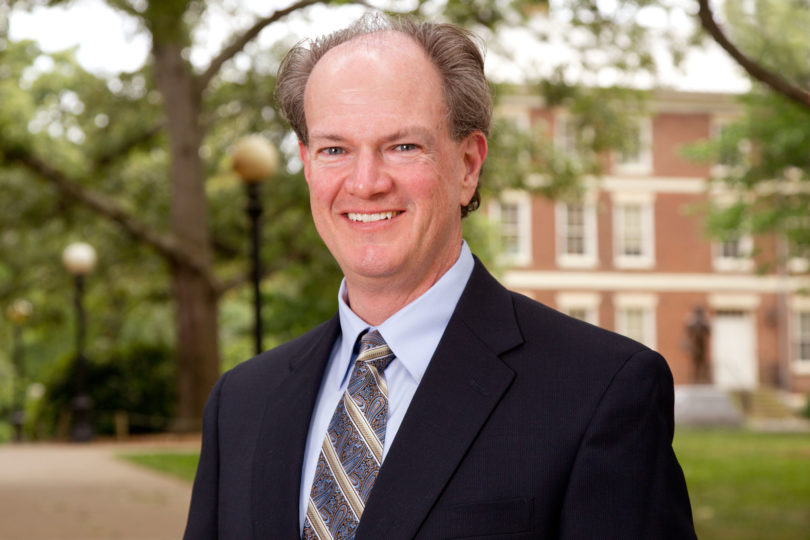 Alan Dorsey takes the helm of the university’s oldest, largest and most academically diverse college

When Alan T. Dorsey became dean of the Franklin College of Arts and Sciences on July 1, he took the helm of a college that educates more students and has more faculty and staff than all but six units of the 31-member University System of Georgia.

Needless to say, he’s been busy.

“Being a dean is the world’s best continuing education,” Dorsey said, reflecting on the diversity of disciplines within the college. Much of his time so far has been spent learning about the college’s 30 departments, its centers and institutes and getting to know its faculty, staff, students, alumni and supporters.

Dorsey comes to UGA with nearly 25 years of experience in higher education, most recently as associate dean for natural sciences and mathematics at the University of Florida’s College of Liberal Arts and Sciences.

“I’ve spent all of my career in higher education, and I believe in the education that we provide to our students and in the importance of faculty scholarship and research,” Dorsey said. “Administration gives me a chance to influence that in a small way, but hopefully in a meaningful way.”

Nearly half of the university’s total enrollment is in the Franklin College, and all of the 26,000 or so undergraduates on campus take foundational classes from the Franklin College in disciplines such as English and the sciences. Some aspects of the education that the college provides can be measured and benchmarked—the significant amount of time that students spend outside of the classroom on academic work or their acceptance rates to leading graduate and professional schools, for example. Other aspects are difficult if not impossible to measure, Dorsey said, but just as important.

“After graduation, are students going out and having rewarding lives—not just jobs, but also lives?” he asked. “Do they find that the U.S. history course they took has helped them understand the political system and has informed them as voters, for example, or do they find the course in biology that they took means that they can have more informed discussions with their physician? The liberal arts education hopefully touches on many facets of life.”

As the economy improves, Dorsey hopes to build on the momentum of the university’s faculty hiring initiatives and strategically replenish tenure-track faculty positions that have been lost to attrition. He aims to enhance the college’s budget through an increased emphasis on fundraising and explore ways to help faculty stay competitive in the increasingly challenging environment for garnering research grants from federal agencies and foundations.

The Franklin College was the first college at the nation’s first state-chartered university, and Dorsey said he looks forward to working with faculty and staff to build upon that history of leadership and innovation in higher education.

“We want to honor the past and the knowledge and traditions that have developed, but also make certain that doesn’t bind us in ways that don’t allow us to explore new directions in scholarship and teaching,” he said.