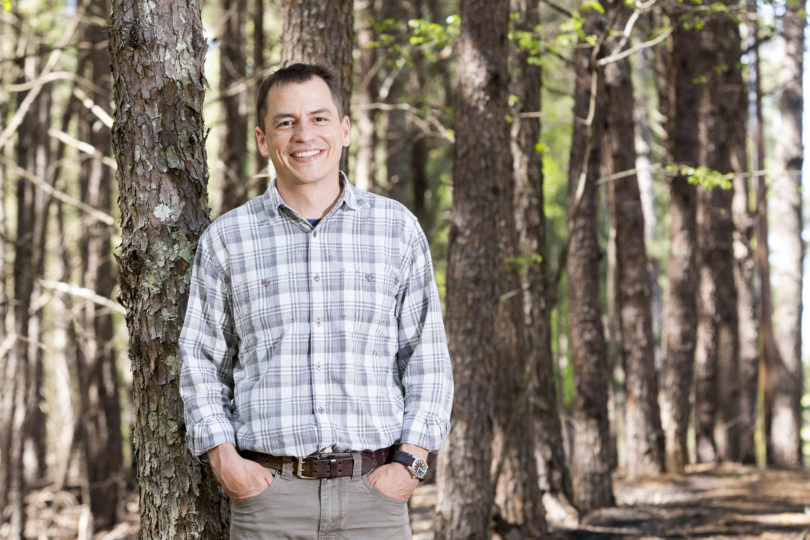 Chase Cook was always interested in natural resources. He just didn’t always know that it was a potential career choice.

Growing up on a small farm in Warner Robins, Cook enjoyed his rural upbringing, which guided his initial career interests. Those interests shifted to forestry as a sophomore at UGA when a random conversation with soon-to-graduate students from the Warnell School of Forestry and Natural Resources opened his eyes to opportunities “out in the woods.”

Soon after, Cook began pursing a water and soil resources major within Warnell.

After graduating from UGA, he worked for Temple Inland, first as a procurement and harvesting technician in northeast and west Georgia and later as a land management forester in northwest Georgia. Next, Cook found himself in a temporary, interesting detour working part time as a research assistant for the Flint River Water Policy and Planning Center in Albany. This path led to higher education and getting a master’s degree in applied economics, which in turn led to a senior analyst position with the U.S. Government Accountability Office—first in Washington D.C., and then in Atlanta.

He and his wife and children made a home base in Athens, with him commuting to his job in Atlanta and elsewhere.

He enjoyed civil service, but the Atlanta commute took its toll and his desire to refocus on natural resources were always in the background.

Although his “career path appears to have wandered around a bit,” he found himself with a unique skill set suited to an opportunity to serve as the coordinator for Georgia-based efforts of the Sustainable Forestry Initiative, a position housed at UGA.

The SFI is a nonprofit organization that works to increase sustainable practices in land and resource management and usage. On behalf of the Georgia SFI Implementation Committee, Cook coordinates a statewide logger education program, outreach to family forest landowners and education on numerous wildlife and natural resource-related topics.

Cook’s favorite part of the job is “connecting the dots for people” when it comes to relating everyday products they couldn’t or wouldn’t want to go without back to natural resource management. The production of toilet paper, notebooks, and furniture, for example, can’t happen without harvesting trees. He also enjoys connecting people who ordinarily might not have the same perspective on natural resource-related issues, such as loggers and people from conservation organizations, and getting them to understand mutual needs.

As the Georgia coordinator, he meets with large landowners, forest products companies, and forestry and natural resources state agency representatives to discuss the promotion of sustainable forestry principles and how SFI efforts can be improved.
It’s important for people to understand that healthy markets are a vital tool for healthy forest stewardship, Cook said.

“I think from an early age, myself included, we’ve got this idea that it would be fantastic if we never needed to cut down a tree,” an idea that is unrealistic, Cook said. “And I think the misunderstanding therein lies in the nature of nature. It’s not static. Left alone, natural environments don’t reach some park-like plateau condition, never changing thereafter. Nature doesn’t work that way, even in the absence of people.

“We can provide for the material needs of society today and in the future while still balancing the health of natural systems,” he also said. “It’s just a matter of understanding what you’re dealing with and doing a good job with the management and balance.”