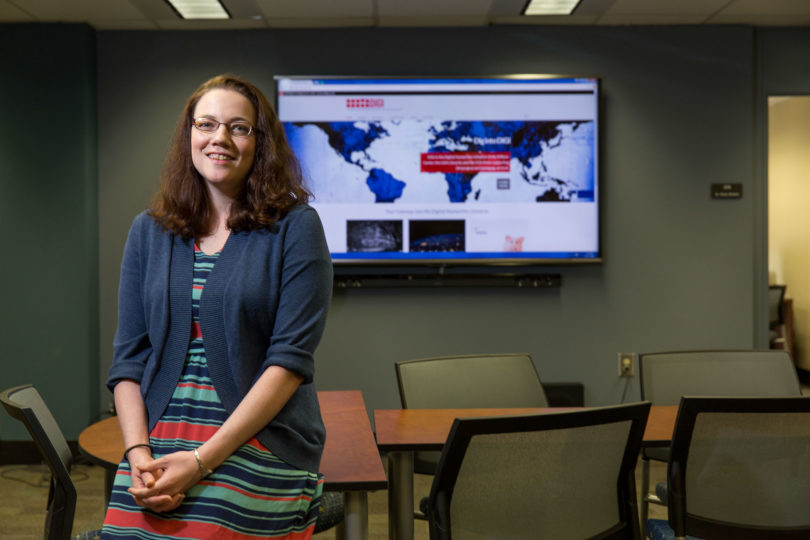 It took Emily McGinn some time to figure out what she wanted to do with her life.

She worked in marketing for a wedding invitation company for eight years, as an intern at Weber-Shandwick Public Relations in London and wrote more than 250 articles for real estate magazines Broker Agent Magazine and Top Agent Magazine. She earned two degrees in English and a doctorate in comparative literature before a chance project introduced her to the digital humanities while working on her doctorate.

“I was voted most likely to be able to learn the technology we needed out of the group for the project we wanted to do,” McGinn said. “Then it became clear that combining the outside knowledge that I had from the corporate world with the academic side was a good fit for me. Digital humanities wasn’t something that I knew existed or that I actively sought out.”

After serving as a post-doc at Lafayette College in Pennsylvania, where she established the role of digital humanities fellow, McGinn moved more than 700 miles south to take the inaugural position of digital humanities coordinator where she oversees the Willson Center Digital Humanities Lab, consults with faculty and students, and develops DH curriculum at UGA.

“I have an enormous amount of autonomy in my role at UGA, which is great but also terrifying,” McGinn said. “I can really take this position in whatever direction I want to build it.”

One of her first tasks was introducing people to the concept of digital humanities and what research methods it entails, a task that is ongoing in her faculty learning community in the Center for Teaching and Learning and in the classes she helps develop and teach with faculty from all across campus.

“Digital humanities involves using the power of the computer to aggregate humanities information. So, for instance, instead of reading one book, you can read 1,000 books at once,” McGinn said. “It enables humanities scholars to ask different research questions about the material they’re studying. I wouldn’t be able to ask my own brain if I read 1,000 books to remember all these things about themes, syntax, patterns and the like and index them, but I can with a computer.”

McGinn pairs up with faculty to develop projects that students can take to earn the digital humanities certificate, which introduces students to the hands-on quantitative side of humanities research. One of her favorite projects so far has been Death and Human History in Athens, a project that has spanned five classes-two classes in history and classes in African-American studies, historic preservation and human osteology from the anthropology department. McGinn goes into each class to work directly with the students, teaching them via workshops and trainings about data collection.

“Going forward, I think we’re going to see much more of an emphasis on data,” she said. “And as much as I really, really resist ‘scientizing’ the humanities—I really don’t want to do that at all-I think there is merit to expanding the horizons of humanities scholars and letting them explore data—driven methodologies.”

Digital humanities at UGA recently received a boost among faculty when it became eligible for the Study in a Second Discipline fellowship from the Office of the Senior Vice President for Academic Affairs and Provost. The impetus was largely due, McGinn said, to a push by Roxanne Eberle, an associate professor of English in the Franklin College of Arts and Sciences. McGinn is currently working with Eberle each week on a project analyzing the letters of Amelia Opie, a British novelist and poet from the late 1700s.

She’s also collaborating with digital humanities coordinators throughout the state to figure out how best to share resources like experts, technology and tutorials.

“Thinking about data in a different way is useful for a lot of disciplines,” McGinn said. “I’m open to helping anyone, and I’m willing to work on many different projects in whatever form they take.”