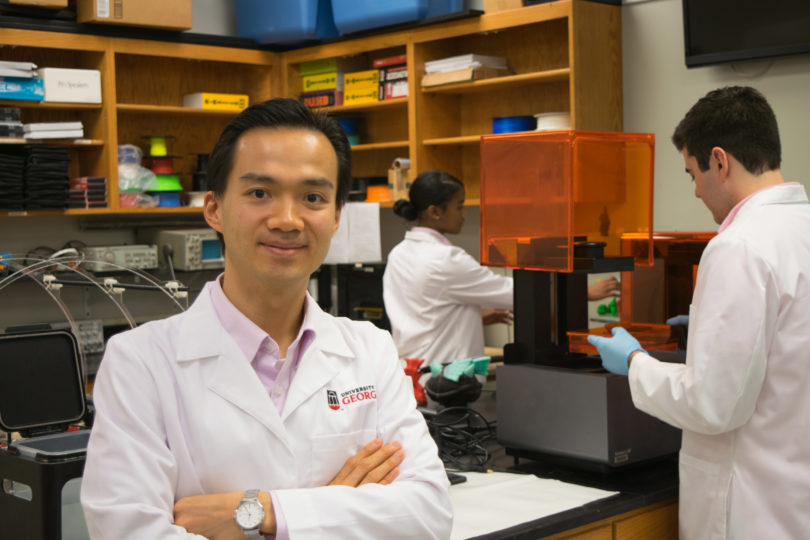 Zion Tse, an associate professor of electrical and computer engineering, and his students are one of five teams participating in UGA's new Innovation Corps, or I-Corps, Accelerator program. (Photo by Amy Ware/UGA)

For pediatric patients, MRI is one of the best diagnostic tools because it doesn’t involve exposure to radiation, unlike X-ray and CT scans. But it does involve loud noise and a dark, confined space that children can find intimidating, and it requires them to lie still for long periods of time. Sedating patients is an option, but IV pumps and other monitoring and life support devices aren’t allowed near an MRI machine and its magnetic field.

Zion Tse, an associate professor of electrical and computer engineering, believes he can solve this problem. He and the students in his Medical Robotics Laboratory are building an infusion pump that can operate inside an MRI, allowing physicians to sedate patients for the duration of the imaging.

“There’s a commercially available pump, but it’s way too expensive,” Tse said. “It’s cost prohibitive for a lot of hospitals.”

His group has spent the past five years developing MRI-compatible devices, and he believes he can build and manufacture a viable alternative for a fraction of the cost.

Tse and his students are one of five teams participating in UGA’s new Innovation Corps, or I-Corps, Accelerator program. The six-week program helps teams determine if there is a market for their idea, technology or product, said Ian Biggs, I-Corps lead and senior associate director of UGA’s Innovation Gateway.

“The worst that can happen is somebody spends two to three years of their time and the best part of a million dollars on developing a product that nobody wants,” he said. “Over 40 percent of all startups fail because there’s no market.”

I-Corps removes that risk, according to Biggs.

In the spring, UGA was named an I-Corps Site by the National Science Foundation, providing the university with an in-house means for faculty to assess the commercial possibilities of their inventions.

The award enables UGA to serve up to 30 new startup projects a year and provides funding to help teams better evaluate their ideas, improve risk assessment and define success earlier. For three months, the program contributes up to $3,000 per team that can be used to create a prototype; travel to consult with potential clients or experts; and to seek training or education.

“The I-Corps Site designation helps the university ensure that the full commercial potential of inventions is realized,” said David Lee, vice president for research. “As a land- and sea-grant university, it’s part of our mission, but it’s also important to show funding agencies that there’s a real-world outcome for their investment.”

At an I-Corps meeting in October the group discussed customer interviews, which require getting out of labs and offices to find out what potential customers think, need and want. Jared Bybee, startup catalyst with Innovation Gateway, emphasized that interviews are not a pitch—they’re about asking questions.

Tse and his students are interviewing radiologists, anesthesiologists, MRI technologists and nurses to design an infusion pump that will address everyone’s needs. Getting this information early will help answer the question that’s at the heart of the I-Corps program—is the idea worth pursuing?

If the answer is yes, the I-Corps experience will have prepped a team for the next round of funding. If the answer is no, a researcher can repeat the process with a new or revised project. The purpose is to avoid having a researcher “make an invention and then it sits on the shelf,” according to Biggs.

“We actually want to move it out into the market in the most useful form it can be,” he said.

Tse has the same goal.

“I enjoy doing basic research, running the lab, developing new intellectual properties,” he said. “But at the same time, I would like to see our ideas used in hospitals, making a big impact.”