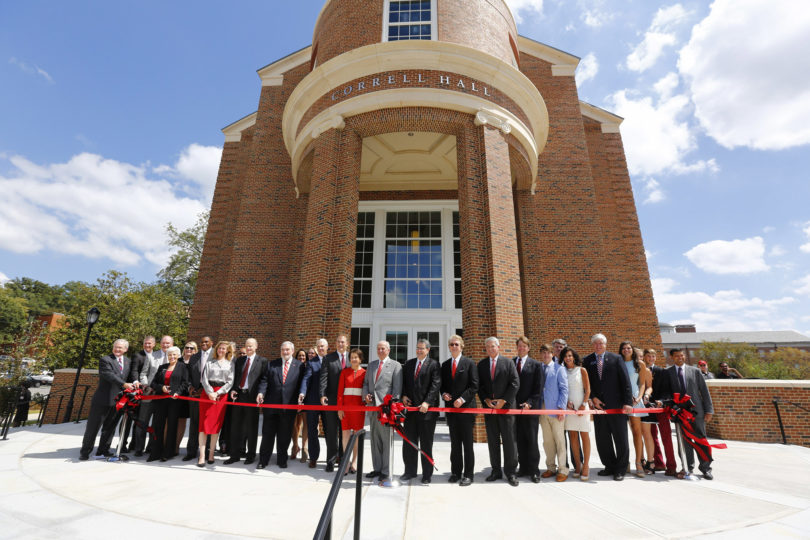 Athens, Ga. – Today, before a crowd of hundreds, the University of Georgia Terry College of Business dedicated Correll Hall, Phase I of its future home, the Business Learning Community, and ceremoniously broke ground on Amos Hall, the centerpiece of the project’s second phase.

“As the times have changed, so has the Terry College, which has remained on the leading edge-always adapting in order to prepare the next generation of business leaders,” said UGA President Jere W. Morehead. “The Business Learning Community was born out of this pioneering spirit and commitment to excellence.”

The new complex, located on the corner of Lumpkin and Baxter streets on UGA’s North Campus, provides the Terry College with facilities that encourage innovation and learning in an environment that fosters collaboration, said Terry College Dean Benjamin C. Ayers.

“This is a very special day for the Terry College, for its alumni, friends, faculty and staff and most importantly for its students,” Ayers said. “The construction of the Business Learning Community will forever impact thousands of Terry undergraduate and graduate students, who will achieve great things as a result of their education at the University of Georgia.”

Correll Hall, which serves as home for the college’s graduate programs, opened for classes at the beginning of this fall semester. The 74,000-square-foot facility includes a business innovation lab, multiple project team rooms and a graduate commons. Construction on the facility, which was funded entirely by $35 million in private donations, took two years to complete.

“Ada Lee and I are immensely proud to be tied to the legacy of the Terry College and the University of Georgia, which has helped so many young men and women over the years. I know firsthand that the state of Georgia and its workforce benefit directly from the teaching and learning that happen here. We’re excited to enhance that contribution to our state and nation by helping the Terry College reach new levels of excellence.”

Construction of Amos Hall, the centerpiece of the second phase of the Business Learning Community, is slated to be completed in 2017. In all, Phase II will span approximately 140,000 square feet and will include two large auditoriums, eight classrooms, a trading room, a behavioral lab, an undergraduate commons, conference rooms, and faculty and staff offices. Phase II is supported by $43 million in state funds and $14 million in private donations.

“I was honored to be asked to chair this capital campaign and am humbled by the notion that the Amos name will forever be linked to this incredible learning institution,” said Dan Amos. “I will continue to support UGA so that future generations will have the opportunity to learn from some of the greatest business minds in the nation.”

About Terry College
Founded in 1912, the Terry College of Business at the University of Georgia is the flagship business school in the state and is consistently ranked among the top in the nation. Terry faculty are committed to high-quality research and instruction, preparing students for the global business community. Terry offers an array of undergraduate, graduate and executive programs. The college is home to the renowned Selig Center for Economic Growth. For more information, see http://www.terry.uga.edu.