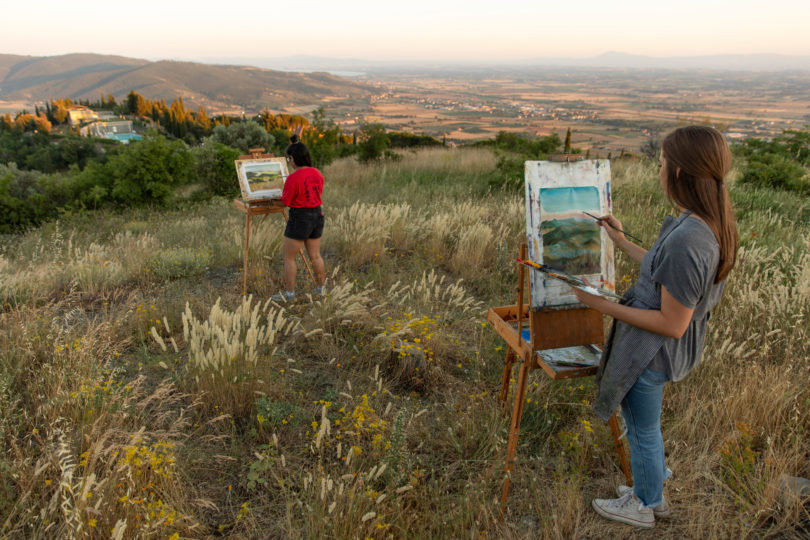 The 50th anniversary event on Aug. 10 celebrates a beautiful friendship between an Italian town and a university

Prisca Zaccaria grew up in Cortona, Italy, and every summer for as long as she can remember, she anticipated the day when the Americans would arrive in Cortona from Rome by bus. These Americans were students in the University of Georgia’s study abroad program in Cortona.

“I remember growing up seeing these different people in town. They would wear shorts and baseball caps and running shoes. Rayban sunglasses,” Zaccaria said. “They took their cameras everywhere, and they would be photographing, painting and sketching everything they saw. The views, the architecture, and art that the American students marveled over were all things we locals took for granted.”

Zaccaria is part of the UGA Cortona inception story. Her father worked for the Ministry of Public Education in Italy, and when UGA professor Jack Kehoe stumbled across the small town of Cortona on his way to Rome back in 1969, he met with her father and asked if there was any room in town for study abroad students. Zaccaria’s father offered up the elementary school, which was vacant during summer, and the Cortona program was born.

The program turned 50 this year, and an alumni celebration  takes place Aug. 10 in Sandy Springs, Georgia.

After making friends with many of the UGA students and professors from the program, Zaccaria wanted to know what it was like to study and live in another country, so she moved to Athens where she studied at UGA. She graduated in four years and married a local man. They had two daughters and the older one—now a senior at UGA—studied in the Cortona program last year.

Zaccaria, who works as a senior director of prospect development for the Department of Alumni Relations, said, “I feel like I went full circle. First, I was a student at UGA, and now I work in fundraising for the University of Georgia. This is perhaps a way for me to give back to an organization that has given me so much. UGA is my home away from home!”

On Aug. 9, 2017, after many years of living in the United States, Zaccaria became an American citizen. 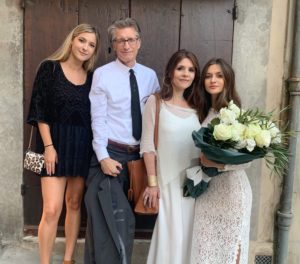 Prisca Zaccaria celebrated 25 years of marriage in Cortona this summer with her husband and daughters.

The UGA students made a big impact on Zaccaria’s life and the lives of many other residents of Cortona. For example, well known Italian musician and rapper Jovanotti’s music was influenced by the 1980s rap music students brought to his hometown.

But the impact worked both ways. Many of the UGA students who studied in Cortona were deeply affected by their experience. For some, it changed their lives.

Take Rebecca Ghezzi, who first met her husband while studying in the Cortona program in 1988. Roberto was a Cortona resident who owned a specialty shop on the main street, Via Nazionale. “He sold wine, cheese and truffles among other things. I went in there to buy some things to take home and met him for the first time. Then I came back the next summer and the second time I met him, we went out!” she said.

They were married a few years later in 1992. “We sat down at one point and discussed what we were going to do because his visa was running out and neither of us wanted to leave the other. We decided to get married in my hometown, first at City Hall in Waynesboro, Virginia, and then a year later on the same date, at the neighborhood church of San Niccolo in Cortona, surrounded by friends and family,” she explained. 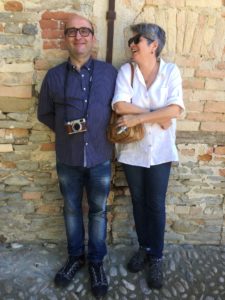 Rebecca Ghezzi and her husband, Roberto, in Cortona.

They returned to UGA together. Ghezzi finished up her graduate degree in printmaking, and Roberto studied English as a foreign language. After living in Washington, D.C., for several years, and after the birth of their two daughters, they returned to Cortona where Ghezzi taught printmaking and drawing in the UGA Cortona program and worked in the administration office. Now, 27 years later, their lives are divided between Cortona and the United States. Rebecca runs an art gallery in Blacksburg, Virginia, and Roberto is a real estate agent in Cortona. There is a lot of back and forth, said Ghezzi, who is working on getting dual citizenship, as she is the only one in the family without it. She plans to retire in Cortona with her husband. 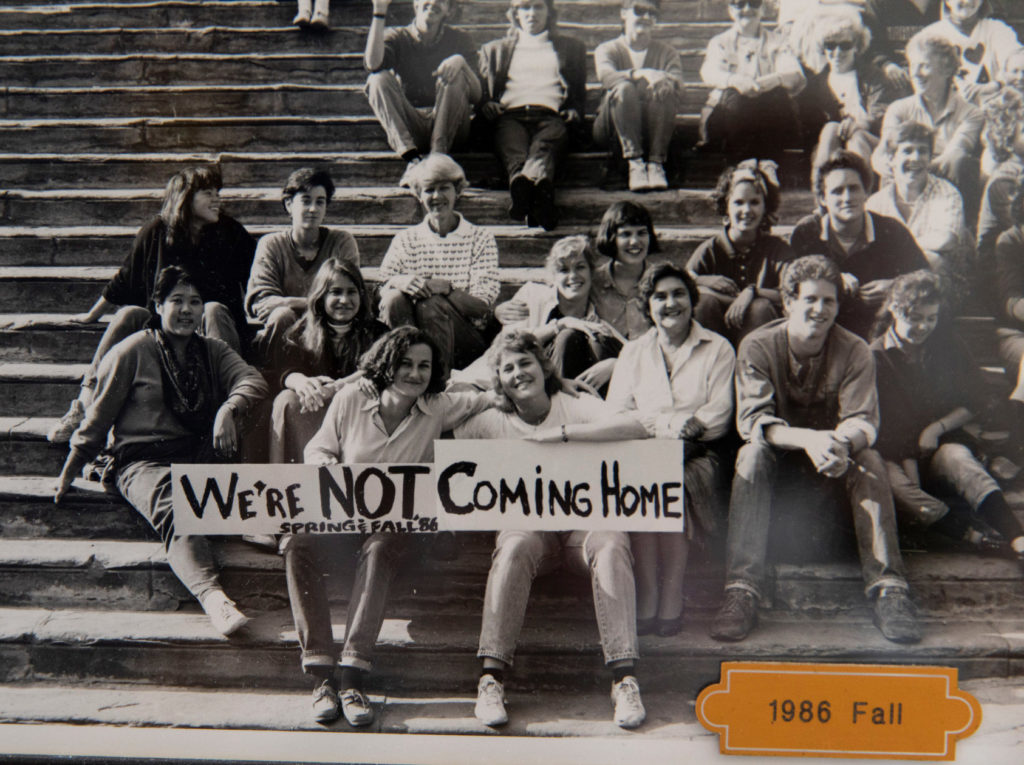 UGA students who studied in Cortona in 1986.

A chapel in dire need of repair

UGA alumna Rita Morgan Richardson was also deeply affected by Cortona — and she didn’t even study there. Her son Zach did. She and her husband Tim fell in love with the area during a visit to see Zach and then decided to buy an apartment in the neighboring town, Castiglion Fiorentino. Their apartment is part of the same palazzo as a stunning, crumbling baroque chapel. “We would walk by it all the time,” said Richardson. “One sunny day I was walking by it, and I just knew that we were supposed to save it.”

The chapel, Oratorio San Filippino, had been abandoned for 50 years, but Richardson convinced her husband they needed to take on the project, and the couple has been doing just that since Richardson’s epiphany outside of the chapel doors back in 2011. 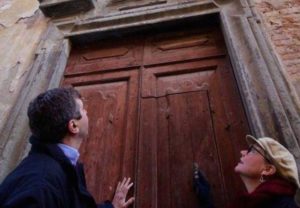 Rita and Tim Richardson outside of the chapel they are working to save.

“Nothing happens quickly in Italy,” Richardson explained. When she and Tim finally got in to see the chapel, which is owned by the Archbishop of Arezzo, they returned home, made a video and started sending it out to Italian American organizations. Four years ago, they established a nonprofit in the U.S. To date, they have raised $50,000 for a new chapel roof. The goal is to raise another $450,000 to completely restore the chapel, which will be used for weddings, communions and other events, providing an economic boost to the town’s struggling town center. Included in the restoration are adjoining apartments that will be available to visiting scholars, clergy, artists, writers and pilgrims of all kinds.

More evidence of Cortona’s lasting impact on the Americans who studied there can be seen in the chapel’s donors. During the initial fundraiser in Georgia, four UGA artists came forward on their own and offered to donate art to the event because they had studied in Cortona, Richardson said. “Each one separately told me that studying in Cortona changed their life.”

Chris Robinson started as a student in the Cortona program, studying ceramics and playing on a local soccer team while earning his graduate degree. After graduation, he was asked to come back and work full time as a program assistant. “There are a lot of logistics to operating a studio program in a medieval hill town,” he said. 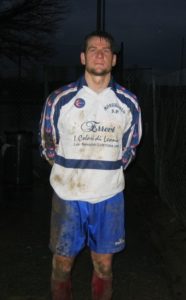 Chris Robinson during his time playing on a local Cortona soccer team.

A few years later, he became associate director of the Cortona program and moved to Italy full time for the eight years. In 2011, he became the director and moved back to Athens, where he also teaches ceramics at UGA.

Robinson said the small size of Cortona, added to UGA’s long relationship with the town, makes it an intimate and unique study abroad experience. “Students get to connect with café and shop owners, and they have their favorite restaurants.”
The cultural phenomenon, or event, called la passeggiata has an impact on the students as well. “Every evening everyone walks up and down the square, greeting each other. It’s a time to be seen and see others. In a bigger city it’s much more difficult to connect with the local community that way,” Robinson said.

For art students, the program also offers the opportunity to see all kinds of art and architecture, then come right back into the studio and work. “It’s a significant part of the visual and creative process,” said Robinson. “The culture, history and setting all tie into the experience.”