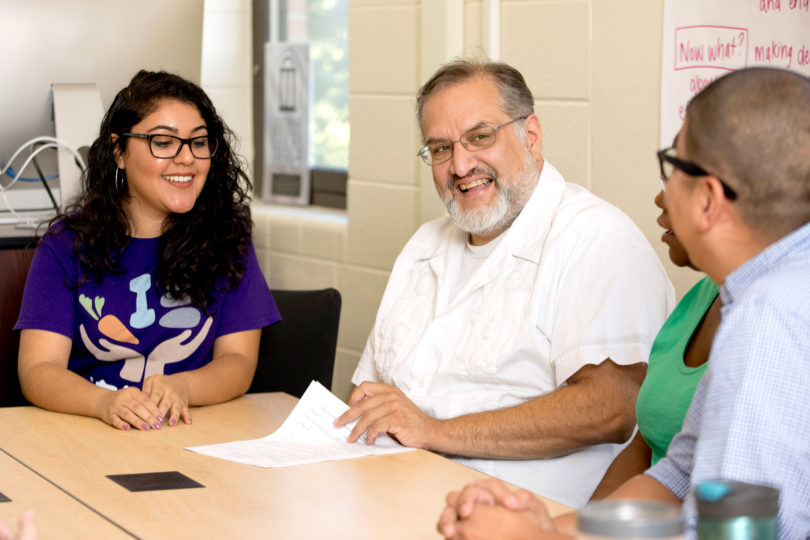 Edward Delgado-Romero focuses his research on multicultural psychology and the challenges of bilingual therapy. (Dorothy Kozlowski/UGA)

Edward Delgado-Romero is a bilingual Latino, a first-generation college student and a son of immigrants. His earlier life experiences led him down a road of discovery; service; and, eventually, a world of change for not only other first-generation students who share his passion for helping others but also an entire community.

Surrounded by other children of immigrants while growing up, Delgado-Romero, a professor in the College of Education’s counseling and human development services department, noticed a lack of effective counseling services for members in the Latino community.

“I realized there wasn’t a lot of infrastructure or support for Latino students,” he said. “I saw some of my friends get held back for many years in school because they couldn’t speak English. As I grew older, I started understanding the role of culture and mental and physical health, and that a lot of professionals are not trained to address culture and language as part of health.”

With this in mind, Delgado-Romero focused his research on multicultural psychology and the challenges of bilingual therapy, which previously had not been studied closely by psychologists.

To address this gap in the field, Delgado-Romero started the Behavioral Intervention for Exercise and Nutrition or ¡BIEN! Research Team at the University of Georgia. Composed of a diverse group of graduate students interested in cultural and linguistic ­psychological research and outreach, the team serves some of the community’s most marginalized populations.

In 2015, Delgado-Romero’s passion to help the community and create a hands-on training ground for his team led to the development of the ¡BIEN! Clinic at the Athens Latino Center for Education and Services, or ALCES, which he was a board member of before starting the clinic.

“What the students get out of it is training,” he said. “They learn at every level, discuss the intersection of language and culture, and they learn how to interact with other professionals. The key for bilingual students is that they receive supervision in Spanish by a Spanish speaker, which does not always happen.”

A Georgia licensed psychologist, Delgado-Romero supervises every student who works at the center. The aspiring counselors, 10 of whom are bilingual English and Spanish speakers, are interested in using their bilingual abilities to help underserved populations.

In fact, many of the clients at ALCES have never had the opportunity to speak in their native language about any trauma they’ve experienced at home or school.

“To do so is usually an overwhelmingly emotional experience because they’ve always had to speak through translators and couldn’t say everything that was really going on,” said Delgado-Romero. “They’ve always had an intermediary. They never sat down with someone and just said, ‘This is what’s going on for me,’ in their own words. And the cases tend to be very emotionally impactful. There’s been a lot of trauma that’s gone unaddressed, and so we work on that together.”

Over the past four years, ALCES has served more than 400 non-English speakers in ESOL instruction and has provided around 70 bilingual counseling sessions to help Latinos achieve self-sufficiency and build a better life for themselves and their families.

In addition to supervising bilingual counselors at ALCES, Delgado-Romero co-leads an interdisciplinary partnership at Mercy Health Center in collaboration with professor Linda Campbell in the counseling and human development services department and public service associate Linda Logan in UGA’s College of Pharmacy.

Delgado-Romero plans to assess the effects and benefits of UGA’s treatment team, which is currently comprised of students in psychology, pharmacy, counseling and law.

Preliminary findings show that people who participate in part of the system or program tend to take better care of themselves overall.