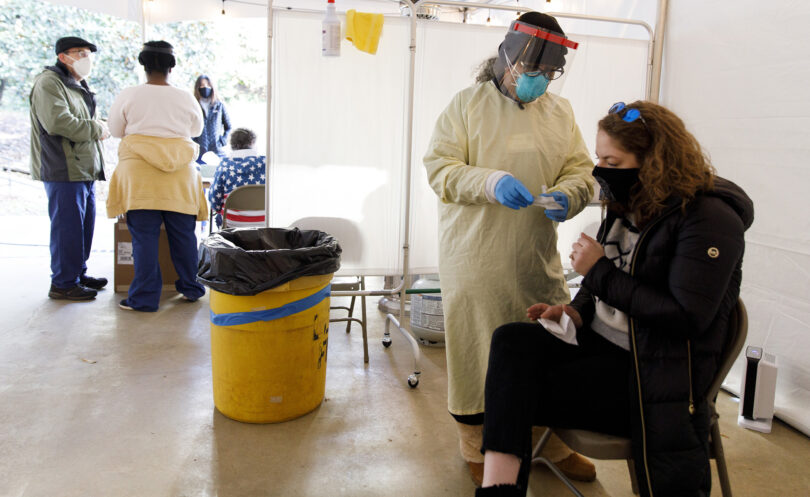 The University of Georgia has expanded its surveillance testing capacity as students, faculty and staff return for the Spring Semester. Classes started on January 13, and the results of the first week of testing with students back on campus show modest improvement over the previous week.

A total of 2,902 tests were administered at the Legion Field surveillance site and in pop-up locations that included high-traffic areas such as residence halls, the Tate Student Center and locations on North and South Campus. Of those tested, 90 yielded positive results for a positivity rate of 3.10%. This rate is down from 3.89% the previous week.

Overall, 261 individuals reported positive tests through the DawgCheck system for January 11 – 17. Of those, 198 were students, 55 were staff, and 8 were faculty members.

“I am not surprised that we are seeing more cases than we did at the end of the Fall Semester, given the post-holiday increase that we are experiencing across the state and nation,” said Dr. Garth Russo, executive director of the University Health Center and chair of UGA’s Medical Oversight Task Force. “However, these numbers actually indicate a slight improvement over the previous week, both in terms of number of cases and positivity rate. I’m encouraged that interest in surveillance testing remains high—but we need even more members of our community to take part.”

Russo says the University Health Center and Veterinary Diagnostic Laboratories had originally planned to offer up to 1,500 free tests per day through January 22—the end of an initial three-week period at the start of the semester. However, they now plan to sustain that level for the foreseeable future.

The University reports test results on a weekly basis each week on the University Health Center website: https://uhs.uga.edu/healthtopics/covid-19-health-and-exposure-updates. The data consist of tests from four sources: (1) tests conducted through UGA’s surveillance testing program; (2) tests conducted at the University Health Center; (3) reports from Athens-area medical providers; and (4) reports of positive tests from other sources.

Information on the UHC website also includes supplemental data on the experiences of students who have received positive tests. This information is obtained through a follow-up survey sent through the DawgCheck system 14 days following a positive test. The responses allow members of UGA’s Student Care and Outreach unit—who reach out to every student who reports a positive test—to provide additional support to those with ongoing concerns.

The follow-up data for the week of December 28 – January 3 indicate no student respondents reported hospitalizations and that 95% reported they had fully recovered from their symptoms.

“As a campus community, we know what we need to do to get through this—wear our face coverings, maintain social distancing, wash our hands, and avoid social settings where you can’t keep your distance,” said President Jere W. Morehead. “Now is not the time to let down our guard. I urge all members of our campus community to remain vigilant and make wise decisions.”

The University is maintaining a stock of nearly 500 rooms to accommodate isolation and quarantine housing, as needed. At present, 8.6 percent of the housing stock is in use.