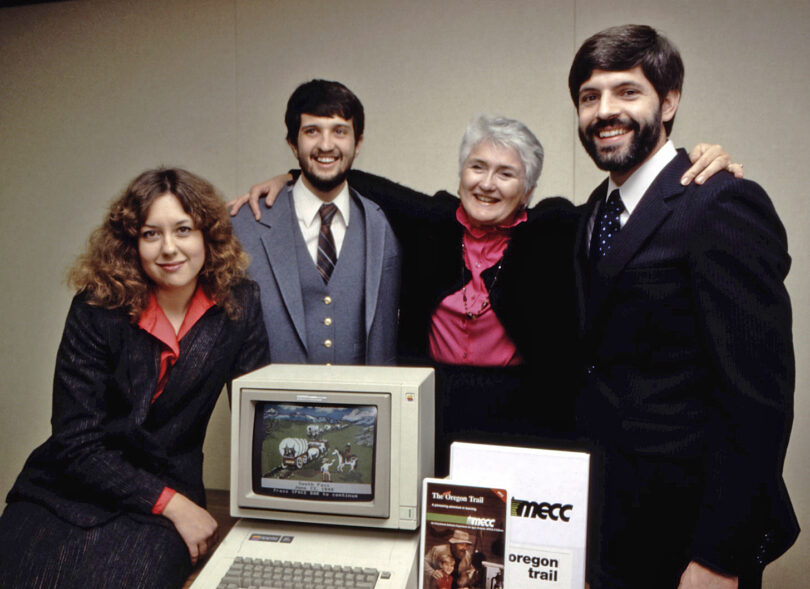 Creating the classic 80s version of The Oregon Trail

If you played games on your grade school’s computer in the late ’80s and early ’90s, if you’ve ever traversed a river in an ox-drawn wagon, or if your avatar has ever died of dysentery, then there’s a good chance you’ve come across the work of R. Philip Bouchard.

Bouchard BS ’76 is a lifelong science educator, a nature photographer, a writer, and, you guessed it, a creator of the classic 1980s version of The Oregon Trail.

To be clear, Bouchard didn’t invent the iconic game.

The first iteration of the computer game, called Oregon, was devised in the early 1970s by three student-teachers who were amateur software designers. In that game, players bought supplies, hunted for food, and tried to survive the journey out west. The entire game was text-only. The computer printed out prompts, and players typed in their responses. To shoot wild game for food, you had to quickly and flawlessly type the word “bang” when cued.

But chances are what you remember most about The Oregon Trail—controlling a third-person shooter to hunt bison, squirrels, and bears; stopping by famous landmarks to buy supplies; and having family members getting sick with cholera, typhoid, and, yes, dysentery—were all unique to the revamped 1985 game created by the Bouchard-led team at the software company MECC.

I was hoping for something that would be noteworthy at the time. I hoped people would still be playing it for a good five years. — R. Philip Bouchard, creator of the classic home computer game, Oregon Trail

From Science to Software

From an early age, Bouchard was fascinated with learning about the world around him. He recalls wandering around the woods near his Cobb County neighborhood as a kid with a tree identification book trying to tell one oak from another and which pine was which.

“I developed a strong interest in nature,” he says. “From that point on, I would be giving nature tours to a younger sibling and neighbors.” 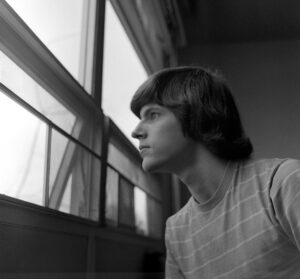 Philip Bouchard as a UGA students the 1970s in Lipscomb Hall. (Submitted Photo)

As a University of Georgia Honors student, Bouchard chased all sorts of interests. He majored in botany and explored the concepts of ecology. But in his senior year, he enrolled in a computer programming course and learned how to write code; at that time, everything was done on punch cards. He was hooked.

Bouchard would get his master’s from the University of Texas, where he learned to program computer models for understanding how different factors created ecological changes. And through that, he honed skills in educational computer programming. That experience helped him land a job at MECC, a software company specializing in K-12 educational computer software. One of its most popular programs was Oregon.

As computer gaming began to explode in the early 1980s, Bouchard urged his bosses to update MECC’s signature game with better graphics and new features. In 1984, the company agreed and put Bouchard in charge of the five-person team tasked with reimagining The Oregon Trail.

The team’s two directives were: 1) capture the magic of the original game and 2) create an exciting version that would succeed in the “home market,” just as personal computers were on the rise.

For inspiration, Bouchard looked to arcade games and what was performing well on the Commodore 64 and Atari home systems.

“I put a great deal into analysis into what factors contribute to popular games,” he says. “What makes you want to go back over and over again?”

With what he learned, the team aimed to create a game that was hard enough that most players failed on the first or even second attempt but would come away believing that they could do better.

They also upgraded the hunting feature with a formidable third-person shooter challenge and brought a historical world along the trail to life.

All these ideas had to fit on a 5.25-inch floppy disk with 280K of storage space (a fraction of the size of a single smartphone photo today). 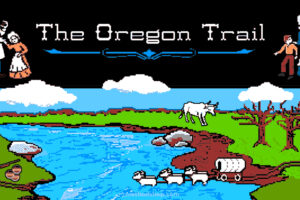 Bouchard and his team built the 1980 version of Oregon Trail, creating a game that was massively popular in its time. Journeys on the Oregon Trail remain beloved memories for generations of gamers.

The Oregon Trail went on to sell over 65 million copies over its decades of existence and, at one point, made up one-third of MECC’s annual revenue. Even today, it lives on in T-shirts and internet memes with “You have died of dysentery” and other nostalgic references. You can still find newer versions, not to mention the classic version of the game online.

Bouchard says educational games, at their best, install “little coat hooks in your mind that you can hang ideas on later.” And the popularity of The Oregon Trail taught a generation a few things about American geography, not to mention just how treacherous life could be on the frontier.

Bouchard produced other games for MECC, including Number Munchers (a Pac-Man-esque math game). But none of them topped the popularity of The Oregon Trail.  Later, Bouchard designed web-based applications for companies like FedEx and Morgan Stanley before retiring from software.

These days, Bouchard is still finding ways to educate the public about the world around us.

His new book, The Stickler’s Guide to Science in the Age of Misinformation, is the most recent effort. In it, Bouchard goes back to his roots as a science student to explore subtle public misperceptions about scientific topics—like the idea that there’s no gravity in space or that humans only have five senses—and delves into the real science behind them. 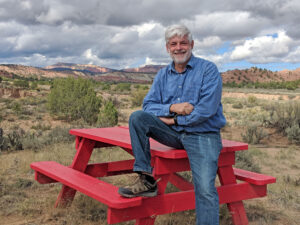 He hopes such efforts continue to delight and teach just as they did with The Oregon Trail, which Bouchard admits succeeded well beyond expectations.

“I was hoping for something that would be noteworthy at the time,” he says. “I hoped people would still be playing it for a good five years.”

Instead, he helped build on something that endures even decades later.