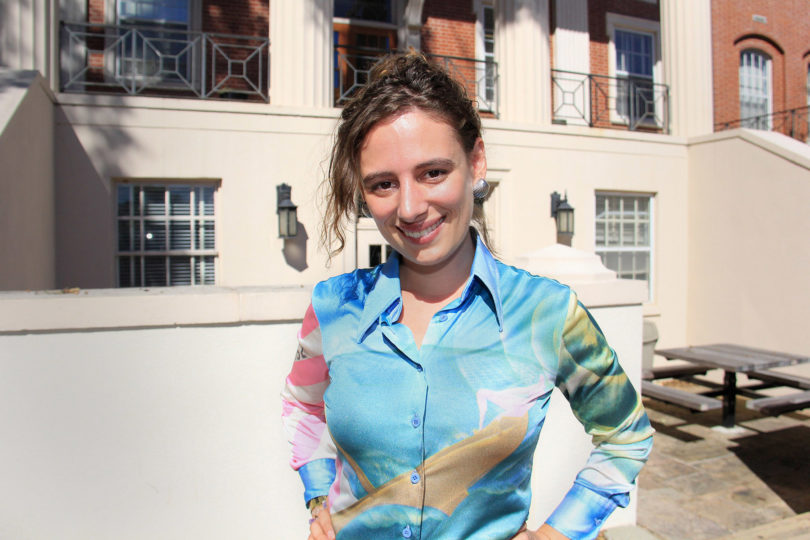 Gabrielle Lucille Fuentes is mastering the art of creative writing at UGA. She came to the program with one unpublished novel

Gabrielle Lucille Fuentes, a third-year creative-writing doctoral candidate at UGA, types furiously away at her computer, clicking between edits and additions to her first novel.

The year is 1975 in Spain. Police arrive at the door of Mosca’s grandmother’s door to hand over her brother Alexis’ medallion. Mosca’s brother has become one of the “disappeared,” taken by the secret police to never be seen from again.

So begins The Sleeping World, set in the political turmoil of Spain in the 1970s, which will be published by Simon & Schuster (Touchstone) next year.

“The book follows Mosca, the narrator, in finding her kidnapped brother,” Fuentes said. “She’s part of a group of university students resisting the government. It’s an emotional journey that takes Mosca through Spain and eventually France.”

Fuentes drew inspiration for the book from her time living in Spain.

“I saw that some older people were more fascist and conservative in their beliefs, while some younger people were anarchists and trying to rebel,” she said. “I used those ideas to come up with the story.”

The rest of the novel fast-forwards two years, taking place in 1977, when there is an absence of power. Fascists fight anarchists for control, students take part in protests in the city and the new order of life has yet to be decided.

“My book is a work of literary fiction but has elements of magic and realism,” she said. “Even though the book is set in the 1970s, I still saw this divide between the fascist and anarchist ideologies when I lived in Spain. It’s about the connection of then and now … about the tension between forgetting and remembering.”

Fuentes wrote The Sleeping World as a full-length piece for her Master of Fine Arts program in fiction at the University of Colorado, Boulder. After graduation, she started her doctoral program at UGA, where she actively sent out her manuscript and made edits.

In their first two years, doctoral students take courses on literary history and disciplinary change within the English department. Before their third year, students study for comprehensive exams. Finally, in their fourth and fifth years, students complete a creative dissertation, which is often a full-length work.

Fuentes has two books in the works—she received an offer from Simon & Schuster (Touchstone) for her first novel, and as of fall 2016, it will be available everywhere books are sold. Along with wrapping up The Sleeping World, she hopes to have a draft of her second novel finished by the end of this year.

“It’ll be totally different than The Sleeping World,” she said. “It’s set in the 1930s at a religious commune up north. It’ll be a retelling of Wuthering Heights.”

A continuous writing pace is not uncommon for students in UGA’s Creative Writing Program.

“Many of our students already have one or two books when they arrive at UGA,” said Magdalena Zurawski, an assistant professor of English and creative writing. “By the time they leave, it’s not unusual for them to have three or four books out.”

Like the students, the Creative Writing faculty members are expected to publish books. Zurawski, who has worked closely with Fuentes, has written a novel titled The Bruise and a collection of poetry titled Companion Animal.

With nearly two books completed, Fuentes said UGA has been a great decision for her career in terms of its classes, mentors and creative environment.

“I picked Athens because it’s a town that embraces artists,” she said. “In this town, it’s realistic to be an artist and make a living. It’s really a place with a vibrant arts culture.”

Between writing and working with her agent and publisher, Fuentes also stays busy taking courses and teaching an undergraduate Introduction to Creative Writing class.