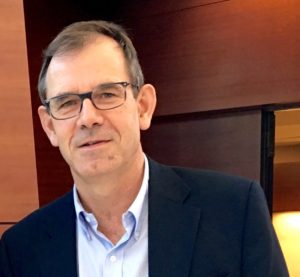 The University of Georgia has added to its impressive roster of Georgia Research Alliance Eminent Scholars, as renowned chemist David Crich joined the faculty this fall with a joint appointment in the department of pharmaceutical and biomedical sciences in the College of Pharmacy and the department of chemistry in the Franklin College of Arts and Sciences. Crich, the winner of major prizes in organic and carbohydrate chemistry, also is affiliated with UGA’s Complex Carbohydrate Research Center.

GRA Eminent Scholars are acknowledged leaders in areas of science that are strategically important to the state of Georgia and its research universities. Crich, whose full title is Georgia Research Alliance and David Chu Eminent Scholar in Drug Design, is the seventh Eminent Scholar recruited to UGA since 2015 and the 19th to date.

“I am delighted that Dr. Crich has joined the University of Georgia, and I look forward to his contributions to our research enterprise and entrepreneurial endeavors,” said President Jere W. Morehead. “He will build important connections among disciplines on our campus and advance our efforts to find solutions to scientific and health-related challenges facing our world.”

Crich, a synthetic chemist who specializes in carbohydrate chemistry, is the former Schaap Professor of Organic Chemistry at Wayne State University, where he led a group working in the areas of glycochemistry, organic reactivity and antibiotic chemistry.

“Moving to the University of Georgia allows me to take up all kinds of new challenges,” Crich said. “Together with my coworkers, I’ve moved from an environment where I was surrounded by other organic chemists to a place where I’m surrounded by people who are much more biomedically oriented. It’s a great match and gives me the chance to challenge myself and evolve.”

Crich has made a number of seminal contributions to organic and carbohydrate chemistry, including reaction mechanisms and methods, as well as contributing significantly to the fields of free radical chemistry and peptide synthesis. He has published more than 350 papers in areas as diverse as the total synthesis of alkaloids, the catalysis of radical reactions, and improved methods for peptide synthesis.

His major emphasis in recent years, however, has been on the development of new glycosylation methods, and he is especially well known for his seminal contributions to the elucidation of the principles of reactivity and selectivity.

In addition to his position at Wayne State, Crich served as director of the Institut de Chimie des Substances Naturelles, France’s largest state-run organic chemistry research institute at the time; Liberal Arts and Sciences Distinguished Professor of Organic Chemistry at the University of Illinois at Chicago; and a lecturer in chemistry at University College London.

“Professor Crich brings to the University of Georgia an exemplary record of research and translating discoveries into innovations that have the potential to significantly enhance human health and well-being,” said S. Jack Hu, UGA’s senior vice president for academic affairs and provost. “His appointment as a GRA Eminent Scholar underscores this institution’s commitment to recruiting outstanding faculty members to our state.”

At UGA, Crich will continue his work in drug design, pursuing new aminoglycoside antibiotics for the treatment of ESKAPE pathogens, six bacterial pathogens commonly associated with multidrug resistance. He aims to expand into carbohydrate-based areas, developing glycomimetics—therapeutic agents that mimic carbohydrates—for use in drug design. He also plans to establish collaborations with researchers across campus who are working to address infectious diseases.

“If you’re trying to work in interdisciplinary science and have an impact, then the synergy provided by collaboration is essential,” Crich said. “That’s a very valuable part of this opportunity made possible by the Georgia Research Alliance and the University of Georgia.”

Crich also hopes to take advantage of UGA’s innovation ecosystem to pursue commercialization opportunities. In 2015, he and collaborators at the University of Zurich founded the biotech startup Juvabis AG to develop next-generation antibiotics for the treatment of multidrug-resistant infectious diseases. The company is taking a compound targeting multidrug-resistant Enterobacteriaceae and other Gram-
negative pathogens into phase 1 clinical trials in Europe later this year.

“GRA is pleased to welcome Dr. David Crich as the new Eminent Scholar in Drug Design at the University of Georgia,” said Russell Allen, president and CEO of the Georgia Research Alliance. “David is a world-class leader in carbohydrate chemistry, and his strengths in translating science into commercial opportunities make him an excellent collaborator for UGA as well as our member institutions.”

Ninety-one patents have been awarded based on research from UGA’s GRA Eminent Scholars, who generated $222.5 million in sponsored research funding from 2014 to 2018.

“These scientists are among the brightest minds in their fields. Quite often, startup companies are born based on their work, which drives even more investment into our state’s economy,” said Vice President for Research David Lee.