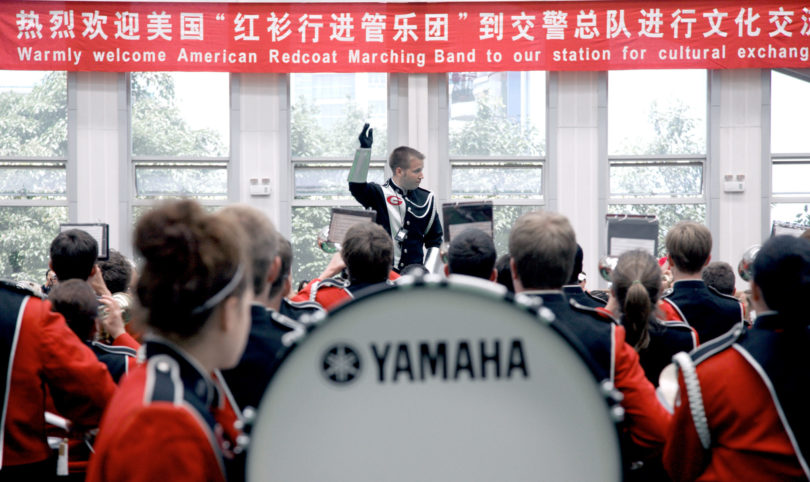 Drum major Dave Hanson leads the band in Kunming at an exchange with the Kunming Police Band.

The freshman from Watkinsville had stood in formation with UGA’s Redcoat Band many times before, but this time she and her trumpet were in a sold-out soccer stadium in Chengdu, China-a city of more than five million people located more than a thousand miles southwest of Beijing-as part of the first American college band ever to give a marching performance in a Chinese stadium.

As the 90-minute show ended, thrilled audience members, treating the band as rock stars, followed as the Redcoats marched a victory lap around the stadium’s track. Once outside, the crowd mobbed the UGA students for autographs and photographs.

“It was astounding,” Shelnutt said. “I let a little girl named Angel hold my trumpet for a picture. Hearing her gasp as I placed it in her hands is a memory I will always cherish. I let several teenagers try on my shako (uniform hat).

An old man walked up to me and told me I was his hero, and slid a black tiger’s eye bracelet on my arm. I was so shocked and honored that I almost forgot to thank him.”

During the Redcoats’ tour of China from May 14-29-dubbed by Chinese promoters as “the largest performing arts act ever to tour China”-the 298 students and 15 band and university staff members traveled more than 5,000 miles in-country, crisscrossing China from Beijing in the northeast to Kunming near the Vietnam border, then up to Chengdu in the central Sichuan Province, to Xiamen on the southeast coast and finally north to Nanjing and Shanghai.

A chance meeting at a music educators’ conference between band director David Romines and Song Yang of the U.S.-China Cultural and Educational Foundation led to the historic trip. Song knew the Redcoats had earned the prestigious Sudler Trophy as one of America’s top marching bands, and his organization ultimately raised $1.2 million to support the trip with transportation, meals and housing within China. Each Redcoat traveler paid an additional $1,600, which covered round-trip airfare.

The trip was an official, albeit non-traditional, UGA study abroad program. The university already is one of the nation’s leaders in study abroad-21 percent of undergraduates have a residential study abroad experience before they graduate -and the Redcoats are believed to be the largest group ever sent abroad by UGA for any purpose.

The tour itself was big news. In Chengdu, Kunming and Shanghai, local television broadcast the nearly two-hour performances live and without interruption, using sophisticated 10-camera shoots rivaling any Georgia Bulldog football broadcast. In each city, the Redcoats found themselves on the front pages of the local newspapers.

As was the case throughout the tour, closing night in Shanghai saw the audience at first curious about how to approach a marching band performance. The biggest reaction came when the band played a set of Chinese folk songs and formed a map of China that transformed into a map of the U.S. as the Redcoats broke into “Stars and Stripes Forever.”

“It doesn’t take much to change China into the United States,” Romines said of the formation. “You just adjust the west a bit and then add Florida.”

But the change in the individual Redcoats is more profound. “It’s a life-changing experience for each of them,” he said. “You can see them being changed.”