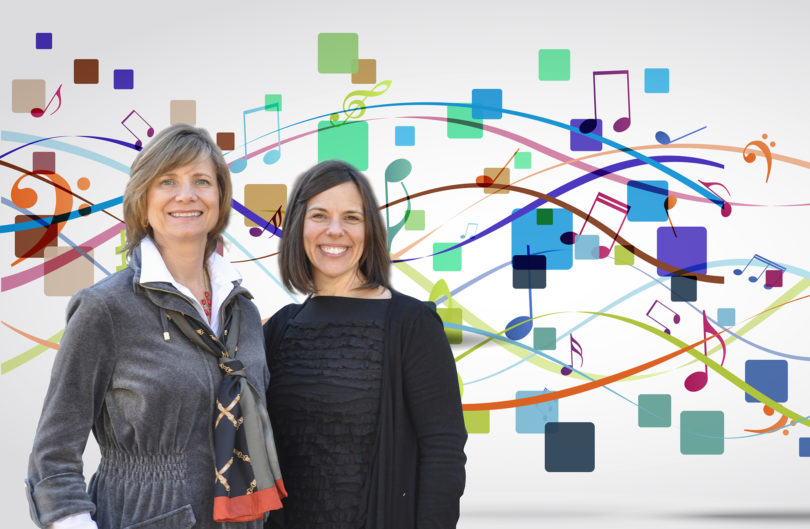 Connie Frigo, an assistant professor of saxophone in the Franklin College of Arts and Sciences’ Hugh Hodgson School of Music, and Laura Katz, a business consultant with the Small Business Development Center, a unit of the Office of Public Service and Outreach, met on the 2013 tour.

One year later, Frigo and two of her music department colleagues launched “Music in the Real World,” a course on professional strategies for music majors. Frigo then contacted Katz and invited her as a guest lecturer on marketing and sales. The course filled quickly with undergraduate and graduate students.

‘Beneficial for students’
Frigo already had been exploring ways to introduce her students to key business concepts when she met Katz on the five-day tour during the week before the fall 2013 semester began. The two began talking about changes to the traditional music industry and the need for students to better understand the business, Katz said.

“We both thought it would be beneficial for the students to have this type of information to better prepare them for the real world they would be entering upon graduation,” she said.

About 40 faculty, who have been at UGA for two years or less, make the annual five-day trip, which in recent years has included stops at Jaemor Farms, an agritourism destination near Gainesville, the Kia Motors Manufacturing plant in West Point, the CSX rail yard in Waycross and the UGA Marine Extension Service in Savannah.

‘Collective expertise’
Following the 2014 tour, Hilary Hughes, an assistant professor of educational theory and practice in the College of Education, Henry N. Young, the Kroger Associate Professor in the College of Pharmacy, and María E. Len-Ríos, an associate professor of public relations in the Grady College of Journalism and Mass Communication, began talking about collaborating on a project that would focus on health communication and the well-being of adolescents.

Together, they are seeking grants to research how 13- to 15-year-olds use social media in their lives and how that influences their health and well-being. They plan to study the psychological and behavioral patterns of this age group and develop workshops and media and health literacy programs that will contribute to their future health and welfare.

“This is a great opportunity to stay connected to our own research agendas while simultaneously drawing on our collective expertise,” Hughes said.

Scholarly accountability
Some collaborations that evolved during the annual tour have continued for years. Three faculty members in different departments of the College of Education-Stephanie Jones, a professor in the educational theory and practice department, Corey Johnson, a professor and program chair of the lifelong education, administration and policy department, and Anneliese Singh, an associate professor of counseling and human development-met during the 2007 tour, the last before UGA temporarily suspended the event due to state budget cuts. The three soon realized they shared a similar interest in feminist research methods. Once back on campus, they formed a writing group to provide each other critical feedback on manuscripts, grant submissions and, later, promotion and tenure materials. The three have met every six weeks for the past seven years.

“We have held one another accountable for rigorous writing and submission goals,” Jones said. “This has resulted in very high levels of production and quality in our scholarship including many books, top-tier journal articles, editorships, keynote presentations and awards. We all believe that our writing group has been the key to our successful writing trajectories, as we have become trusted colleagues and friends who support one another well beyond the sphere of writing.”

Organized by the Office of Public Service and Outreach with support from UGA President Jere W. Morehead, Provost and Senior Vice President for Academic Affairs Pamela Whitten and the UGA Alumni Association, the tour is an opportunity to familiarize newcomers to UGA with the state’s resources, culture and people. During the tour, faculty are encouraged to look for ways to use their research and expertise to benefit the state.