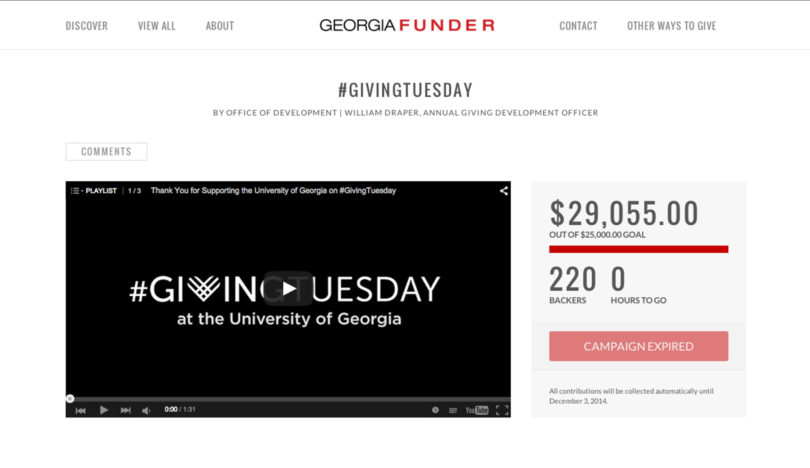 The University of Georgia recently launched a new crowdfunding platform called the GeorgiaFunder. On #GivingTuesday

Athens, Ga. – The University of Georgia recently launched a new crowdfunding platform called the GeorgiaFunder, which aims to raise relatively small donations from a large group of people to directly benefit UGA programs and organizations.

The pilot crowdfunding initiative exceeded its goals on #GivingTuesday, a national day of philanthropy Dec. 2., by raising more than $29,000 from 220 donors. The effort exceeded the day’s goal of $25,000 and more than doubled last year’s amount. Gifts will benefit university-wide initiatives, school or college support funds or other specific interests.

The GeorgiaFunder is modeled after other Web-based commercial services such as Kickstarter and Indiegogo. These initiatives rely on social networks and can spread quickly through social media, e-mail, websites and other grassroots forms of communications.

“Innovative fundraising initiatives like these energize our supporters,” said David Jones, executive director of annual giving and constituent development. “It is an interactive way to unite the university that really makes a difference not just financially, but by instilling a sense of community and pride.”

Donors included proud parents, grateful alumni, families continuing legacies and friends of the university who appreciate what UGA is doing in their communities.

“In addition to the unparalleled education and experiences that I received at UGA, I was also the recipient of a few scholarships. It is an amazing and priceless feeling to receive a scholarship as a student, and I deeply wish to give other students a chance to witness this feeling,” wrote one donor when making a gift online.

With GeorgiaFunder, faculty, staff and students can initiate approved campaigns to raise money for official UGA causes. Funds go to the project whether the project reaches its goal or not.

Other current projects will allow students to study abroad or fund research to eradicate a degenerative equine disease, among many other specialized funding opportunities.