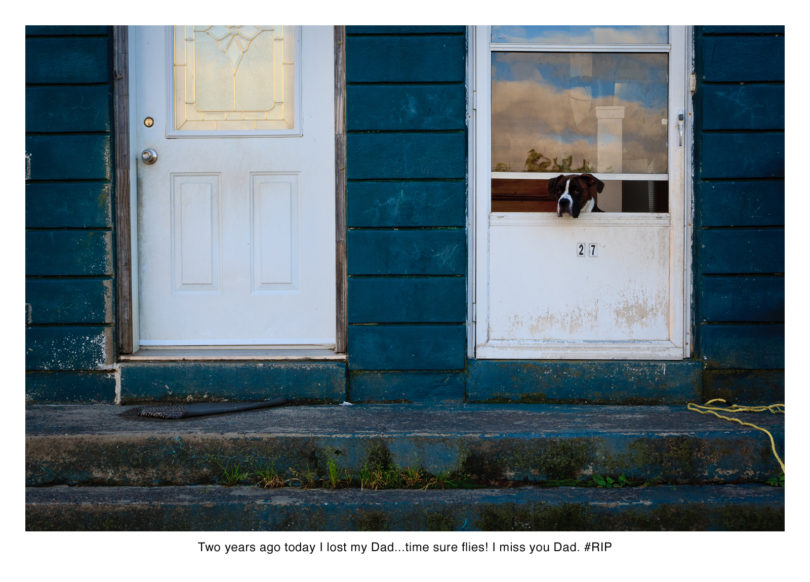 The tweet that prompted this "Lost my dad" photo in 2012 for the "Geolocation" project by Marni Shindelman and Nate Larson was "Two years ago today I lost my Dad...time sure flies! I miss you Dad. #RIP."

Athens, Ga. – A national exhibition at the Crystal Bridges Museum of American Art in Bentonville, Arkansas, is highlighting the work of two alumni and one faculty member from the University of Georgia’s Lamar Dodd School of Art.

“State of the Art : Discovering American Art Now,” on view through Jan. 19, features more than 100 American artists selected as the result of over 1,000 studio visits by Crystal Bridges curators who traveled the country seeking to discover artists whose work had not yet been recognized nationally.

“The process began last September with an email from Crystal Bridges requesting a studio visit with me in Atlanta the following week,” said UGA’s Marni Shindelman, a photography lecturer in the school of art. Her “Geolocation” series was chosen for the exhibition.

“We talked for over an hour about the series and some of my other work,” she said. “It is really exciting to be included as part of a survey of new American contemporary art.”

“Geolocation” by Shindelman and Nate Larson of the Maryland Institute College of Art combines GPS information in Twitter with photography to focus on the cultural understanding of distance as perceived in modern life and network culture. The duo uses commercial applications for the iPhone to pinpoint locations of messages sent on Twitter, then they photograph the location.

Alligood is a native of Perry who earned a bachelor’s degree in history of art and architecture from Harvard University and a master’s degree in art history from UGA and is completing his doctoral coursework at City University of New York.

“A large national exhibition featuring 100 prominent working American artists today provides a terrific survey of the creativity and inventiveness from across the country,” said Chris Garvin, director of the Lamar Dodd School of Art. “To have three artists and one curator affiliated with UGA as part of this exhibition is a great distinction that places us at the forefront of artistic practice in the United States.”

The Crystal Bridges Museum of American Art was founded by Wal-Mart heir Alice Walton and designed by Moshe Safdie. It officially opened in 2011. For more on the State of the Art exhibition, see http://stateoftheart.crystalbridges.org/.

For more on the Lamar Dodd School of Art, see http://art.uga.edu/.