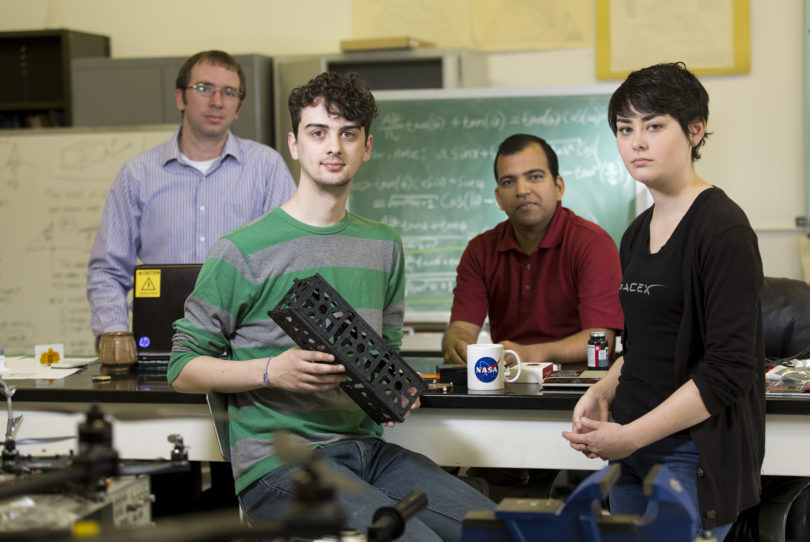 Two small CubeSats to be deployed from International Space Station

Athens, Ga. – A University of Georgia project led by a team of undergraduate students and including faculty from the Franklin College of Arts and Sciences and the College of Engineering was recently selected for funding by NASA’s CubeSat Launch Initiative.

The UGA proposal, “CubeSat for GA Water Resources,” to NASA’s Undergraduate Student Instrument Project will receive $200,000 in funding to prepare for a launch date 18 months from the project start date this month.

The spectrographic observatory of coastal regions, or SPOC satellite playfully known as DAWGSat, will be designed to perform the first moderate resolution multispectral analysis of vegetation health, ocean productivity, near-coastal sediment, organic matter and production of shelf waters and salt marshes from low Earth orbit, in this case an altitude of 400 kilometers.

A second CubeSat project also won $200,000 in funding—one of 10 selected by the U.S. Air Force Research Laboratory—to build the mapping and ocean color imager, or MOCI, to perform a photogrammetric analysis, known as “structure-from-motion,” in low Earth orbit to generate 3-D point clouds of broad scale structures on the Earth’s surface.

The UGA proposal to NASA was one of 43 selected for funding by its Office of Education and the Science Mission Directorate. The student-faculty collaboration will support the Small Satellite Research Laboratory to build both cube satellites.

“It’s two parallel ideas running at the same time—one from the students’ side and one from the faculty side,” said the project’s principal investigator Deepak Mishra, associate professor in the Center for Geospatial Research in the geography department.

UGA undergraduate students were planning to kick-start their own CubeSat for $10,000 until they realized that they could join forces with the university’s faculty and do something even better.

“Everyone was really excited when we realized this. The students had the manpower and motivation to actually build the craft, but we had absolutely no idea what it was going to do,” said Caleb Adams of Powder Springs, an astrophysics and computer science double major and chief manager of the satellite research lab.

“We have a very diverse team—engineering, physics, computer science, mathematics—and all of the puzzle pieces clicked in a really perfect way.”

“It’s been an amazing and humbling experience to be able to work with everyone on the team and to be a part of this project,” said Le Corre, mechanical team lead and a fourth-year student from Peachtree City. “It’s really exciting to see how much we’ve done in such a short amount of time and to imagine how much further we’ll be in just a few more months.”

UGA connections to NASA are through Marshall Shepherd, the UGA Athletic Association Distinguished Professor of Geography and Atmospheric Sciences and a former NASA research scientist. He had been interacting with former astronaut Mary Cleave to bring a NASA-funded CubeSat to UGA.

Other members of the faculty team—including Marguerite Madden, a professor of geography and director of the UGA Center for Geospatial Research; Sergio Bernardes, associate director of the UGA Center for Geospatial Research and formerly a researcher at NASA; Susanne Ullrich, associate professor of physics; Malcolm Adams, Meigs Distinguished Teaching Professor and head of the department of mathematics; Adrian Burd, associate professor in the department of marine sciences; and Roger Hunter, mathematics alumnus and current small spacecraft lead for the NASA Ames Research Center—all encouraged the development of space-based research collaborations.

“Roger had been telling us about the small satellite programs for a couple of years and encouraging UGA to be involved,” said Malcolm Adams. “Last year I met this group of faculty in geography that had already developed a CubeSat project through interactions with a few NASA colleagues. Shortly thereafter we discovered this group of students who were really engaged in the idea of building a CubeSat. Everything seemed to click and here we are. With the many UGA connections to NASA, it seemed like we had all the component parts to start a program.”

The student-faculty team met weekly, and the undergraduate team developed both proposals by piecing together ideas discussed in the meetings.

“It was an intensive exercise and we got a lot out of that process,” said Neel, a third-year student from Chickamauga.

“The functionality idea is to allow a small satellite to perform like a large satellite, a commercial satellite or a satellite that would be built by NASA,” Bernardes said. “It reflects the direction of the remote sensing community more broadly, toward more cost-efficient technologies that still allow us to have images covering the entire planet daily.”

The Small Satellite Research Lab will be the first space program at UGA.

“The opportunity for students to design, test and build a satellite system is very unique, one that few universities offer. I think the implications will be far reaching for UGA,” said David Cotten, a research scientist at the Center for Geospatial Research in the geography department and supervisor of SSRL.

“UGA has no space program, and ours was among the few proposals accepted from a university without a space or aerospace program,” Caleb Adams said. “We want to build a future in low Earth orbit and space for UGA.”

One route to that goal is building a space-rated ground station at the university, a facility at very few universities, but one that would allow for communication between campus and objects in low Earth orbit.

For now, the Small Satellite Research Lab work is taking place in the physics building.

“One of the really nice things with the NASA component of this is that the students get to go to NASA, so a lot of vibration testing and heat testing will be done in partnership with NASA,” Burd said. “The students get to go and work with those scientists, engineers and their equipment.”

The faculty team members put the success of the UGA CubeSat program thus far squarely on the shoulders of the undergraduate student team.

“What this team of talented and enthusiastic students is doing shows us a pathway for what we can be doing here at UGA in 10 years time,” Burd said. “By then we could have
a well-developed, cutting-edge small satellite development program involving students and faculty in the design and development of novel technologies and uses for these
satellites.”

“The university has shown tremendous support for the projects,” Mishra said.

The Small Satellite Research Lab has received pledged financial support from President’s Venture Fund, Office of the Vice President for Research, Center for Undergraduate Research Opportunities, UGA College of Engineering, Georgia Sea Grant and the departments of physics and astronomy, mathematics and geography.

A full list of the student and faculty team members, as well as more information on each of the projects, is available at http://www.smallsat.uga.edu.

To raise additional funding for the Small Satellite Research Lab, a UGA crowdfunding project has been launched at https://dar.uga.edu/funder/campaigns/uga-small-satellite-research-laboratory-help-us-go-to-space/.