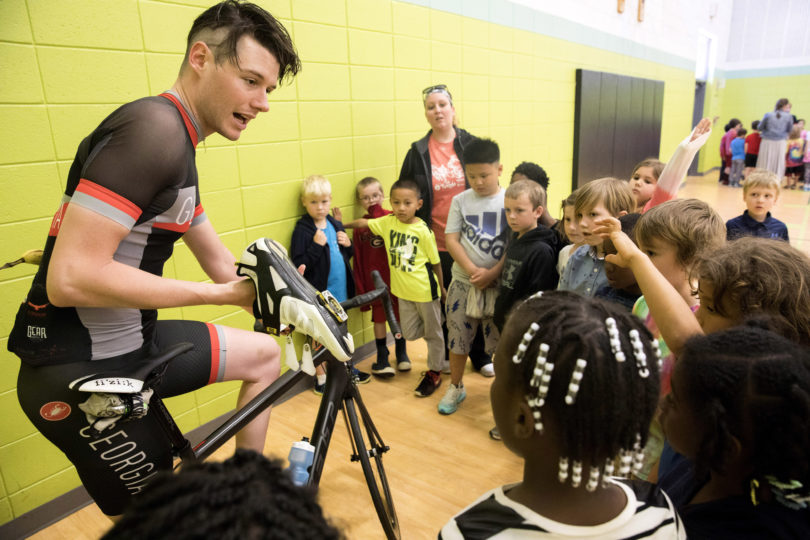 UGA cycling team member Will Saunders answers questions about his bike shoes during a demonstration at Barrow Elementary School in Athens. (Photo by Dorothy Kozlowski/UGA)

In advance of the Twilight Criterium, the UGA student-cyclists receive an enthusiastic welcome.

Every spring, thousands of spectators head to the Classic City for the Athens Twilight Criterium (April 27-28), a weekend of events that culminates in an 80K bicycle race in downtown Athens. It’s the perfect opportunity for UGA students to connect with the Athens community.

In the weeks leading up to the event, the UGA cycling team visits elementary schools for Helmet Talks, a presentation that teaches good nutrition, bike safety and the importance of helmets. This year, the team visited eight schools across Clarke, Oconee and Madison counties.

For years, the UGA cycling team, a club sport team comprised of 20 students, has ridden into schools in full uniform for the Helmet Talks, all at the awe of elementary students.

“We roll into these gyms and the kids think we’re superheroes,” said Grace Anne Ingham, a sophomore from Madison, Wisconsin, acting secretary and cyclist of the UGA cycling team. “We bring the different kind of bikes, wear full uniforms, the whole nine yards.” 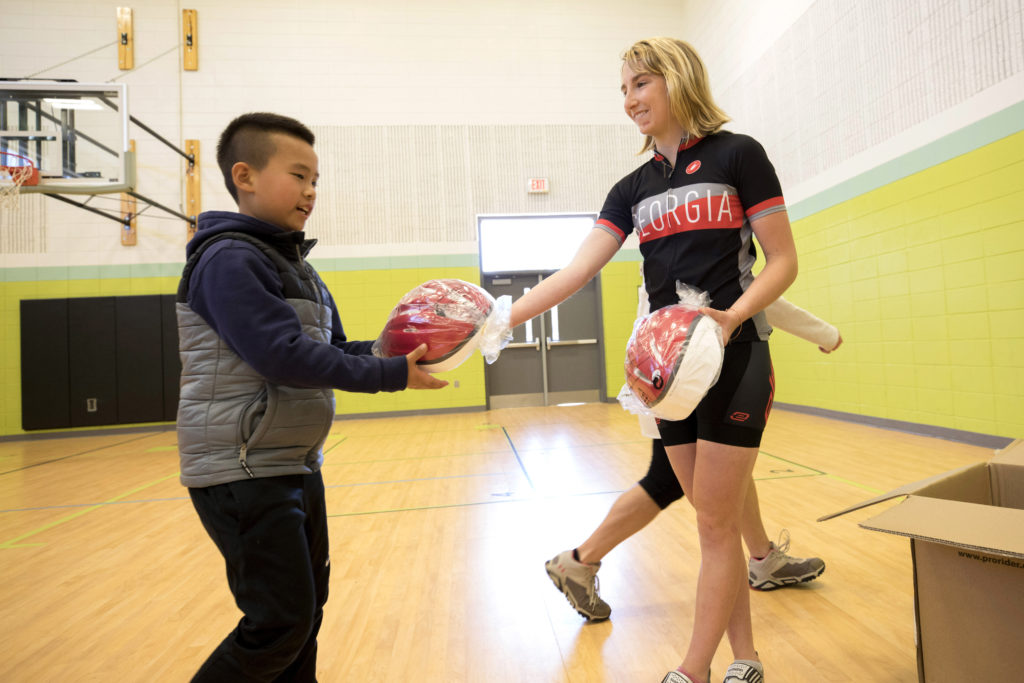 But the program is more than a way to impress kids; it’s a way to teach.

Helmet Talks include a Q&A session moderated by a Twilight staff member, explaining to kids the importance of bike safety and nutrition choices. Riders display their equipment, showing the kids that helmets are worn by each member of the team when they ride. The cyclists also teach the proper way to wear a helmet by putting theirs on incorrectly and inviting kids up to fix the mistakes, drawing eager volunteers from the crowd and laughter from their classmates.

“I know it’s common for kids not to wear helmets when biking, so we really try to stress the importance of that,” Ingham said. “I think the most important thing for kids to take away from the experience is that the pros wear helmets, so they should too.”

To further encourage the students to wear helmets, Twilight’s sponsor, the Mulherin Foundation, donates helmets to be given out after the Helmet Talk. More than 780 helmets were given out this year.

In addition to helmet safety, riders explain what they eat before and after races, and how they stay hydrated through the races. The program ends with the cyclists giving demos on their bikes that are met with cheers and claps from the elementary schoolers. 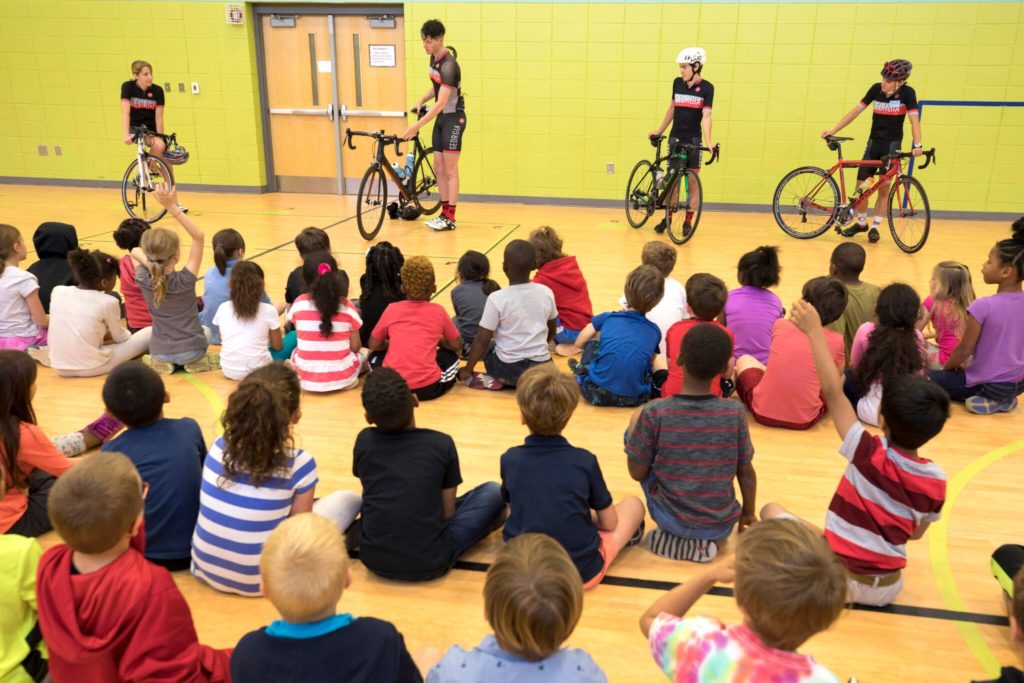 The UGA cycling team visited elementary schools for Helmet Talks, a presentation that teaches good nutrition, bike safety and the importance of helmets. This year, the team visited eight schools across Clarke, Oconee and Madison counties.

“The kids ask me every year about this event,” said Christy Burnett, health teacher at Barrow Elementary. “The UGA students are big role models to our kids. The kids get excited when they see them and aspire to be like them one day.”

For Ingham and the cycling team, this is just one way they repay the Athens community for their support. 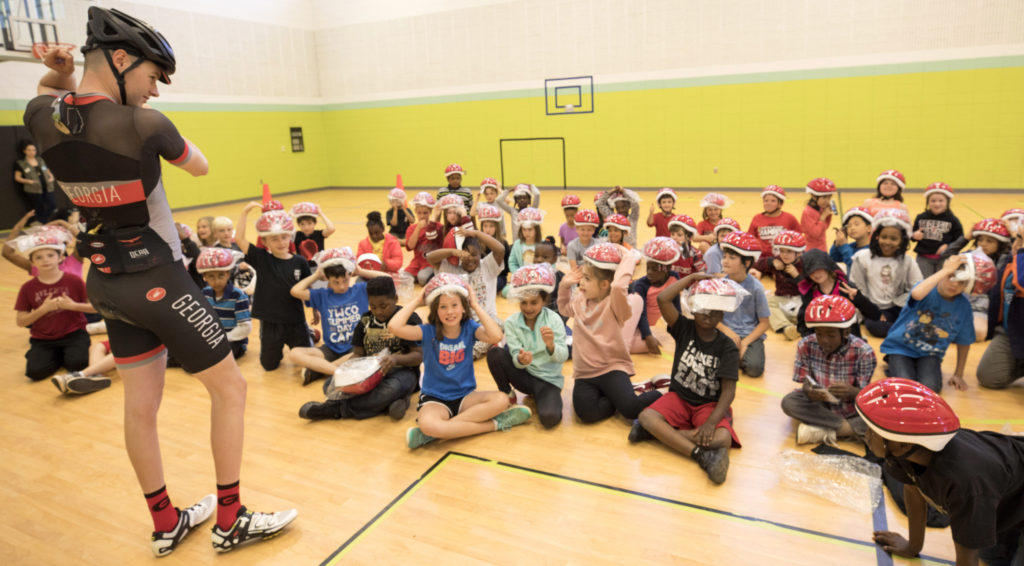