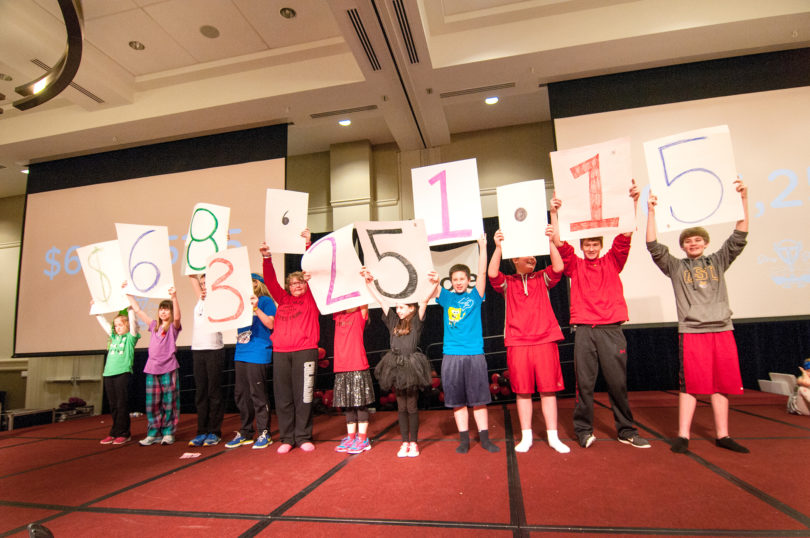 Dance Marathon, now a touchstone in the on-campus experience of many UGA students, has served as the annual culminating fundraising event for the student-run philanthropic organization, UGA Miracle, for two decades. During the event, students give up an entire day in a symbolic gesture in support of children combating illness in hospitals. Over the course of 24 hours, the students, joined by current and former Children’s Healthcare patients have a marathon dance session that includes live music, talent shows and special messages from the families whose lives they impact with their support.

“The University of Georgia is incredibly proud of these students,” said Victor K. Wilson, vice president for student affairs. “Our students do so much to support the university and local communities, and we appreciate their impressive efforts to make such a positive impact.”

For this year’s event, student leaders set a goal to raise $610,000, a nearly 20 percent increase over 2014’s record-setting total of $507,203. For the reveal, children lined up across the stage, each holding a large square card with a number written on the back. The entire room’s focus was on the stage as each child held his or her number up. When the last child on the left held the six high in the air, the entire room burst into cheers and tears-they had surpassed their goal by more than 12 percent.

“I’m going to let you guys in on a little secret,” said Ryan Garrahan, executive director of UGA Miracle. “That first number didn’t change to a five until Friday. The people in this room raised more than $100,000 in the past day!”

Other student organizations get in on the act, as well. Members of the Greek organization Phi Mu raised nearly $144,000 themselves.

While UGA Miracle is known mainly for its signature event, Dance Marathon is actually the final event of a year-long series that contributed to the final total, including a Chase Rice concert, Philanthropy Phormal, the Krispy Kreme Doughnut Dare 5k and more. One event, “$100 Day,” also made history when the group raised $68,000 in just 24 hours, crushing their initial goal of $30,000.

Garrahan, an advertising major from Versailles, Kentucky set to graduate this spring, said UGA Miracle is a good example of the importance of the total learning experience for students.

“You come to UGA for a great education, sure,” he said. “But this is the kind of thing you can’t get in the classroom. We’re making a difference. We’re coming together to impact lives. I’ll carry the memories and lessons from this weekend with me for the rest of my life.”