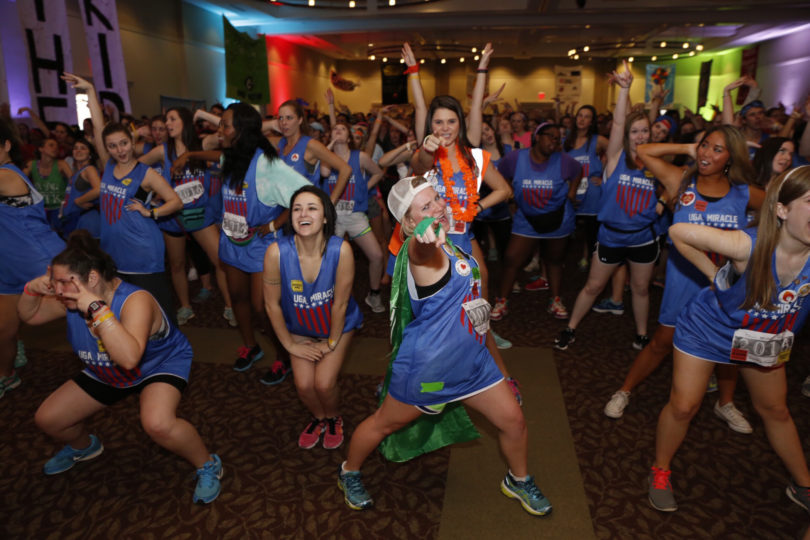 Athens, Ga. – More than 2,100 University of Georgia students caught up on some much needed sleep Sunday after 24 hours of dancing and games culminated in the announcement of a record-setting $1,068,358.16 raised for Children’s Healthcare of Atlanta.

From 10 a.m. on Feb. 20 to 10 a.m. the following morning, students, faculty and staff filled all three levels of the Tate Student Center, dancing, playing games and sharing stories. In one location, students could participate in a silent disco, where a DJ pumped music to participants’ headphones, creating an amusing scene for onlookers of Athens’ quietest dance club. In another, students joined Children’s Healthcare patients and their families for inflatable slides, obstacle courses and opportunities to meet the children that are the event’s focus.

For 21 years, Dance Marathon has served as the annual fundraising finale for the university’s largest student-run philanthropy, UGA Miracle. The 24-hour event is a symbolic gesture in support of children who have had to sacrifice much more of their own time to combat illness in hospitals. Since its inception, the student organization has raised nearly $6 million for Children’s Healthcare, with more than $2 million of that total coming in the last three years.

The theme of this year’s campaign was “Together One Nation,” which morphed to “Together One Million” to promote the organization’s ambitious fundraising goal of $1 million. By setting the unprecedented goal, Izabella Zucker, UGA Miracle’s executive director, explained that the students wanted to “shatter expectations” of what people think college students are capable of.

“There is no greater example than Dance Marathon of what happens when college students who are passionate come together and unify for a common cause,” said Zucker. “When we do that, the sky is the limit.”

UGA Miracle offered several events throughout the past year, including a Michael Ray concert at the Georgia Theater in downtown Athens, the annual Doughnut Dare 5K and a $100 day, which raised more than $215,000 in a single day.

“UGA has the most amazing students,” Wilson said. “Seeing the impact they’re able to make on our communities now-just imagine the good they can do after graduation for years to come. The future looks to be in excellent hands.”

Zucker, a public relations and international affairs double-major from Johns Creek, thinks there is a large philanthropic movement among her generation.

“We’re really lucky to have that environment at UGA, of students wanting to give back,” she said. “Every student has a different reason, but I think it’s just fulfilling. You can see the families at Children’s, and that equipment that they’re using is funded by us. It’s not just some far-off fund – you can literally see your impact right in front of you.”