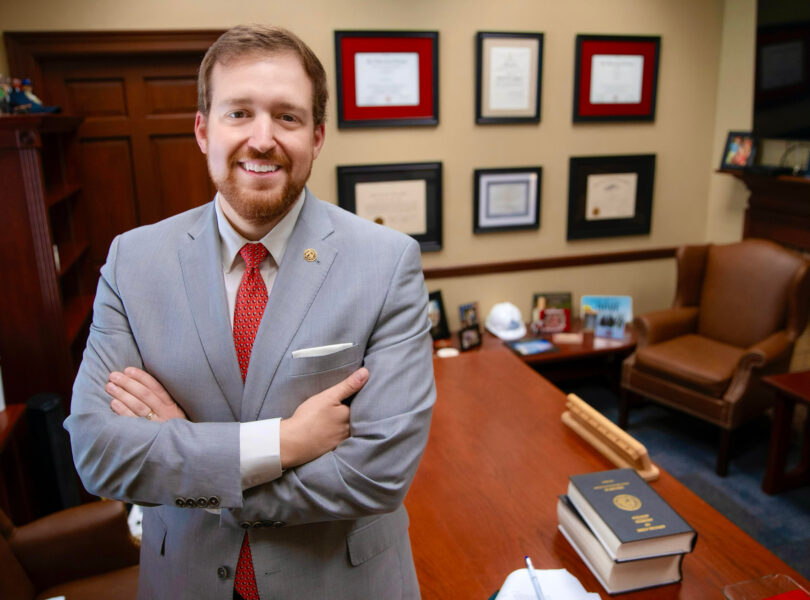 As executive counsel for Gov. Brian Kemp, David Dove AB '09, JD '14 is the one of the most trusted advisers for Georgia's chief executive. Their relationship began when Dove served on Kemp's staff when he was Secretary of State.

David Dove AB ’09, JD ’14 was in high school when he was first drawn to the law. Although he earned a degree in political science, he had no aspirations for mixing the law with a career in politics. But that’s exactly what Dove does now as executive counsel for Georgia Gov. Brian Kemp BS ’87.

As the top in-house lawyer for the governor, Dove also oversees all appointments and ethics in the state’s executive branch, and his staff works side-by-side with agencies on rulemaking.

“A lot of this job is making sure the train runs on time,” says Dove. “I tell people our scale of tasks goes from important to significant to critical.”

The quick decision-making that’s necessary for his job requires Dove and his team to be on call 24/7, whether it’s a pandemic that needs attention or a funnel cloud approaching a small town.

“The governor has to be able to trust us so that he knows he has the best information, the best counsel available all the time,” Dove says. “So we strive to stay sharp.”

Dove’s current job was a natural transition from the positions he’s held since he graduated from UGA’s School of Law and left his hometown of Athens. After earning his undergraduate degree, Dove worked for Kemp while he was secretary of state and also worked for former Gov. Nathan Deal. It was Gov. Deal, a former lawyer himself, who encouraged Dove to pursue law school.

“It was really great to see his passion for the law,” says Dove. “Gov. Deal was a great mentor and encouraged me in that regard.”

Throughout his career in government, Dove has held a variety of roles ranging from handling campaign finances to serving as government affairs liaison. When Kemp was elected governor in 2018, Dove oversaw the transition.

As an attorney, Dove found a love for civil litigation while in law school at UGA, which he furthered with a stint in private practice, where he worked with other UGA law alumni. “What really appeals to me about being a lawyer is that whenever there’s a complex problem—whether that’s related to a person, a hospital, a company, or the state—we help people solve problems and improve their condition,” he says. “There’s never a boring day as a lawyer.”

Whether it’s a sticky situation or a difficult problem, Dove has learned the balancing act between speed and accuracy. While lawyers sometimes get a reputation for being risk-averse, Dove thrives on thinking through a challenge.

“My favorite part is taking the idea of where the governor wants to go and figuring out how we can do it,” says Dove. “You can always say no as a lawyer—that the risk is too great on this one facet—but I like to think creatively and look at it as a puzzle to solve.”