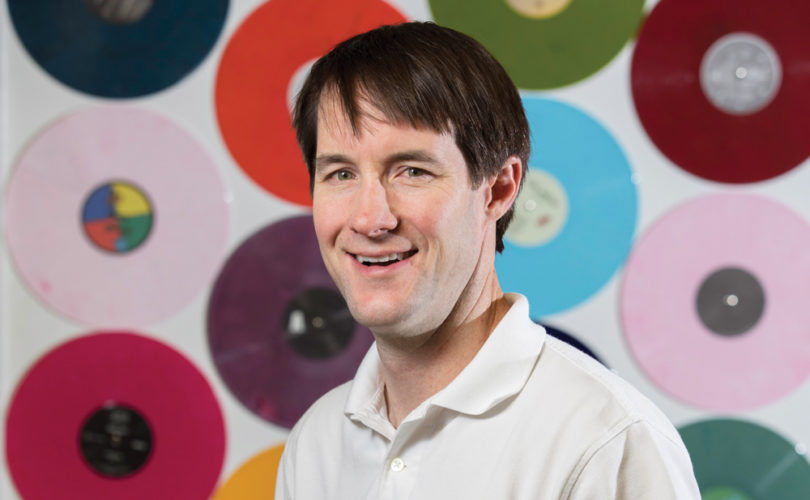 Davis Knox BBA '96 has experienced quite a bit of entrepreneurial success. Now he's working to help his fellow entrepreneurs grow their businesses across Athens. (Photo by Peter Frey/UGA)

As a UGA student, Knox BBA ’96 aspired to start or help start as many businesses as possible over his lifetime. Little did he realize that one of his startups would be a nonprofit dedicated to supporting others with that same entrepreneurial spirit—but more on that later.

As far as his business total: So far he’s at five, having worked for or started businesses that range from the simple (a fly fishing and bird hunting shop) to the complex (one adapted mobile technology to transform how airport’s coordinate wheelchair service).

Knox’s current business venture is Fire & Flavor, the Athens-based maker of trendsetting cooking products. Knox started the company with his wife, Gena BBA ’00, a food writer and cookbook author. Fire & Flavor began with Gena’s experiment developing a cedar plank for consumer grilling out of the couple’s garage. The planks caught on quickly with regional grocers, and the Knoxes have cultivated the business into a nationwide supplier of seasonings, brines, and charcoals that can be found on the shelves at Publix, Kroger, and Lowe’s among others.

It was when the Knoxes moved back to Athens in 2005 to expand the Fire & Flavor brand that Davis truly fell in love with the innovative culture of the Classic City’s entrepreneurs and creative professionals.

“There’s just a freedom of mind and spirit in this community that’s attractive for folks that tend to dabble and innovate,” he says.

While Fire & Flavor was thriving, Knox started on his next challenge, which was inspired by the creative possibilities in Athens.

With a group of entrepreneurial peers in 2015, he founded the nonprofit Athensmade, which works to support and promote Athens’ homegrown brands, entrepreneurs, and creative professionals. It represents entrepreneurs from a range of industries including art, tech startups, and consumer products (like handmade furniture, textiles, coffee, and chocolate).

The idea is to simultaneously spur collaboration and idea-sharing among Athens’ creative class while promoting Athens brands to external markets and luring entrepreneurs to the community.

The organization has also been collaborating with UGA to stimulate entrepreneurship and provide students with learning opportunities, including efforts to create best practices for creating experiential learning internships for students. And, Knox is on UGA’s presidential task force to create an innovation district in Athens.

Even with all of this momentum, Knox sees so much work to be done.

“I still view Athens as a blank canvas with a lot of really talented people holding the paint brush,” he says. “They just haven’t been invited to paint yet.”

In other words, this is just the beginning. Knox’s favorite part.