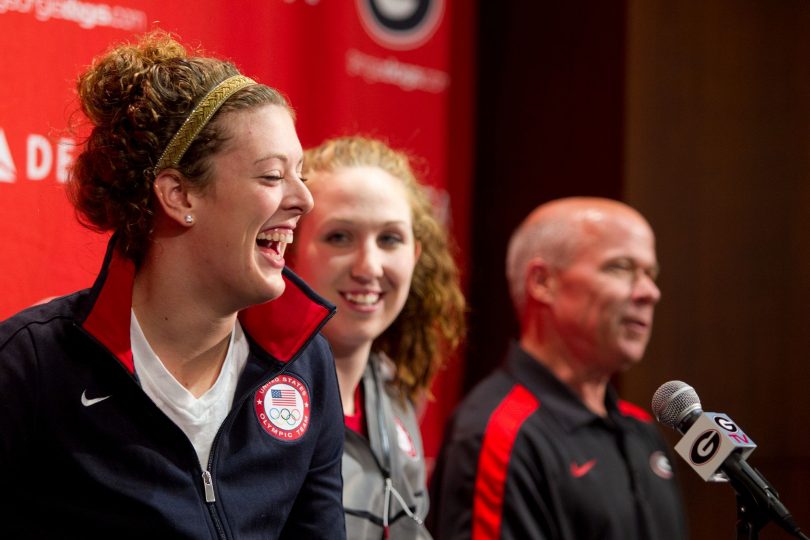 Former UGA swimmers and Olympic medalists Allison Schmitt (left) and Shannon Vreeland with Coach Jack Bauerle after the 2012 Olympics. The two Bulldogs won gold medals in London as part of the 4x200 meter freestyle relay team. Schmitt won a total of five medals in London, three of them gold. She's earned a total of eight Olympic medals over three games.

Georgia Bulldogs have a proven track record at the Olympics.

Editors note: This story originally appeared in Georgia Magazine’s Summer 2021 issue. Since then, 30 members of the Georgia athletic community have qualified to compete for 13 different nations in five sports at the Olympic and Paralympic games. This is the second-largest Georgia contingent in Olympic history, trailing only the Rio 2016 field (36).

The story has been updated to reflect these developments.

Every morning at 5:01, Allison Schmitt’s alarm goes off, pushing her out of bed and toward the pool in Tempe, Arizona.

Although Schmitt BS ’14 retired from swimming in 2016 to work on a Master of Social Work at Arizona State University, the drive to compete pulled her back. And while she’s heard the rumblings that she’s too old to be elite (she turns 31 in June), the doubts have only pushed her to work harder.

“I’ve taken the approach that age is a blessing,” she says. “I’m able to focus more and be more aware of the little things—not just my nutrition but recovery and connection with my stroke.”

Schmitt is one of more than two dozen former and current Bulldogs who will represent their nation at the Summer Olympics and Paralympics.

Dating back to 1936 when Forrest “Spec” Towns BSEd ’37 won gold in the 110-meter hurdle in Berlin, Germany, nearly 150 UGA athletes and coaches have qualified for the Olympics and Paralympics in about a dozen sports—mostly in track and field and in swimming and diving. But a fair number of athletes have come from other sports, such as equestrian and basketball (including four-time hoops gold medalist Teresa Edwards BSEd ’89).

UGA’s first Winter Olympics athlete was none other than Bulldog football legend Herschel Walker, who competed in bobsled in 1992.