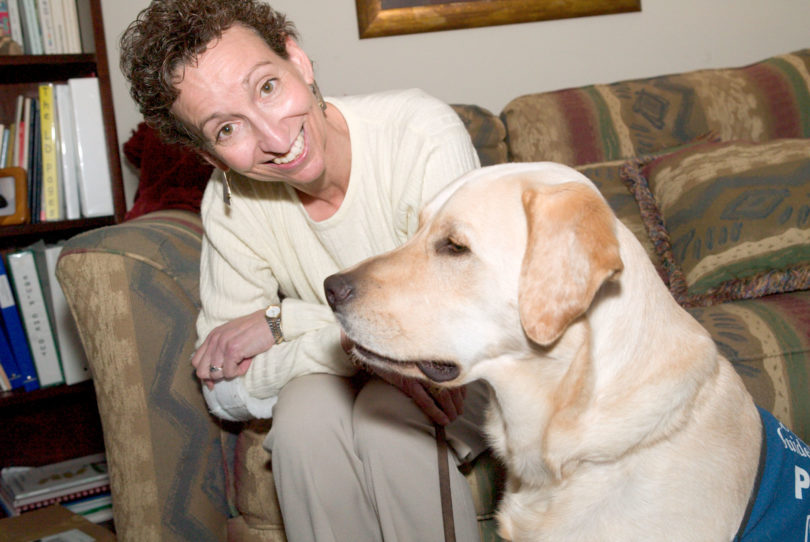 JOB DESCRIPTION: “I work with students who have disabilities by providing appropriate accommodations so that they enter the academic environment on a level playing field with other students. I also coordinate several support service areas, including services for students with hearing impairments, production of alternative text and the adaptive technology lab.”

YEARS IN CURRENT POSITION: “I have been in this department for 15 years. I started out as a disability specialist, and then over time I was asked to do more administrative work. About three or four years ago, I became assistant director.”

MOST REWARDING PART OF MY JOB: “Working with students, definitely. I love their energy, and it’s a privilege for me to be a part of their lives.”

PREVIOUS WORK EXPERIENCES: “I am a certified sign language interpreter, and I was an executive director of an arts organization called Stage Hands, which did performances in sign language. I was a teacher of the deaf as well.

“I got my bachelor’s in special education, with a focus on speech and hearing. I then went on to get a master’s in deaf education from the University of Arizona at Tucson.

“Later on, my husband, John Olive, got a job at UGA in the math education department. I was freelancing as an interpreter, but most of that work was in Atlanta, and it got to be too much to drive in all the time. I began searching for a new career, and read the book What Color Is Your Parachute? One of the suggestions was to interview people in jobs that were interesting, so I interviewed Karen Kalivoda, the director of UGA’s Disability Resource Center. About eight months later, she called me and offered to hire me on a temporary basis while a staff member was on maternity leave. I have been here ever since.”

IF I WASN’T DOING THIS JOB, I WOULD MOST LIKE TO: “Travel and be some kind of a tour guide, but I wouldn’t want to be in one city or one location all the time. I would want to lead walking tours in different places and would like to do something with dogs.”

OFF-THE-JOB INTERESTS: “I love to walk, I like to read, and I’ve just taken up knitting again. My sister got me involved with a charitable project where volunteers knit squares to be made into blankets, and the organization sends the sewn blankets to people who need them.

“Of course, I also love being a guide dog puppy raiser. Puppy raisers are volunteers who are responsible for teaching general obedience, about 50 specific commands and a lot of socialization.

“For the past two years, I have been training a guide dog candidate, Joe-a rather large but well-behaved ­Labrador-golden retriever that I received in March 2003-for ­Southeastern Guide Dogs, Inc. (http://www.guidedogs.org).

“Raising him and bringing him to work with me has been great because I’m doing something to assist a blind person who will be using him as a guide dog in the future. He’s been a great icebreaker for the students and for parents, and he’s been a great educator to others.

“Joe is now off at K9 College, during which they will evaluate him to see if he will be a suitable guide dog. If so, then he’ll undergo six months of intensive training with a harness. The next time I get to see him is at his graduation.

“Since I knew that Joe would be leaving soon for further training, I applied to raise another potential guide dog and received a puppy back in December. She’s a smooth-coat collie named Honey. Unfortunately, I won’t be able to bring her to the office with me. I’ll have to do her training in the evenings and on weekends, and during the days she will stay at home. It will be interesting to compare her success with Joe’s.”

THE PERSON I MOST ADMIRE: “My daughter, Jaime Olive, because she is an incredible individual. She’s 18 and is bright, creative, intuitive, and she has an enormous amount of potential. I love her dearly.”

THE ISSUE THAT CONCERNS ME MOST ABOUT TODAY’S WORLD: “The war we’re involved in and the lives we are losing every day.”