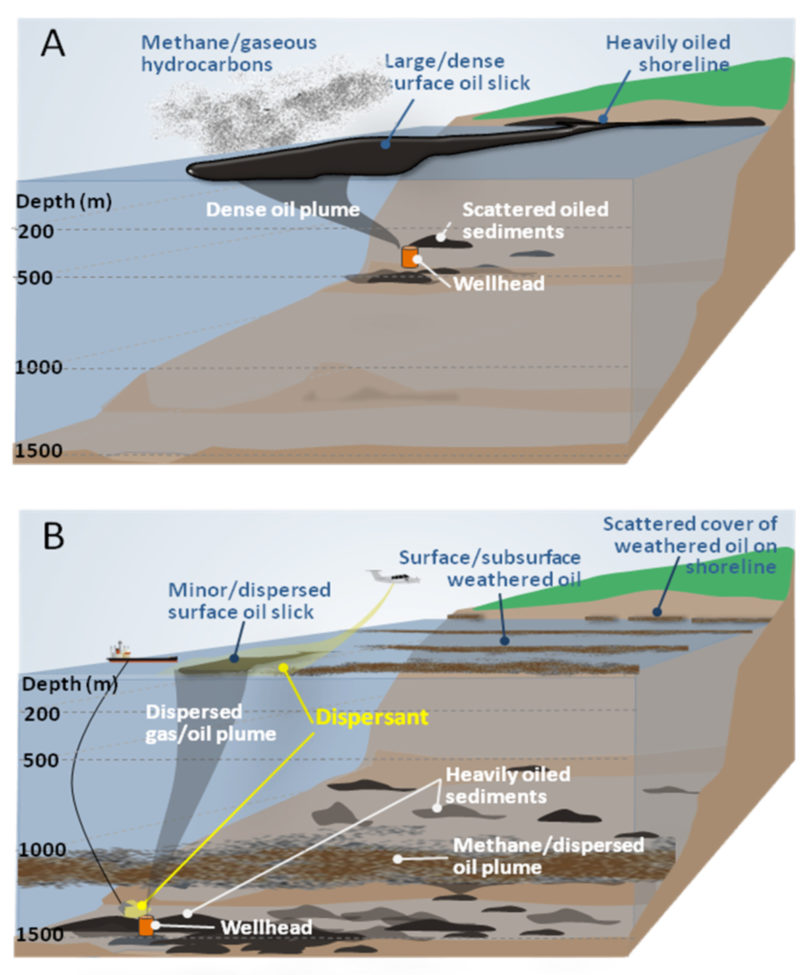 The figures above contrast (a) the traditional model for crude oil fate and effects that prevailed before the Deepwater Horizon blowout and (b) the newly emerging and still developing model of a deepwater blowout like the Deepwater Horizon. The models are by Peterson et. al and appeared in the May 2012 issue of BioScience.

Athens, Ga. – On the second anniversary of the Deepwater Horizon blowout, a national panel of researchers including University of Georgia marine scientist Samantha Joye is urging the federal government to reassess how it would respond to similar oil spills that might occur in the future.

The 22 researchers, whose paper was published April 20 in the peer-reviewed journal Bioscience, noted that the 2010 Deepwater Horizon oil spill was unlike any other oil spill encountered previously. Although the well blowout occurred at unprecedented depths and released enormous quantities of oil (an estimated 4.9 million barrels or 206 million gallons), the response to cleanup and contain the oil followed a framework that assumed the oil’s behavior would mimic previous shallow-water and surface spills.

In addition to creating a new model for understanding how deep water oil spills occur, the authors argue for an increase in immediately accessible research funding following oil spills so that society can be better prepared to respond to future spills, should they occur. They also noted that the requirement of the federal Natural Resource Damage Assessment Process that requires cooperative decision-making between the government and the responsible party and mutual approvals of research studies slows down the process and limits the scope of studies that are conducted.

“So many aspects of this oil spill were unique-that it was an offshore, deep-water blowout; that both methane and oil were released from the wellhead into the pelagic ocean; that dispersants were used at both the sea surface and sea floor,” said Joye, the Athletic Association Professor in the UGA Franklin College of Arts and Sciences. “Doing science in response to the spill was an incredible challenge, and what we learned during the response led us all to the new spill response model that is described in our paper.”

The authors noted that the lack of a model for understanding deep-water spills may have hindered initial work on this disaster and obscured understanding of what actually happened in the key early days. “The problem here is that scientific assessment would be faster and more thorough if this were a familiar type of spill,” said the study’s lead author, Charles “Pete” Peterson, a professor at University of North Carolina-Chapel Hill, who has been deeply involved in the study of Exxon Valdez environmental effects for more than two decades. “But this was a new type of spill. We now have a sense that the bulk of the impact was probably in the mid-water and deep ocean. Who the heck knows what oil does to the mid-water pelagic and deep-dwelling critters?”

To create their new model, a group of scientists convened under the auspices of the National Center for Ecological Analysis and Synthesis in 2010, while the spill was still active, to synthesize existing knowledge to anticipate the potential ecotoxicological effects of the spill. They highlighted major gaps in scientific understanding that must be addressed for society to successfully confront the modern oil spill in an age in which drilling has moved into deeper water.

“All our previous oil spill models were focused on the skin and the edge of the ocean. That was where everyone thought the action was, like it was for the Exxon Valdez,” said co-author Sean Anderson, an associate professor at California State University Channel Islands, “As the Deepwater Horizon spill unfolded, you would hear folks saying things like ‘we all know what happens when oil and water mix; the oil floats.’ That wasn’t the whole story. And that oversimplification initially sent us down an incorrect path full of assumptions and actions that were not the best possible use of our time and effort.”

This new model for how an oil spill unfolds and where the resulting ecological impacts accrue emphasizes that the vast majority of the oil is retained at depth and, among other response actions, calls into question the efficacy of dispersants. In the case of Deepwater Horizon, hot oil and natural gas erupted from the seabed and were rapidly mixed and dispersed due to the physics of the pressurized oil jetting from the tip of the wellbore.

“Much of that oil never got to the surface, or ever could have gotten to the surface, calling into question the value of dispersant use at depth,” argues co-leader Gary Cherr, director of the UC Davis Bodega Marine Lab. “We have generally hailed the use of [chemical] dispersants as helpful, but really are basing this on the fact we seemed to have kept oil from getting to the surface. The truth is much of this oil probably was staying at a depth independent of the amount of surfactants we dumped into the ocean. And we dumped a lot of dispersants into the ocean, all told approximately one-third the global supply.”

The authors argue that had their newly-proposed oil spill model been in use, responders would have proceeded in a different manner. And in those critical early weeks and months of the unfolding spill, the response effort could have focused greater attention on the ecological communities most in harm’s way.

As near shore, shallow-water oil reservoirs become depleted, the petroleum industry has transferred the focus of its marine exploration and production activities to deep (greater than
305 m) and ultra-deep (greater than 500 m) reservoirs similar to the one in which the Deepwater Horizon disaster occurred. Yet the Outer Continental Shelf Lands Act explicitly excluded the central and western Gulf of Mexico from the otherwise universal requirement to produce a development and production plan, which, the authors argue, effectively allows deep-water drilling to proceed without the need for a full assessment of risks.

“Our hope is that this paper brings attention to the fact that deep-water oil spill response efforts must be extensively revised so that we do not repeat the same mistakes and are better prepared to assess important ecological impacts from day one,” Joye said.