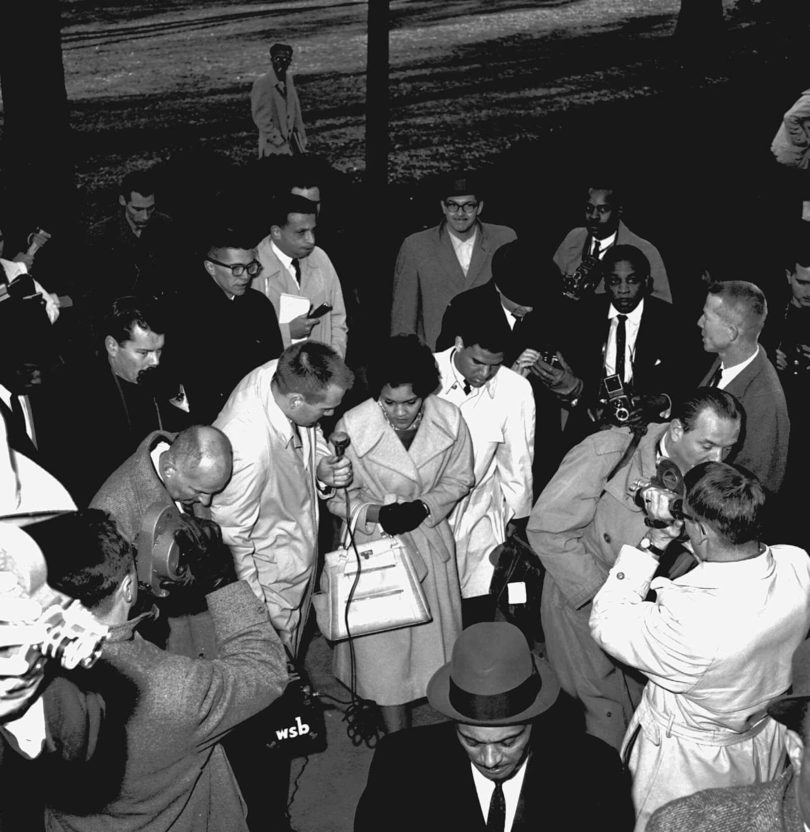 When Charlayne Hunter and Hamilton Holmes arrived on North Campus on Jan. 9

A brief history of the desegregation of the University of Georgia

The 1961 desegregation of the University of Georgia by Hamilton Holmes and Charlayne Hunter is considered a defining moment in civil rights history, leading to the desegregation of other institutions of higher education in Georgia and throughout the Deep South. When the two students walked onto North Campus on Jan. 9 to register for classes, the event marked the culmination of a legal battle that had begun a decade earlier when Horace Ward unsuccessfully sought admission to the law school.

The legal battle
Holmes and Hunter were represented by a legal team headed by Atlanta civil rights attorney Donald Hollowell and Constance Baker-Motley of the NAACP Legal Defense and Educational Fund. They were joined by Ward, who had earned his law degree at Northwestern University, and by Vernon Jordan, a young Atlantan who had just graduated from Howard University Law School.

Holmes and Hunter had both attended all-black Turner High School in Atlanta, where Holmes had been valedictorian, senior class president and co-captain of the football team. Hunter had finished third in her graduating class, had edited the school paper and had been crowned Miss Turner. Nevertheless, for a year and a half university officials gave a variety of reasons for denying their applications. While the court fight was being waged, the two students started their college careers at other institutions: Holmes at Morehouse and Hunter at integrated Wayne State University in Detroit.

On Jan. 6, 1961, federal judge William Bootle handed down his finding that “the two plaintiffs are fully qualified for immediate admission” and “would already have been admitted had it not been for their race and color.”

On Monday, Jan. 9, as the two students arrived on North Campus, they were met by a crowd of reporters and fellow students, the latter chanting “Two-four-six-eight! We don’t want to integrate!” Still, relative calm prevailed until the third evening after their arrival, when a mob of students descended on Myers Hall, where Hunter resided. The crowd hurled bricks and bottles before finally being dispersed by Athens police, who arrived with tear gas, and Dean of Men William Tate, who waded into the crowd demanding student IDs.

Later that night, Holmes and Hunter were escorted back to Atlanta by state troopers. They were informed by Dean of Students J. A. Williams that he was withdrawing them from UGA “in the interest of your personal safety and for the safety and welfare of more than 7,000 other students at the University of Georgia.” The riot and the suspension decision sparked an outcry, and more than 400 faculty members immediately signed a resolution calling for the return of Holmes and Hunter to campus. Within days, a new court order brought them back.

Legislative maneuvering
Meanwhile, state political leaders were doing some legislative maneuvering to keep UGA from being closed. In 1956, the Georgia General Assembly had passed a law forbidding coeducation of blacks and whites and cutting off state funds if schools were desegregated. Fortunately, Gov. Ernest Vandiver and key legislative leaders (all UGA alumni) decided that the school needed to remain open.

Holmes and Hunter were soon joined at UGA by another Turner High alum, Mary Frances Early, who transferred from the University of Michigan, where she was in graduate school. Early, who said she made the move to provide moral support to Holmes and Hunter, earned her master’s degree in music education in 1962, becoming UGA’s first African-American graduate.

Return to campus
Years passed before Holmes or Hunter returned to campus, but in 1979 Hunter came back to do a documentary on the evolution of race relations in Georgia since she had been a student. She visited again in 1981 to join the alumni board of the journalism school and to meet Herschel Walker. In 1988, 25 years after her own graduation, she was asked to give UGA’s Commencement address.

Holmes, meanwhile, agreed in 1981 to be involved in planning the university’s bicentennial celebration. Two years later, he accepted an appointment as a trustee for the UGA Foundation. In conjunction with the bicentennial, the Holmes-Hunter lectureship was established in 1985, and each year Holmes attended the lecture series with family members, including his son, Hamilton Holmes Jr., who earned a degree from UGA’s business school in 1990.

In 1992, Hunter (now Hunter-Gault) penned a memoir titled In My Place and returned for the annual lecture, delivered that year by Jesse Jackson. It was the last time she and Holmes appeared at UGA together. Holmes died in October 1995 at age 54. At his funeral, Hunter-Gault spoke movingly of their shared experience in desegregating the university, and, in a Washington Post column, remembered him as “one in a million.”

In 2001, UGA marked the 40th anniversary of desegregation by bringing back to campus many of the key figures from the 1960s including Hunter-Gault, Early, Hollowell, Ward, Baker-Motley and Vandiver, who offered an apology for campaigning for governor with a pledge to uphold segregation. The day’s activities included the unveiling of a plaque to mark the renaming of the Academic Building as the Holmes-Hunter Academic Building.

A more diverse UGA
Additional efforts have since been made to celebrate the courage of those who opened the doors to a more diverse UGA. The Graduate and Professional Scholars (GAPS) established an annual lecture series honoring Early in 2001, Hollowell was awarded an honorary UGA degree in 2002, and an honorary Doctor of Laws degree was bestowed on Jordan in 2007.

The Hamilton Holmes Professorship and the Charlayne Hunter-Gault Writer-in-Residence positions have been filled and searches are currently under way for professorships honoring Early and Hollowell.

UGA’s Russell Library now houses the Foot Soldier Project for Civil Rights Studies Collection, honoring largely unsung heroes including Early, who observed in a 2007 interview, “You have to appreciate the progress that has been made. . . a lot of good things have happened.”