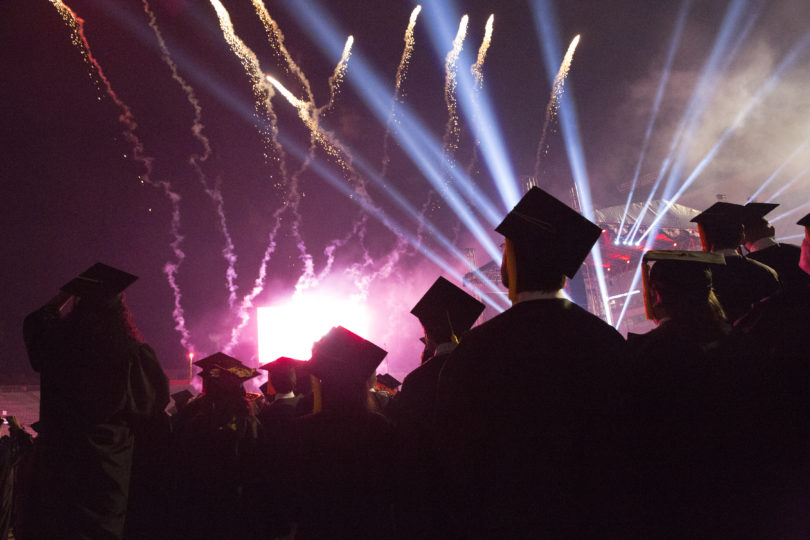 Students watch fireworks at the conclusion of a commencement ceremony. (UGA file photo)

The University of Georgia continues to be a top destination for students across Georgia and the country, as applications for the undergraduate Class of 2027 recently demonstrated.

Students from 49 states and Washington, D.C., including 125 counties across Georgia, applied for early acceptance to UGA, continuing the trend for rising academic excellence among incoming students. Admission was offered to those deemed academically superior: the group averaged a GPA of 4.26, SAT score of 1435, and an ACT score of 33.

“The outstanding academic qualifications of these admitted students affirms that demand for a University of Georgia education has never been greater,” said President Jere W. Morehead. “We are excited to see so much interest within the state and across the country in UGA, and we look forward to welcoming this talented group of students to campus next fall.”

The university received a record 26,000 applications for early action admission, up 21% from 21,500 last year. Applications have risen thanks to admissions recruitment efforts throughout the state of Georgia, as well as UGA’s growing national reputation.

“We are honored by the increased interest in the University of Georgia and by the strength of the students who applied,” said Barkley Barton II, director of undergraduate admissions at UGA. “The students we’ve admitted are resilient, accomplished and committed to being the difference in their communities in the future.”

The 8,200 admitted students earned exceptional grades on challenging coursework, having completed or being currently enrolled in a total of 8-13 AP, IB or dual enrollment courses.

Students who were deferred to the regular decision round will still be given full consideration for admission to UGA. For any student who received a deferral, Barton said not to be deterred.

“A deferral is not a final decision or rejection,” Barton said. “It gives students the opportunity to provide the university with more information as we take a deep dive into their file and look at the student as a whole.”